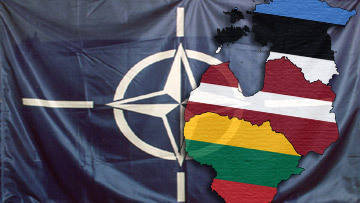 According to information contained in confidential US diplomatic telegrams, Washington and its Western allies for the first time after the end of the Cold War drew up secret military plans to protect the most vulnerable areas of Eastern Europe from Russian threats.

The US Department of State ordered a ban on disclosing this information when this decision was made at the beginning of the year. After January, the draft version of these plans was finalized.

In the event of armed aggression against Poland or the three Baltic states, nine divisions should enter into battle - from the USA, Britain, Germany and Poland. Naval landing forces, as well as warships from Britain and the United States, must arrive at the northern ports of Poland and Germany. According to informed sources, the first NATO exercises in the framework of this plan should be held in the Baltic next year.

After years of transatlantic disputes over the new policy, NATO leaders seem to have quietly endorsed this strategy at the November Lisbon summit.

Despite President Barack Obama’s policy of “resetting” relations with Russia, which was confirmed at the NATO summit, which was attended by Russian President Dmitry Medvedev, the State Department fears that major policy changes may cause “unnecessary tension” in relations with Moscow.

The decision to draw up contingency plans for Estonia, Latvia and Lithuania was taken this year secretly at the insistence of the United States and Germany at the headquarters of the alliance in Belgium. Thus, the ranks of the Western alliance put an end to the many years of disagreement in the views on Vladimir Putin’s Russia.

According to a secret telegram signed by US Secretary of State Hillary Clinton, this decision should initiate major changes in the NATO military planning system in Europe.

This strategy was not published - in accordance with NATO’s traditional reluctance to disclose details of its “contingency plans”, which provide for the collective efforts of the alliance to protect NATO member states.

Most likely, these plans lie in the vaults of the NATO Planning Office in the Belgian Mons.

According to a secret telegram from the US mission to NATO, the proposal to draw up defensive plans for the former Soviet republics of Lithuania, Latvia and Estonia was made by the commander-in-chief of NATO forces in Europe, Admiral James Stavridis.

These plans were submitted for consideration by high-ranking military leaders from the 28 member countries of the alliance. “On January 22, the NATO Military Committee approved them ... in accordance with the silence procedure,” the telegram notes. This is a decision made unanimously if someone does not come up with an objection.

Attempts by the predecessor of Stavridis, General John Craddock (John Craddock) to engage in defense planning in the interests of the Baltic states were hampered by the opposition in Western Europe led by Germany, which did not want to annoy the Kremlin. The decision to amend the policy was taken by high-ranking military, and not the highest decision-making body of NATO decisions - the North Atlantic Treaty Council. This was done in order to avoid a split and disputes on this issue, which lasted the last five years. According to the new plan, the Baltic countries and Poland are planned to be grouped into a new regional defense scheme, which is called the Eagle Guardian. Work on it is conducted all the past months.

In parallel with the negotiations with Warsaw, the United States offered to strengthen Polish security and defense against Russia by deploying special forces of the Naval Forces in the Baltic ports of Gdansk and Gdynia by deploying F-16 fighter squadrons on Polish territory, as well as sending there on a rotational basis from American bases in Germany transport aircraft С-130 "Hercules". All this information is presented in secret telegrams, which are almost always sent under the heading "Secret."

This year, the United States began deploying American Patriots in Poland on a rotational basis. Warsaw triumphed on this occasion, publicly stating that this step leads to the strengthening of the Polish air defense and demonstrates America’s dedication to the cause of Polish security.

But from the secret telegrams it becomes clear that the value of the "Patriots" is small and is purely symbolic. The batteries of these rockets, alternately placed in Morag in northeastern Poland, 65 kilometers from the Kaliningrad region, are used exclusively for training purposes. They are not combat-ready and do not include combat missiles.

At one point, the former deputy secretary of defense of Poland complained bitterly in private that the Americans could just as well send them "potted flowers."

By joining NATO in 2004, three Baltic states began to complain that they were being treated as second-rate members, since the leadership of the alliance ignored their requests for detailed defense plans in accordance with the requirement of Article 5 "one for all and all for one" . Article 5 is the basis of the NATO Treaty; it states that the alliance will come to the rescue of any of its members who have been attacked. This article was applied only once - after 11 September, when European allies and Canada rallied, supporting America.

The Poles and the Baltic countries have long stated that the rhetorical declarations of devotion to the 5 article are meaningless if there are no specific military planning measures behind them.

In the past three years, the demands of the Balts to provide them with firm security guarantees are getting louder.

It is believed that the cyber attack on Estonia in the 2007 year was carried out from Russia. A year later, the Kremlin invaded Georgia.

These countries became even more nervous last year, when the Russians conducted exercises to test the invasion of the Baltic states and to launch a nuclear strike on the territory of Poland.

However, appeals from Eastern Europe to provide firm security guarantees were hampered by Western Europe led by Germany, which did not want to cause enmity on the part of Russia.

“We found a way to move forward with Russia. The Baltic countries received strategic guarantees, a well-informed source said. - They found confirmation in the form of contingency plans, which were not there before. Now they are prepared. We told them that we would give such guarantees if they agreed to reboot with Russia. This eased the position of Germany. ” During last year’s intensive but confidential diplomatic efforts, the Americans managed to overcome resistance, and now the new policy is presented as a joint US-German initiative.

“Most of the information on this issue is not in the public domain. But the point now is that NATO has enough political will to deal with defense planning for the Baltic countries. The opposition has melted away over the past 18 months, ”says Tomas Valasek, a military analyst at the Center for European Reforms (Center for European Reform). This year, he worked with former US Secretary of State Madeleine Albright to draw up a "strategic concept" of NATO. NATO Secretary General Anders Fogh Rasmussen, along with representatives of the United States and Germany Ivo Daalder and Ulrich Brandenburg, reached agreement on a new policy at last December’s meeting in Brussels with NATO representatives from Poland and from the three Baltic countries.

"The representative of the United States Daalder said at this meeting that the proposal was initiated by Germany," - said in another secret telegram. Eastern European countries were happy. A high-ranking Estonian diplomat, Paul Teesalu, called this change of course “an early Christmas present” when he was told this news in Tallinn.

In another secret dispatch sent from the US embassy in Riga, it says that the representative for the security policy of the Latvian Foreign Ministry "expressed the great joy of his government."

The Poles, who have always advocated NATO’s specific plans for the defense of the Baltic states, are still concerned that because of the new policy, the alliance’s obligations to protect their country will be weakened, since the private and limited plan for the defense of Poland has become an expanded regional plan. four states.

Now the late deputy minister of defense of Poland Stanislav Komorowski (Stanislaw Komorowski) told US diplomats in Warsaw that he was "skeptical of such a regional approach, not considering it the best way forward." According to Komorowski, Warsaw would prefer a separate plan for Poland.

Komorowski, who worked as a Polish ambassador in London before 2004, became one of the 98 people who died with President Lech Kaczynski as a result of the April plane crash under the Russian city of Smolensk.

The Americans said that additional defense planning measures for the Baltic states would strengthen, rather than weaken, Polish security.

In January, when the decision was made, the State Department instructed US missions and embassies on how to proceed, making it clear that drawing up defense plans for the Baltic countries was the beginning of a more ambitious restructuring of the entire NATO military planning system.

“This is the first step in a multi-stage process of developing a whole range of relevant contingency plans to counter a variety of potential threats, both regional and functional. And these plans will be developed as fast as possible, ”the secret telegram says.

The diplomatic correspondence that the Guardian was able to see came from the State Department and from American embassies abroad, but not from the Pentagon and the CIA. This means that the telegrams reveal the policy and political decision-making processes, but do not contain specific data from the field of detailed military planning.

Details about the nine divisions that are planned to be used as part of the plan, as well as about the use of the port of Swinoujscie, located on the Baltic coast of Poland, were found out by the newspaper Gazeta Wyborcza.

It is clear that the defense plans of Poland and the Baltic States should be led by military leaders from the headquarters of the Joint Armed Forces of NATO in Europe, located in the Belgian Mons, and also from the headquarters of the combined forces of NATO in the Dutch city of Brunsum, which was the main nerve center responsible for the heyday of the Alliance at the peak of the Cold War.

The change in course promises tremendous changes in NATO’s military planning, as well as in the assessment of threats from a “growing Russia,” as the Polish representative said.

Officially, the United States and NATO call Russia a “partner” and not an adversary. Special respect for Moscow is shown by Germans, French and Italians. But Eastern Europeans, who have the bitter experience of Moscow domination over themselves, argue that Russians respect strength, despise weakness and divisions, and use them, and that NATO-Russia relations will improve only if the most unprotected members of the alliance feel safe .

“The point is not to present Russia as a threat. It is about reassuring those states that are seriously alarmed. The debate is mainly about Poland and the Baltic states. Geography is of great importance here, ”says Valasek.

Constantly urging to keep strictly secret military plans for the Baltic states, Clinton and other high-ranking American leaders claim that policy changes "can also lead to an unnecessary increase in tensions between NATO and Russia ... Washington firmly believes that the details of the NATO plans of action extraordinary circumstances should only be transmitted through confidential channels. ”