April 4 2013
24
In the comments to the article about the gun "Dart"able to conduct automatic fire with a fairly high pace and cutting off three rounds, it was suggested to get acquainted with another pistol that can shoot a burst, namely, the development pistol of Cesare Leclaire and Carlo Couppini. Weapon it was planned to be designed for self-defense, while the main idea was to use relatively weak and ineffective 6.35 Auto ammunition in automatic fire control, which, according to the designers, was to compensate for the shortcomings of these cartridges. Let's start, as usual, with the cartridges.

The .25ACP or 6,35 Browning cartridge was one of the most common self-defense weapons in the early twentieth century. Under this cartridge was released a huge number of various models of weapons that not only bought, but even used for self-defense. However, after using this ammunition, there was a high probability of getting an attacker "by schm", since the cartridge was far from being the most effective and stopped the attacker only if he had a very low pain threshold, or in case of damage to vital organs. In general, there was little confusion from such a baby, if it were otherwise, then a gun with the possibility of automatic fire under this ammunition would not have appeared. I found this cartridge in one of the domestic samples, namely in the Korovin pistol, but not in its original form, but with some changes, but this is already in another article. Weapons for this ammunition are made now, although it has not been in such demand for a long time as before, however, compact models based on this cartridge are acquired as an additional means of self-defense, in case the main weapon refuses.

The length of the cartridge case is 15,5 millimeters. Ammunition is loaded with a shell bullet weighing 3,25 grams, while the mass of the cartridge itself is equal to 5,3 grams. The mass of powder charge is 0,09 grams. The barrel of a weapon is 54 millimeter long, the bullet leaves at a speed of 228 meters per second, that is, its kinetic energy is about 92 Joule. In order to understand how weak this cartridge is, we can cite as an example those situations when the bullet of this cartridge could not penetrate a man’s forehead, of course, not when fired at an emphasis, but, nevertheless, though pleasant from such a hit, it seems to me few. In general, the effective range of weapons for a given ammunition is limited to 10 meters, and even with great reservations, since the ammunition itself is not effective. 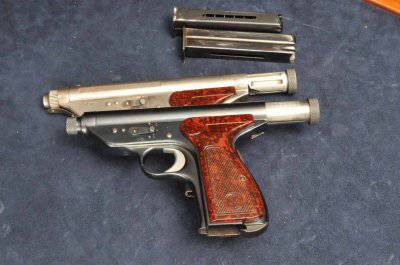 Actually it was with such a patron that the designers decided to work on creating their own pistol. The advantage of automatic fire at short distances in self-defense weapons, even with such a weak cartridge, is obvious. First of all, it is a multiply increasing chance to kill the enemy, and in a very short period of time. After all, weapons are used not to scare, but to protect life, and to protect life, all means are good, especially when the law is on the side of the defender. The second positive quality of automatic fire with weak ammunition at a short distance is that, in principle, it is not necessary to aim; a very small recoil of the weapon makes it possible not only to control the gun when firing, but also to fully control it during firing, it’s a pity that the shop weapons emptier very quickly. The 20 magazine's ammunition capacity was devastated with continuous fire for a second at an 1200 firing rate per minute. Initially it was planned to make a weapon with a larger magazine for 25 cartridges, but it was decided not to make a full-sized submachine gun from a self-defense weapon, therefore priority was given to reducing the weight and size of the weapon, and not to a large-capacity store, although I think 20 cartridges are enough "for eyes". By the way, even with twenty cartridges, the pistol turned out to be far from the lightest (930 grams) and not the most compact (184 millimeters long). 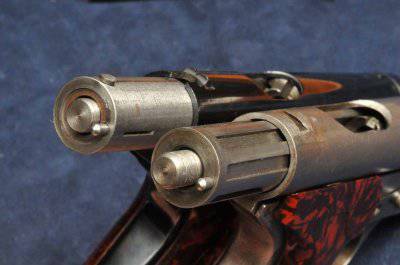 Automatic weapons was built by analogy with machine guns pistols, there was nothing new invented. The fire was fired from the open bolt, that is, before the shot it was necessary to take the bolt back. Much more interesting was how it was all arranged. The return spring of the pistol was located around the barrel, while the bolt itself had, in fact, the length of the weapon itself and moved along the barrel as if it were a guide. All this was collected in the receiver, which was a tube with a trunk fixed in it and an adjacent handle with a trigger mechanism. It is noteworthy that the trigger mechanism of the weapon was located under the barrel. The location of the trigger mechanism determined the location of the main elements of the weapon control, and also had a positive effect on its dimensions. Magazine gun is inserted into the shaft inside the handle, is fixed with a spring-loaded latch at the bottom of the handle. Sights are open, unregulated and, in fact, unnecessary. 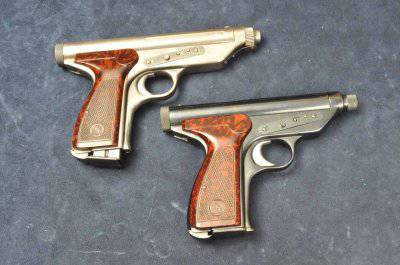 Unfortunately, or maybe not, the weapon did not become widespread, since the Italian authorities considered that such a compact submachine gun was too dangerous for the civilian population and especially for the Italian authorities. The police and the army also did not become interested in the pistol, since the cartridge was too weak. As a result, only about 150 units of these weapons were produced, which were “scattered” around the world. The designers did not dare to do something similar under a more effective ammunition, since this would have seriously affected the size and weight of the weapon, and the recoil of the gun would be unthinkable.

If you evaluate the weapon as a whole, then you can keep within just one word - “I WANT!”. Despite the fact that the cartridge in the weapon is frankly weak, the gun itself is not intended for use at long distances, and so on, this weapon is really an effective means of self-defense. Although it was possible that the possibility of automatic fire caught here, since if you turn on the mind and compare this sample with 20 cartridges in the store and something similar in weight and dimensions to 10-14 cartridges with .40S & W cartridges with expansive bullets, then it’s clear which side the audience will be sympathy. But still, the submachine gun in his pocket simply makes him want to be in possession of its essence. 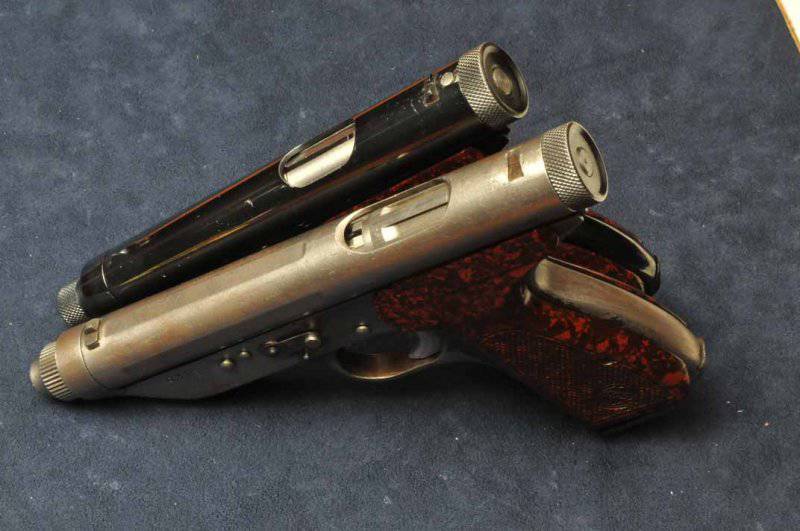 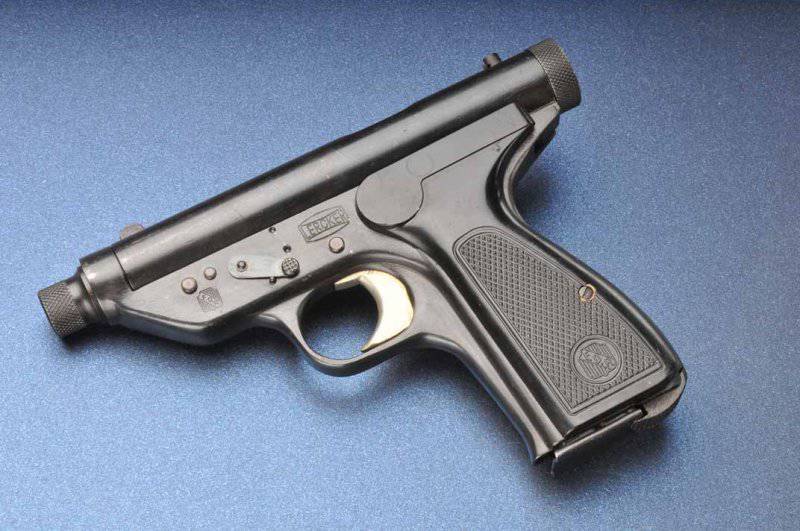 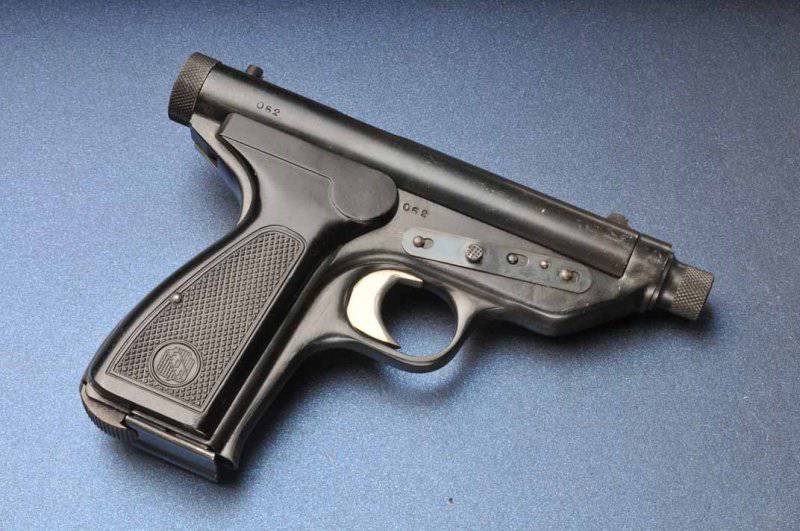 Ctrl Enter
Noticed a mistake Highlight text and press. Ctrl + Enter
We are
Gun Browning Model 1906 of the Year (FN Browning M 1906)Lerker Automatic Pistol
24 comments
Information
Dear reader, to leave comments on the publication, you must to register.