Why the cruiser "Rus" did not reach Tsushima? 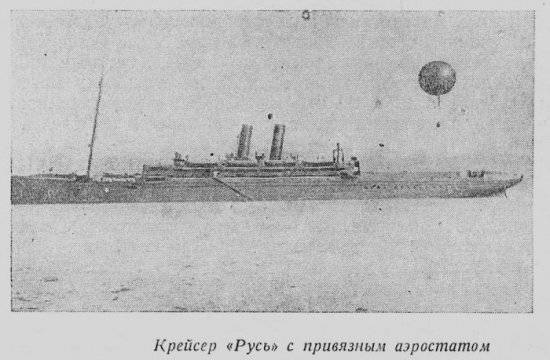 It is known that the squadron of Vice Admiral Zinovy ​​Petrovich Rozhestvensky was discovered by the Japanese with the help of a balloon raised from one of the ships of the Japanese squadron. This was one of the main causes of the death of the Russian squadron. Why Russian ships could not use balloons to detect the enemy?

It should be noted that by the beginning of the Russo-Japanese War, the Russian fleet did not have a single warship equipped with aeronautics. All applications of the Ministry of War for their purchase for the needs of the naval fleet were rejected S.Yu. Witte. However, the position of the Russian army on the Japanese front was critical, so Russian intelligence insisted that one of the ships, which were part of Rozhdestvensky’s squadron, be equipped with aeronautics. But, interestingly, there were no funds for this in the treasury. Then Count S. A Stroganov donated 1.500.000 rubles for the purchase of the ship and equipment with its balloon. With this money, a passenger ship with a displacement of 9000 tons with snake balloons was purchased from Severogermansky Lloyd Company. Hydrogen produced was obtained by the Schmidt electrolytic method. In addition, the ship also had an alkaline gas producing apparatus. (Auxiliary cruiser "Rus", Aeronaut, N 1, 1905, p. 43 -45).

A team of military balloonists was formed, consisting of Lieutenant Colonel Belyaev, Lieutenant Martens, Warrant Officer Dorozhinsky, Mechanic Rosenberg, and Captain Reinfeld. Ship enrolled in the rank of cruisers and called it "Rus". After that, strange events began to occur. The aeronautical cruiser was supposed to join the squadron of Rozhdestvensky, but soon after its exit from Libau, one of the boilers refused. A small repair was made, but a strange command came from the maritime department that the cruiser “Rus” should return to Libau. Apparently, someone from the top leadership of the Russian naval forces was not interested in strengthening Rozhdestvensky's squadron with such an intelligence ship that could warn of the deployment of enemy ships.

The Navy Department decided that the balloon could not be used. “The ball, for which Rus is adapted, also cannot be used for military purposes and constitutes a cargo, which can only be used under particularly favorable conditions, which are almost never at sea.” A report with such a text was sent to the Chief of the Main Naval Staff Admiral F. K. Avelin from the commander of the Baltic Fleet, A.A. Birileva. What can be said about such a decision? It can hardly be called a mistake. Russian intelligence officers reported that the Japanese widely used aeronautical means for military purposes, including in the naval forces. It is not surprising that in the midst of the battle at Mukden the balloons — the eyes of the Russian army — were out of service due to the lack of materials that produced hydrogen. Although at the beginning of January 1905, the commander of the 1 Aeronautical Battalion, A. M. Kovanko, reported to St. Petersburg that it was necessary to urgently send additional materials to charge the cylinders.

Is it simply negligent to call it that in the decisive battles the Russian fleet did not have modern technical means of reconnaissance? Probably not. Someone experienced hand in the Supreme military leadership of Russia confidently pushed the country to defeat in the war with Japan to change the political system in Russia.