Nededeputat from Smolensk, or At the peak of bureaucratic impudence

March 29 2013
139
Questions of the moral character of representatives of the bureaucratic front are often discussed in the media. With the arrival in the information world of, say, a large Internet, the opportunity to analyze the words and actions of Russian officials at various levels has been taken to a new level. The fact that even a decade and a half ago could have gone unnoticed, zamylitsya in the daily bustle, bureaucratic red tape, today may become known to millions of people in just a few minutes of virtual broadcast. Thanks to the Internet, it became known about the work of one of the representatives of the Smolensk deputies corps, who allowed himself something for which an official not only needs to be deprived of all his ranks and positions, but also prosecuted. However, about everything in order. 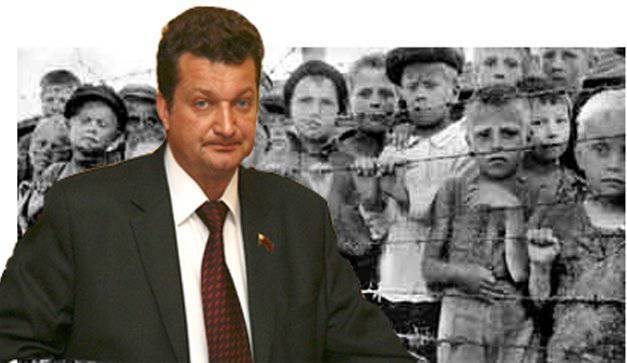 October 2012 of the year. Hero City Smolensk. Local lawmakers at the current meeting of the Smolensk city council, devoted to problems in the social sphere, discussed the topic of free travel in the city of war veterans and those categories of citizens who were equated to veterans. However, for some reason, there were no residents of Smolensk among the beneficiaries, who in childhood became prisoners of the Nazi concentration camps. Regional lawmakers began to discuss what need and juvenile prisoners of concentration camps to add to the list of beneficiaries in terms of their right to free travel. And while the deputies figured out how many such persons now live in Smolensk, and when Germany stopped paying compensation to the victims of Nazism in Russia, such a legislator as Andrei Ershov, who positioned himself as the ideological supporter of the United Russia party, put in his withering remark. Mr. Yershov was indignant at the fact that it was necessary to provide any benefits to the victims of Nazism, saying literally the following:
“What do we owe them?” What they did not finish off? "

This humiliating dignity of all, without exception, people who have experienced the agony of concentration camps, has caused laughter in the conference room. Apparently, one of the assembled deputies liked the words of Ershov that he personally did not owe the prisoners anything, and that the Nazis didn’t finish off the Russian children. But, thank God, there were those in the hall of the Smolensk city council and those who tried to reason with a truly brazen city official. Here is one of the quotes, which is the answer to Andrei Yershov and those who actually supported his idea with their laughter:
"It's not funny! We owe them that the state failed to ensure their happy childhood. They remained in the occupation. I am obliged to those who could not stop the fascists on the border.

However, this response was not perceived by the deputy Ershov. He expressed his point of view on this issue, in fact having trampled upon his own polished deputy's boot the very foundations of respectful attitude both to the older generation of Russians in general and to those citizens of the country in particular who have experienced all the horrors of Nazism.
After such statements, the deputy should have expected a fair punishment, which is based not only on judicial decisions, but on the moral component of his act. However, further developments show how perverted today are such concepts as morality and ethics, as well as bureaucratic responsibility for their words and actions.

The words of Ershov were heard by those former juvenile prisoners of German concentration camps, whom the deputy called “unfinished”. Two women (N. Khatutskaya and A. Podlesnaya) from among the former prisoners decided to sue the Smolensk deputy and one of the points of the claim indicated compensation for moral damage in the amount of 50 thousand rubles each. The industrial court of the hero-city of Smolensk decided that Mr. Yershov would not pull compensation for 50 thousand rubles to insulted old women, and awarded the deputy a payment of 10 thousand rubles each of the plaintiffs.

Then something happened that can be called a grimace of legality. Deputy Ershov expressed the words that he was misinterpreted, that he had something completely different in mind, and that he would not pay any compensation to anyone at all, and filed an appeal ... It would seem that the court had to reject the appeal without fail and add compensation to Ershov undisguised bureaucratic impudence. However, the Smolensk court not only did not add anything, but in addition also satisfied the appeal of Ershov. They say that a deputy should not really compensate anyone or anything ...

It turns out that the judge who issued the final verdict, in fact, directly agrees with the words of the deputy Ershov that “they were not finished off”, and that no one is obliged to the prisoners of the concentration camps ... If so, then the judge who made this decision together with the deputy Ershov, excuse me I want to see not in their soft armchairs, but in completely different places - in those places where the degree of those hardships and deprivations that children in Nazi camps were forced to endure is better.
It should be noted that one of the plaintiffs (N. Khatutskaya) did not live up to a humiliating court decision, and the second (A. Pododnaya, who survived the horrors of Auschwitz and lost her mother in the gas chambers of this death camp) after the news of the actual indulgence for MP Ershov had a heart attack.

History with the statement of the deputy Ershov and the acquittal judgment caused a wide response in Smolensk. After the words and actions of their colleague, United Russia’s deputies deleted Yershov from their ranks and suggested that they voluntarily resign their parliamentary powers. However, here Mr. Ershov decided that he was not obliged to anyone, and said that he was not going to hand over his deputy mandate, because he did not see any reason for this.

After all these Ershov forts, it remains to hope for the last chance of punishment for a presumptuous regional official, over whom neither his colleagues in the legislative department nor the representatives of the civil court were in power. This chance is criminal prosecution under Article 282 of the Criminal Code of the Russian Federation, which declares responsibility for actions that are aimed at degrading the dignity of a person or a group of people belonging to a social environment that has been committed publicly.
The punishment for this article for a person who violated the law using his official position is as follows: a fine of up to 500 thousand rubles, or deprivation of the right to hold certain positions for up to 5 years, or compulsory work for up to 240 hours, or correctional work for a term from one year to 2's, or imprisonment for up to 5 years.

Let us hope that this time the court of Smolensk will take the right decision in relation to the deputy Ershov. For example, they will finally deprive of their posts and force them to redeem obscene words and actions with real work for the benefit of the city and its citizens: clearing snow in the yards of houses of former juvenile prisoners of concentration camps, scooping out city drain holes and watching a film about that in short breaks between work. than he - Mr. Ershov - is obliged to people who have eradicated the brown plague.