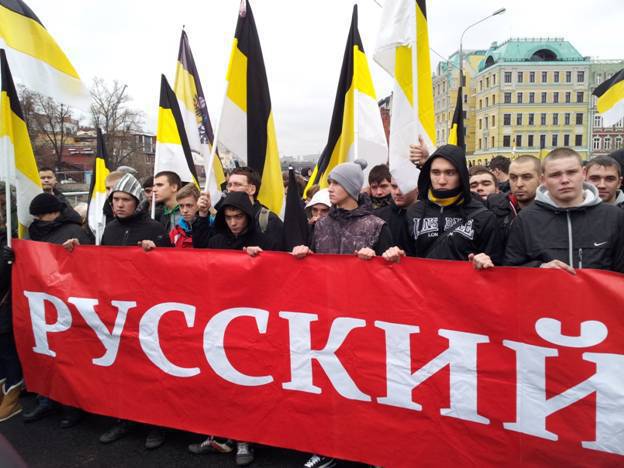 But there is little hope for such a development.


The nationalist movement in Russia has already matured in order to speak on topical issues of our time, not only at local venues, but also from the rostrum of parliament. The expert working group of the Public Chamber of the Russian Federation on the analysis and resolution of interethnic conflicts came to this conclusion. The work was ordered by the well-known Public Design Institute (INOP), which is listed among those close to United Russia.

The study of the working group, as reported to Izvestia by its head, Mikhail Romanov, consisted in analyzing the assessments of the experts interviewed, monitoring the media and studying sociological polls. And by all signs, as Mr. Romanov noted, the nationalist movement in Russia is slowly but surely gaining political weight. Yes, at present, nationalist forces are generally weak, and if elections were held this Sunday, even a reduced entry barrier in 5% would not help them to claim seats in the Duma. But until 2016, there is still enough time, the publication interlocutor hinted.

By the way, a survey conducted last autumn by sociologists at the Levada Center showed that trust in nationalist forces in society is indeed great. The respondents' sympathies for them turned out to be stronger than those for the same Communists, who until now were de facto considered to be “2 strength” after United Russia. The last nationalists in the polls are still losing.

And are the nationalists themselves ready to pull the mandate burden? In a conversation with a KM.RU columnist, some prominent figures of the Russian nationalist movement shared their thoughts on this subject.

- There are objective reasons for the fact that Russian nationalism is becoming the dominant worldview of our fellow citizens, although, of course, in the domestic sphere, it still looks primitive. One of the main reasons for this is rampant ethnic crime. There are lots of others that nationalists talk about every day. But there are also subjective reasons for such public support. They are generally related to the fact that Russian nationalism for many years was the main target of repression in Russia.

Hence the reason, which does not allow nationalists to create an influential organization: during all these years, a great many instigators and adventurers were introduced into the Russian movement, who literally tore the movement into pieces and eventually led him to the "belolentochnym" liberal protest. Now only begins a serious process of cleansing the movement of these ideological impurities, of adventurers who have been fooling their heads for many years.

Another subjective factor is the seduction, seduction of the leaders of the Russian movement with various posts in the public service. A number of influential people today, who were once brought up within the Russian patriotic movement, now meekly serve the interests of the ruling group, and, of course, as nationalists, they have completely discredited themselves. Behind them there is neither an understanding of what Russian nationalism is, nor a desire to support the Russian national movement: they have not been engaged in this for several years. The frontier moment here is 2007 the year when the Rodina party was defeated and the registration of the Great Russia party was denied, which tried to replace it with an already more solid ideological foundation.

So, on the one hand, there really are serious prerequisites for the fact that Russian nationalists will not only share power with United Russia, but also completely take power away from it, this party itself will be eliminated, and its leadership will fall under the policy of lustration. But, on the other hand, the current repressive activities of the Kremlin administration, the “creativity” of political technologists who organize slanderous campaigns, and the systematic destruction of Russian national organizations do not yet allow Russian nationalists to form some more or less solid organization on an even ideological and organizational basis.

Many more years will pass before the Russian movement really stands on its feet, but this, again, will occur against the background of an economic catastrophe, which this year has already fully indicated its signs. It is hoped that the formation of an influential nationalist force in these conditions will only accelerate, but, on the other hand, I would not want the nationalists to take power in the country in the context of national and economic catastrophe.

Therefore, the sooner the government comes to its senses, the sooner it stops its disastrous policy, the sooner it transfers the control of the country to the nationalists, the faster the consequences of a severe economic crisis and political unrest can be overcome.

- If we even had a more or less transparent political system, which would not be artificially limited by any manipulations, unlawful influence of various kinds of power structures, which constantly prohibit someone, recognize as extremists, imprison, start criminal cases, and so on, if not such a deforming effect on the political situation, the more or less imputed political force of the nationalist plan would be, I think, completely the first in number and power. Because nationalists are the only force that is not afraid to talk about the pressing urgent problems that society has. And, speaking of these problems, the nationalists adhere to, in general, a fairly reasonable and adequate political program.

On the main spectrum of political issues, the position of the nationalist implies a high degree of compliance with the demands of society. Accordingly, a political nationalist force (but serious, not a clown) would almost certainly be a political leader now. But perhaps this is one of the main reasons why the authorities simply do not allow parties to take on a more or less national bias: they save potential leaders, push them out of politics, do not allow anything more or less intelligible to form in the legal field.

Against this background, another problem becomes relevant: the nationalists have already become so accustomed to the long-term underground, have developed a specific style of relations (smallness in small things, a tendency to not always adequate positions on issues not related to national issues) that they, I am afraid, simply will not have time to form into an adequate powerful political force of a nationalistic character, even if suddenly now the power will give them the opportunity to express themselves in full, will give every opportunity to convey their position to the maximum a good audience. This is a serious limitation.

Yes, it is not known how realistic the future elections will reflect the real alignment of political views in our society, but it is also not known how much the nationalists themselves are organizationally ready for political action in principle. So far, we can state the sad fact: so far no intelligible nationalist political force has been formed, and those parties that have been created have not yet been registered, and it is not known whether they will receive it.

Chairman of the Council of the National Democratic Party, President of the Russian Public Movement Konstantin Krylov:

- First of all: the opinion of society here in any case will not play a special role. Our government itself decides whom it wants to see in the State Duma, and who does not. However, of course, it can be assumed that the government will take into account the wishes and needs of citizens and at least allow those parties that can actually receive public support for the elections. In this case, if these elections are more or less fair, most likely, nationalists and their parties will be able to get enough votes to get to the Duma. This is possible, although perhaps not immediately.

But what the nationalists will do in the Duma, is already highly dependent on how many there will be in it. It is clear that this, again, does not depend on us, but on the intentions of the authorities, whether it wants to take into account the opinion of the public or would prefer to continue using the Duma as a “furious printer”. It is clear that the nationalists, to put it mildly, are not very suitable for this role. They are unlikely to stamp without looking at all the laws that power wants. And this, you see, is a completely different calico.

The modern agenda of the nationalists is the national liberation struggle aimed at social equality. The nationalists are trying to ensure that Russians in Russia are recognized as full-fledged people, that they are given the rights that some other Russian people now have, in order to equalize their rights with Caucasians. Nationalists advocate, on the one hand, for a moderate social state, and on the other, for stopping the "nightmares" of business, for more comfortable conditions for economic activity. All this does not imply any particular aggression, which the authorities are afraid of the average man. Nationalists in this regard now represent a true "party of peace", and in fact to a much greater extent than those forces that deliberately position themselves in this vein.

So nationalists do not have any brutality and aggression, but there is a bad reputation created by Kremlin political technologists, who have long convinced the entire population of the country that nationalists are people who wish evil to their own people. It is clear that this is all slander, but long and painstaking work was carried out on its creation, when nationalists were literally exposed as monsters, “covering up” legal nationalists in the actions of extremist groups, which, by and large, are not nationalistic either. They taught that the nationalist is a person who is going to beat someone, while the nationalist does not want to be beaten by him and his people.

Ctrl Enter
Noticed a mistake Highlight text and press. Ctrl + Enter
We are
Military reform as an integral part of the security concept of the Russian Federation: Systematic dynamic assessmentThe death of the elder brother. The lessons of the crises China teaches very carefully
120 comments
Information
Dear reader, to leave comments on the publication, you must to register.