Season of the winds and shelling 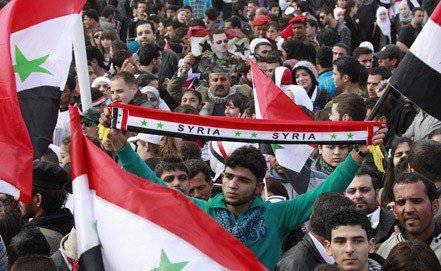 The season of strong, disturbing winds began in Damascus. A squall raids - and trees are bending, linen is being pulled down on balconies and even satellite antennas are breaking, palm leaves are fluttering in the wind ... But the proud flags on flagpoles are fluttering more and more beautifully ...


The wind season began along with the mortar shelling season. 26 March The Baramka metropolitan area became a target of terrorists. The terrorists fired 5 shells on it, which landed in the courtyard of the Syrian news agency SANA building, the girls' school, the school for gifted children, the building of the law faculty of the University of Damascus. Unfortunately, there are dead — employees of an information agency (the gangsters are fighting for such “freedom of speech”), a schoolgirl girl (also, apparently, an “enemy of democracy”), a teacher (another “opponent of freedom”).

On the same day, another terrorist act took place - in the Rukn-ed-Din area a suicide bomber blew himself up in a minibus. 3 man died, the rest injured.

Against this background, the Arab League provided Syria with representatives of the armed “opposition” —in fact, it seated outright villains and bandits at its table.

It must be said that Syria was the initiator of the creation of the League of Arab States on the principles of unity of the Arab nation, mutual aid and cooperation. However, at present this League has turned into a puppet organ of the monarchies of the Persian Gulf - loyal allies of the United States. These monarchist regimes can disperse demonstrations, arrange public medieval executions, prohibit women from driving a car, and there’s no question of elections. They can do whatever they want with impunity with impunity - they will not be held accountable for violating human rights and the lack of democracy.

It is worth remembering the disgraceful role played by the League of Arab States in the destruction of the Libyan Jamahiriya. Instead of the principle of mutual assistance, the principle of “kill your neighbor” reigned in the Arab League - and the League spoke in favor of foreign intervention in the affairs of a sovereign state. Syria voted against this decision. Algeria abstained. The rest obediently called on the heads of Libyans, on their prosperous cities, NATO bombs that did not take long to wait ...

Soon after, Syria got its revenge. Not only for this, of course. The West and its allies have long been irritated by the independent policy of the SAR, which did not want to carry out the will of the colonialists and their puppets. But it is very characteristic that Syria was punished a few days after it came out against an armed attack on the Libyan Jamahiriya - at first riots broke out in Syrian cities, then the membership of Syria in the Arab League was suspended. But a few weeks ago, a traitor to the Syrian people — ex-Prime Minister Riyad Hijab, who had fled — first voiced the idea of ​​giving Syria a place in the League of the so-called “opposition”. And heard the traitor.

With the filing of Qatar, the legitimate place of Syria was given to representatives of mercenary gangs who destroy the country and kill its citizens. Iraq, Algeria and Sudan opposed this decision. Lebanon abstained from voting.

The decision is absolutely illegal, it is categorically contrary to the principles on which the Arab League was created and to international law. But nevertheless, the leader of the so-called “opposition”, who had fled the former preacher in the Umayyad mosque, took an empty seat, and the legitimate Syrian flag was replaced with a rag from the times of French colonialism.

This is how Vitaly Churkin, Permanent Representative of the Russian Federation to the UN, commented on this decision: “This means that the League of Arab States has finally pulled itself out of the search for a political solution to the crisis.” He pointed out that the provision of an “opposition” seat in the Arab League, which belongs to Damascus by right, involves legal issues: “Syria was not expelled from the League, its membership was suspended. Generally, all история With the suspension of Syria’s membership in the League of Arab States, from the very beginning of the crisis it was said that it was not set up for serious negotiation decisions. ”

Churkin recalled that in December 2011, the Arab League decided to send an observer mission to Syria. But she did not work even a month - as soon as she began to give objective information, the mission was immediately turned down.

And how they put pressure on Syria to accept this mission of observers! Threatened with sanctions in case of failure. According to the advice of the Russian Federation, the Syrian leadership accepted the mission, but the sanctions were still imposed, and the mission was withdrawn as soon as its report no longer pleased Qatar and Saudi Arabia. Now the rightful place is given to the head of the coalition created in Qatar, Muazu Al-Khatib.

The latter went even further in his betrayal. A few days before the LAS summit, he announced his resignation, complained that the West did not give him the opportunity to act independently (where and what puppet in history acted independently?) That is, he tried to pretend to be a patriot. But then he changed his mind - at least for the sake of the chair in the Arab League. Now the patriot mask is completely dropped by him. He called on the US to protect the gangs of the "opposition" in the north of the country with the help of the Patriot missile systems. Such a “patriotic patriot” ... Even the accomplices of the fascists in the USSR were more carefully disguised.

However, the United States so far refuse. White House spokesman Jay Carney said that the US administration is aware of such a request, but this time it does not intend to introduce armed forces into Syria. “I think that the Patriot missile batteries that are deployed in Turkey can only serve as a means of protection,” he said. At the same time, NATO representatives said that a military operation against Syria is not planned.

It should only be recalled: the same NATO members declared before the attack on the Libyan Jamahiriya. It means that it will be possible to once again evaluate the veracity of NATO words.

Ctrl Enter
Noticed a mistake Highlight text and press. Ctrl + Enter
We are
Who blew up Turkey? The explosion in Istanbul and the "wave of terror" on Turkish soilSyria: Americans scare themselves, and Asma Asad buys chairs
17 comments
Information
Dear reader, to leave comments on the publication, you must to register.