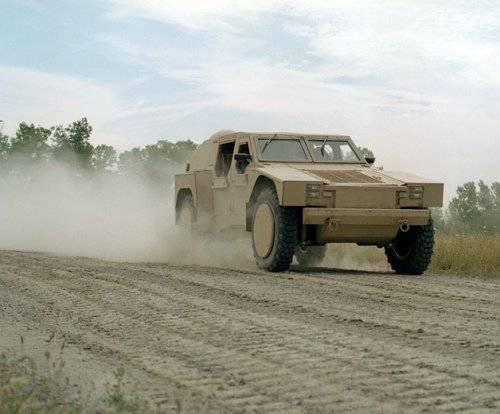 The US Marine Corps and the US Army Special Operations Command are closely following the development program for the new vehicle called the Shadow, intended for deep breakthrough and deep intelligence. Shadow RST-V (Reconnaissance, Surveillance, Targeting Vehicle) was developed by General Dynamics Land Systems. It was developed for the Marine Corps Warfighting Laboratory with funding from the DARPA (Agency for Advanced Defense Research Projects) and the Office of Naval Research (Office of Naval Research, ONR). 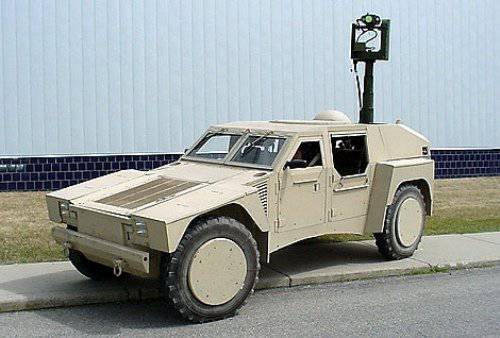 The Shadow RST-V has significantly improved fuel economy and survivability and can be transported in the inner compartments of the CH-53 and CH-46 helicopters, the V-22 convertiplane and the C-130 transport aircraft. The C-5 Galaxy transport aircraft is capable of carrying up to 21 Shadow, and the C-17 Globemaster up to 12. 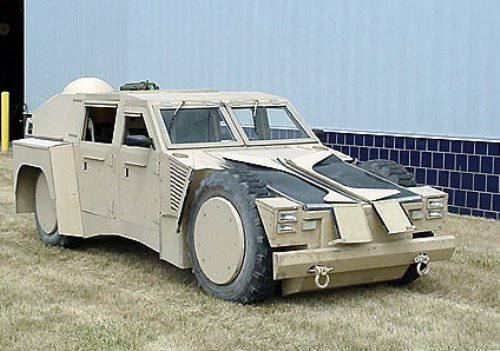 Program development car intelligence, surveillance, targeting Shadow
In 1997, ONR and DARPA signed a contract with General Dynamics Land Systems (GDLS) and Lockheed Martin Missiles and Fire Control to develop a new intelligence vehicle, which can be performed in a number of ways depending on the task being performed. The vehicle is currently used by the US Marine Corps as a high-speed assault vehicle M151 A2 and the US Army as a general High Mobility Multi-purpose Wheeled Vehicle (HMMWV).

In 1999, GDLS was awarded a contract for the second phase of the Shadow RST-V development program, which involves assembling four cars of demonstrators, as well as the option to build additional 39 cars. The main subcontractors are: Magnet Motors from Germany, responsible for electric drives and controls, General Dynamics from Canada (formerly Computing Devices Canada), responsible for integrating intelligence, surveillance and targeting systems, and Signature Research, which integrates survivability subsystems. 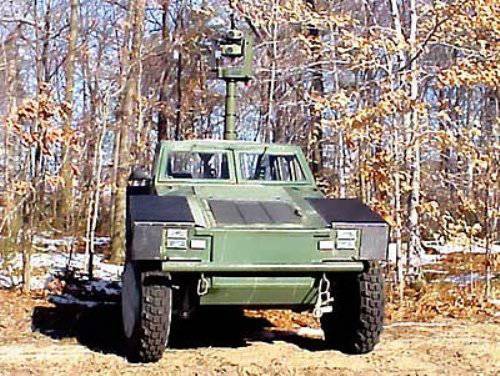 Four RST-V vehicles equipped for a specific mission were delivered in 2002. This was followed by the testing of the Limited User Evaluation Yuma test site in Arizona in 2004.

In May 2005, GDLS was awarded a contract to upgrade RST-V. The upgrade supports the ongoing operational assessment of the vehicle as a universal carrier, main engine and electric generator for the various tasks of the United States Marine Corps. The upgrade included the ability to provide external consumers with 30 kW of power produced by the hybrid electric vehicle. This could feed, for example, the center of the task force and radar. 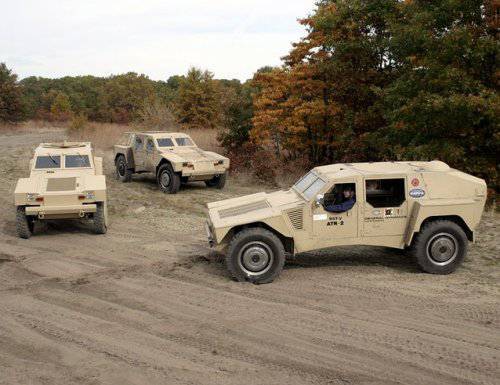 Shadow RST-V car design
The crew of the Shadow RST-V consists of four people. Crew seats are supplied by Oregon Aero and are located along the center of the car. It is possible to install bulletproof front and side windows. On the sides of the car are two doors, rampa in the aft part provides access to the inner cargo compartment.
The car is made of aluminum housing. Additional armor package provides protection from small arms weapons and min. 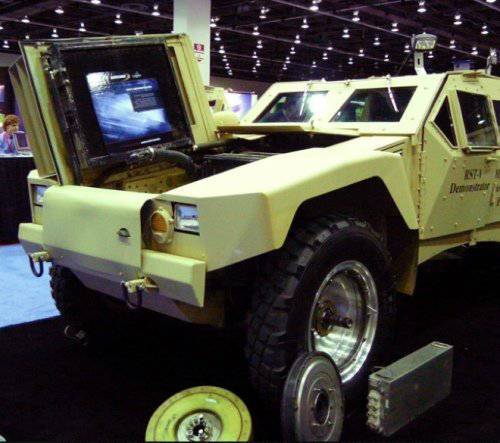 Shadow weapon systems
Machine guns of caliber 7.62-mm, 12.7-mm, 40-mm grenade launcher, Objective-Crew Served Weapon, OCSW, Javelin or TOW ATGM can be mounted on the sunroof.
Shadow can be equipped with special protective kits, including a radar, a warning system for laser irradiation and a warning system for a rocket attack. 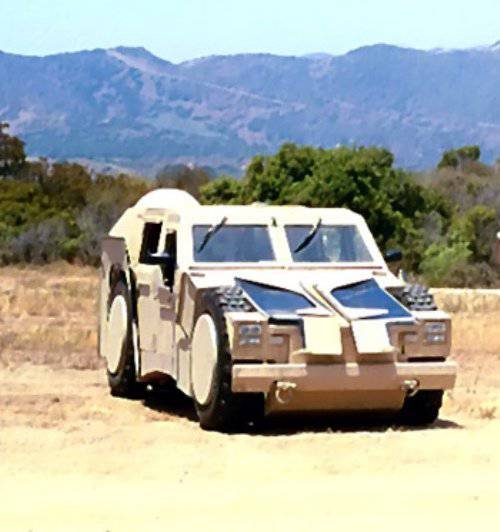 Surveillance systems
The three-meter retractable mast mounted on the Shadow is equipped with a set of electro-optical sensors. The monitoring kit was developed by General Dynamics - Canada and includes a dual-field day and thermal imaging sensor operating at wavelengths from 3 to 5 μm, as well as a Northrop Grumman (Lightweight Laser Designator and Ranger) laser finder and range finder. The sensor set is coupled with an inertial navigation system, a global positioning system and a compass from Smiths Industries with azimuthal accuracy to 3.6 mil. 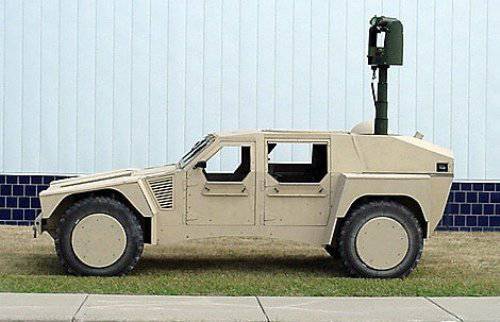 Power point
The Shadow RST-V is equipped with a hybrid electric drive based on a front-mounted diesel engine with direct injection and turbocharging. The 2.5-liter DI-4B supplied by Detroit Diesel has a capacity of 114 kW. The diesel feeds a permanent magnet generator from Magnet Motors with an 110 kW power that feeds four 50 kilowatt permanent magnet engines from Magnet Motors mounted on each Shadow wheel. The electrical system also includes a dual SAFT Li-Ion battery with a total rated power of 20 kWh and a peak power of 80 kW.

The car is equipped with a pneumatic suspension capable of reducing ground clearance to 10, see. This is enough for transportation on the tiltrotor V-22. The base of the Shadow is made in the form of an arch to allow it to overcome the angle of the ramp of the aircraft, which also contributes to an increase in maneuverability on rough terrain. 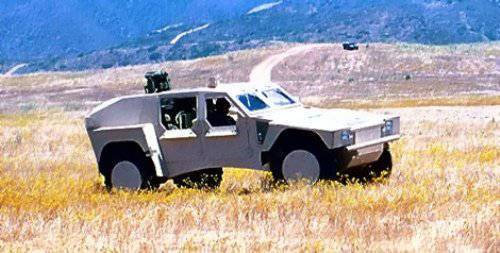 Hybrid electric drive
The hybrid electric drive allows the car to operate in a hidden, hybrid and only motor modes. In stealth mode, the Shadow can only be powered by a battery, which provides a significant reduction in acoustic and thermal signatures.

During maneuvers that require sharp acceleration or maximum torque to overcome steep climbs or to recharge the battery, Shadow works in a hybrid mode, using energy from a diesel engine and consumes energy from batteries or recharges them as needed. Shadow only uses the engine if the batteries are completely discharged, or when they are not used at all. 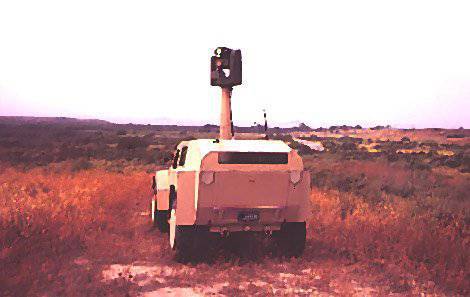 The absence of a conventional mechanical gearbox allowed us to create a car interior with the same internal volume as the HMMWV and still fit into the tiltrotor V-22. Built-in redundancy in the design of the engine gives the commander Shadow the opportunity to continue driving or return to a safe place with just one drive in the wheel. 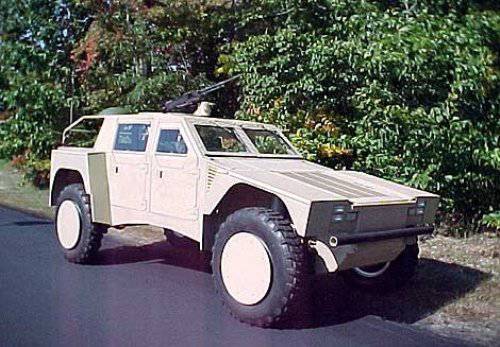