March 28 2013
86
In South African Durban, the 5 Summit of the BRICS States opened its work, which include Russia, Brazil, India and the PRC in addition to the South African host. Despite the fact that the summit for the Russian side began quite problematically: some representatives of the delegation and the personal security of President Vladimir Putin were far from everywhere allowed without additional proceedings from the South African intelligence services, then everything went more smoothly. 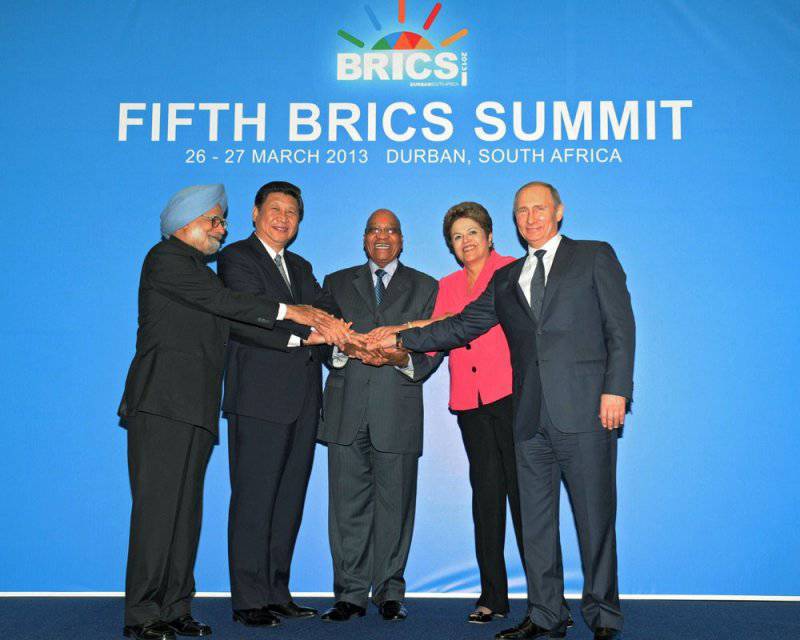 The BRICS summit held in South Africa has attracted truly impressive attention from the world community and experts. Apparently, the times when the fours, and then the five actively developing countries of the world, looked condescendingly at meetings and agreements, sank into oblivion. Today’s interest in what the leaders of the five states gathered in Durban are going to discuss is so great that it is hard to ignore. It should be noted that no less attention to the summit of the leaders of the BRICS riveted by the United States and the European Union, which until recently the very idea of ​​the economic integration of countries on different continents, was perceived extremely skeptical. Today, the future of the entire world economy really depends on the decisions that can be reached at the BRICS summit. And these are by no means empty words.

It is noteworthy that in their statements, the leaders of the countries who arrived at the South African summit almost in one voice called the current financial system obsolete and in need of significant changes.

It is worth noting that one of the main issues to be discussed at the BRICS summit in Durban is the issue related to the formation of the BRICS development bank. If such a financial institution really appears, it can become an impressive alternative to the International Monetary Fund, which, although under the jurisdiction of the UN, actually serves the interests of only those states that advocate the so-called Western principles of economic development. In fact, the IMF has long become a sort of big soap bubble, which by its appearance only creates the illusion of the colorful and richness of modern economic reality.
In addition to the IMF alternative, the World Bank, which has only one name left from the real “world” value, can push the BRIM from its Olympus. The tasks that were initially assigned to the World Bank (WB), namely, the elimination of poverty and hunger, the improvement of maternal health, the fight against HIV / AIDS, the formation of an equal global partnership, have not yet been solved (since December 1945), and the methods of solving them cause many questions. These techniques are based on the use of a cross-credit system, which, as economic practice shows, has finally become obsolete. The global financial crisis, which is rolling in waves on all without exception of the economy, demonstrates the complete inconsistency of the financial system by which the world continues to live today.

If the leaders of the BRICS countries agree to establish their own bank, then it will be hostile to the organizations listed above. Already, representatives of the World Bank say that the BRICS Development Bank, if it is established, can turn into a slow financial education, which will take years to start full-fledged work. Nobody expected anything else from the World Bank ... Those who understand that a financial competitor may appear in the financial market, who will be able to promote their political decisions with their economic power, will say anything they want to reduce the significance of the hypothetically possible financial institution. created by BRICS. After all, today the same United States of America through its financial institutions, bearing the big names of "international", almost single-handedly promote their interests on a planetary scale. And what can happen if an influential financial institution emerges in the world, over which Washington will have no control? The following will happen: an alternative variant of economic and, as a result, political development will simply be determined. This can be called the emergence of a new economic and political pole, which is able to reformat the system that is taking place now.

Everyone remembers the classic Soviet expression of “decaying capitalism”. I would not like to use stamps, but, apparently, the situation, which is based on multi-stage mutual lending with the lack of a real basis for the security of the consumer boom - this is the same rotten ... If today the BRICS leaders succeed in reaching agreements on the organization of a qualitatively new financial institution, then it will be a real alternative to the rotten economic fruit that the world is forced to eat today. The difference here is only that while some states manage to bite off that part of the fruit that has not yet had time to rot, while others have to eat “flesh-and-dumb” or not to eat at all ... And where is the World Bank, where is the IMF, which should rectify the situation? And they are in their places - places where there is no desire to solve macroeconomic problems ... Or the solution of these problems is carried out in such a way that takes into account the interests of an extremely narrow circle of states that are shadows and stand behind the leaders of these financial organizations.

If the new BRICS development bank, through which it will be possible to invest in one or another global project, is really created, then the main thing for the top five countries is to prevent the very possibility of influencing the old players, the main one among which is the US . To do this in the present conditions, of course, is not easy. But as they say, if you think well and if you abandon economic prejudice, then things will move in the right direction. The first step should be the refusal of payments at the level of the BRICS Development Bank from the US dollar and the transition to an alternative currency. Let it be all five currencies of the BRICS countries, which will initially lead to some inconvenience, but a definite step will be taken. The West will receive, as is customary to say, a message from the BRICS countries that it is time to move on to real and open economic competition, which is simply not present in the world today.

One of the main supporters of the creation of the BRICS development bank is the Russian leader Vladimir Putin. Here are his words on this occasion:

“A good support in this work, of course, will be the creation of the BRICS development bank. In this regard, I would like to note that Russia is in favor of creating this financial institution. But we proceed from the fact that if it is created, then it will work exclusively on market principles and will support the business community of all our countries. ”

Putin on other issues of the summit:

“Within the framework of BRICS, work is underway to help developing and least developed economies, including our African friends and partners. Today, following the summit, development banks of our countries will sign agreements on co-financing projects in the field of infrastructure and "green energy". I am sure that they will be a good help and a good field for the application of the forces of companies from the BRICS countries. ”

How ready the other leaders of the BRICS are to support the relevant initiatives will be known in the near future. Will there be enough healthy enthusiasm and pragmatism, or will Big Brother once again tilt the scales to his side ...

PS After the meetings and consultations, the leaders of the BRICS countries have not yet decided to support the proposal of Vladimir Putin in Durban, however, they agreed that the issue of implementing the idea of ​​creating a BRICS development bank should be returned in the near future. Apparently, the leaders of the five are still lacking political will. Well, we will wait when it appears ...

Ctrl Enter
Noticed oshЫbku Highlight text and press. Ctrl + Enter
We are
Who does Russia offer on the development of BRICS?BRICS: friendship against the dollar
Military Reviewin Yandex News
Military Reviewin Google News
86 comments
Information
Dear reader, to leave comments on the publication, you must to register.