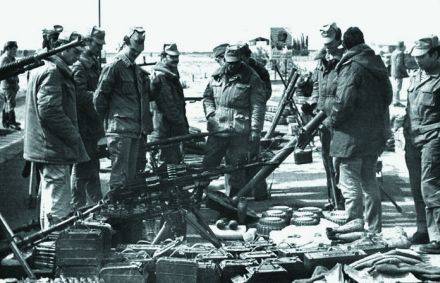 February 1986 of the year for the Kandahar special forces squad turned out to be quite hot. In less than a month, it was possible to prepare and conduct two special operations to capture and liquidate large bases of militants in their area of ​​responsibility. In this case, only one person died in the detachment and ten were injured. The main difficulties in performing the task arose due to poor interaction with the attached forces. That is what caused the loss.


Information about the object was obtained from the air reconnaissance at the very beginning of February. Pilots established a large number of pack animals loaded with bales from the Pakistani border to the west, deep into Kandahar province. Tracing the path of the caravans, the pilots found that they all moved in the direction of the gorge in the mountains of Hadigar.

The commander of the 238 Aviation Regiment, Colonel Rutskoi, attempted to reconnoiter the gorge on the Su-25, but was fired from large-caliber anti-aircraft installations.

He reported on this fact to the Chief of Staff of the Turkestan Military District, Lieutenant General Gusev, who ordered a bomb attack attack on the gorge. When trying to re-conduct air reconnaissance of the gorge, the planes again came under fire. This led to the conclusion that targets in the area are not suppressed. To solve this problem, a BSHU was applied along the gorge at certain intervals for two days.

After the bombing was completed, an inspection team headed by Senior Lieutenant A. Parshin was sent to the district to verify its results. The landing task was not set. However, under the cover of helicopters of fire support, using the surprise factor, the group landed on the edge of the gorge at the guard post and seized anti-tank mines and ammunition packs. arms. During the evacuation of the group, one of the Mi-24 helicopters received damage from anti-aircraft machine-gun fire, but arrived independently at the airfield.

For the manifested self-sufficiency Parshin received a disciplinary sanction from the commander of the detachment of captain S. Bokhan. However, the information obtained by the group helped to establish that, although the object was subjected to long bombardments, it continues to function successfully. It was also possible to establish that the gorge was covered by four air defense positions that included in their 2-3 heavy machine gun DShK. Long-term firing positions, well equipped in engineering terms, were located on the ridges of the ridges, two on each side of the gorge. These positions were key.
In this regard, it was decided to conduct the seizure of the gorge in the mountains of Hadigar.

The idea was developed by 173 ooSpN. For its execution, the special forces detachment had to create the ROSPN No. 300 as part of the forward detachment - BG No. 310 and four assault groups.

Command ROSpN number 300 was Captain Bohan. His forces and means for the operation of the Kandahar detachment were not enough. Therefore, we had to involve neighboring 370 ooSpN for the formation of a reserve consisting of two groups. But even the involvement of these units did not allow to create the necessary grouping of forces. To this end, it was decided to use the attached forces and facilities of the 70 ombsbr as part of the air assault battalion, tank battalion, and artillery division of the howitzer D-30.

A number of serious tasks during the operation were to be solved. aviation. For this, from 280 airborne squadrons, the Mi-8MT squadron, the Mi-24 squadron were assigned, and from 238 oshap, the Su-25 link was assigned.

In accordance with the plan, the forward detachment consisting of four BMP-2s with a landing force from the 1 Company 173 ooSpN commanded by deputy battalion commander Captain K. Nevzorov, moving at the head of the 70 military equipment ombsbr, would ensure its promotion along the intended route through the populated Tahtapul, Bar-Mehl, Nargal, Graklay-Makiyen points. The 8.00 column was ordered to arrive at the gorge in the mountains of Hadigar.
Attached forces under the command of the deputy commander of 70 Ombra Lieutenant Colonel Nikolenko led by the vanguard began to move in 00.00 5 February 1986 of the year in the direction of the mountains Hadigar on the specified route.

The assault assault battalion was supposed to occupy initial positions in readiness to support the actions of special-purpose groups.
The Mi-24 squadron and two Su-25 units from 8.30 to 9.00 planned to inflict a secondary angle on the air defense positions and landing sites of special forces with the aim of inflicting maximum fire damage on the enemy and to prevent the Mujahideen from countering the defenses at the landing stage.

Four special-purpose groups were to parachute to the indicated sites in order to use bold and decisive actions to destroy the ASC’s calculations, to seize their positions and inflict fire damage on the enemy in the gorge.

The assault assault battalion was to enter the fortified area after it was captured by special forces and to inspect the elements of its infrastructure under the cover of the RGSpN fire. 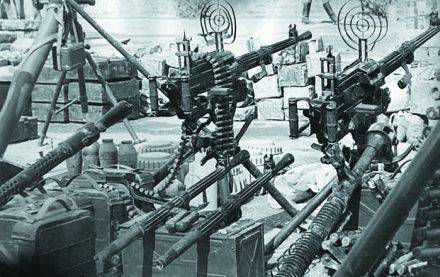 Capture. 4 February 1986, Lieutenant General Gusev, who led the operation, set the task for all of its participants.

When setting tasks, special attention was paid to the secrecy of actions and interaction. To this end, Lieutenant General Gusev paid special attention to the order of communication and work in the general network.

To ensure the secrecy of 70, the OMSBR began pulling out a column of military equipment at dusk, and not in the daytime, as was usual.

At midnight, the advance party began to move. Following him came the column units 70 omsbr. She initially moved along the Kandahar-Chaman highway in the direction of Pakistan. The mechanics of the vanguard, who had extensive experience of night driving, drove, not including headlights. The rest of the column went with the headlights on.

After about 50 kilometers, the vanguard turned left off the road and headed north over rough terrain. An important role in the fulfillment of the task of the advanced detachment was played by an excellent knowledge of the area of ​​operations by senior lieutenant S. Krivenko.

In 7.40, the forward detachment arrived at the designated point, as reported to the CBU. From there, it was reported that the commander of 173 ooSpN Captain Bohan flew to organize the advanced KP and directly control the course of the operation. The shelling of the positions of the Mujahideen began in 8.00. In strict accordance with the plan of the operation in 8.30, the shelling stopped and aircraft began to work. By this time, arrived and Captain Bohan.

In 9.00, immediately after the last BSHU, eight Mi-8MT helicopters with troops on board, taking advantage of the fact that the calculations of air defense weapons were in shelters at that time, made an amphibious landing.

In total, four special forces were landed, which in a short battle suppressed the weak resistance of the enemy and captured key positions in the fortified area of ​​Mount Hadigar. Part of the rebels who were in the gorge was destroyed, and some hastily retreated to the south-east. The fight ended with 9.30. After that, the assault battalion was given the command to enter the gorge and conduct a thorough inspection to identify warehouses, positions and other elements of the infrastructure of the fortified area.

However, information that the fortified area had already been captured by special forces was not communicated to company commanders. Therefore, the battalion began to act as usual during the capture: one company went along the left slope, another along the right, and another company began to move along the bottom of the gorge. The common frequencies of interaction, as well as the mutual identification signals, to the commanders of companies and platoons were also not communicated. Because of this, the company, which was on the right side, came across a group commanded by Lieutenant Marchenko.

The paratroopers, having found people on the mountain, took them for the enemy and opened fire. As a result, one of the scouts was wounded. Neither the attempt to communicate by radio, nor the giving of light signals “I have my own” led to nothing. A scream of fire hit the scouts. Special Forces officers contacted the advanced command post with a request to get in touch with the commander of the assault assault battalion. But he left the air and did not respond to requests.

When the paratroopers came closer, they collapsed ... selective Russian mate. It finally stopped them and made them think. Some time later, they asked the question: “Who are you?” When they realized that they were special forces, they were surprised to ask: “What are you doing here?” They were answered in the most accessible form, and then they were forced to contact their own and warn them that Heights also works spetsnaz. Only after this, the fighters went down and proceeded to the inspection and unloading of the gorge.

There were so many trophies that it was not possible to load them onto cars on the first day. In order to eliminate the likelihood of the return of the Mujahideen to the gorge under cover of darkness, three special forces groups were left in the occupied positions.

However, the command of 70 OMSBR also did not bring this information to its officers. As a result, about 21.00 positions of one of the groups came under fire from D-30 howitzers. By luck, no one was hurt. An attempt to contact the gunners on the radio for a cease-fire did not lead to anything. Only the personal intervention of Captain Bohan, who arrived on armor, helped to cease fire.

The next day, the export of trophies resumed. In 17.00, the combat vehicle column began to move to a point of permanent deployment along a somewhat modified route. In the morning, captured trophies were put out on the 70 parachute in front of the headquarters building.

Lieutenant General Gusev conducted an analysis of the operation, noting the clear and coordinated actions of the special forces and the poor organization of actions in the motorized rifle brigade, which led to the only loss by the Soviet troops to the intelligence officer of one of the RGSpN.

As the agents reported, the fortified area of ​​the “Mountain of Hadigar” was recently created by the Mujahideen to counterbalance the formations of “General Istmat”, who had gone over to the government with their detachment based in the Adigar Mountains, located south of the Hadigar mountains for 10-15 kilometers. The destruction of the Mujahideen base for a long time stabilized the situation in the area.

In conclusion of the analysis of the operation, Lieutenant General Gusev said that such a practice should be developed, and set the task for Captain Bohan to plan another capture object and prepare the operation for his next visit. Bokhan immediately reported that such an object exists - the base area of ​​Vsachichignay. The commander of the Turkestan Military District gave two weeks to prepare the operation.

Ctrl Enter
Noticed oshЫbku Highlight text and press. Ctrl + Enter
We are
Twice a Survivor, or Against DeathTactics of the Afghan insurgents
Military Reviewin Yandex News
Military Reviewin Google News
13 comments
Information
Dear reader, to leave comments on the publication, you must to register.