Putin: Russia and South Africa are negotiating the supply of aircraft MC-21 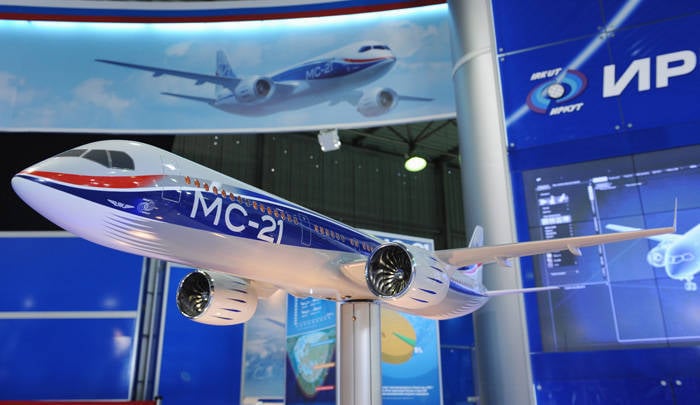 The program for creating the MS-21 family is a project of the United Aircraft Corporation, the main executor of which is Irkut Corporation. The program is included in the federal target program “Development of civil aviation Russian technicians for 2002-2010 and for the period until 2015. ” The family includes two aircraft: MS-21-200 (150 seats), MS-21-300 (181 seats) in the basic two-class layout.

This year, 21 billion 12 million rubles will be allocated from the federal budget for the implementation of the program for creating airplanes of the MS-400 family.

In early March, it was reported that the United Aircraft Corporation (UAC) began the development of a wide-body modification of the MC-21 aircraft.

Ansat is a Russian light multipurpose helicopter developed by the design bureau of Kazan Helicopter Plant OJSC. According to the developer, the "Ansat" helicopter with a PW 207K engine from Pratt & Whitney can be used to transport goods and passengers, be used for surveillance, search and rescue and medical evacuation operations. " It can accommodate up to nine passengers, carrying capacity - 1300 kg (inside the cabin). In addition, the developers presented the Ansat-2RTs light combat helicopter. The Russian Air Force is armed with four such vehicles.

The president also said that Russia is ready to provide credit support to South Africa in case of construction of nuclear power units by Russian specialists.

"Russia offers assistance in creating not just separate units in South Africa, but an entire advanced nuclear industry: from the extraction of raw materials, the construction of nuclear power plants and research reactors to the design and production of its own atomic electrical equipment with credit support from the Russian side," Putin said.

According to the head of the Russian state, a quantum-optical system to increase the accuracy of receiving the GLONASS signal in the southern hemisphere will be installed in South Africa.

“In South Africa, they will install a quantum-optical system to increase the accuracy of receiving the GLONASS signal in the southern hemisphere,” Putin said.

He also noted that the space center in South Africa will be used to receive data from a Russian satellite on the Radioastron project. The corresponding document was signed on Tuesday following the summit talks.

The International Astrophysical Observatory Radioastron was created by order of Roskosmos. The radio telescope should work in conjunction with the global terrestrial network of radio telescopes, forming a single ground-space interferometer of very high angular resolution.

With the help of Radioastron, scientists intend to study the processes inside active galactic nuclei and near supermassive black holes, dark matter, the structure and dynamics of star-forming regions in our Galaxy. In addition, the telescope should help to create a high-precision astronomical coordinate system and a high-precision model of the gravitational field of the Earth.

Russia and South Africa intend to increase by several times the volume of mutual trade, which in 2012 amounted to almost 1 billion dollars, the Russian president told reporters.

“Our countries have a good base for increasing cooperation. In 2012, turnover increased by 66,3% and reached nearly 1 billion dollars. In 2011, it was almost half as much, ”Putin said.

He stressed that in the medium term "they intend to increase the volume of mutual trade several times."