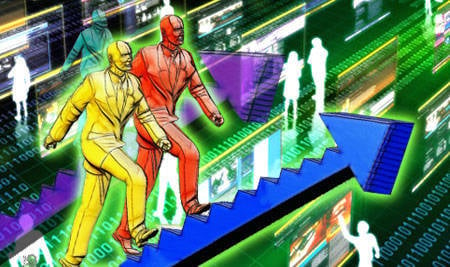 Just a month ago, I wrote about one such - the Gaidar Forum, where for four days they also discussed the future of Russia with great fanfare. I was struck then by a huge number of invited foreign scholars, mostly Americans, whose speeches were more like a political action program than a scientific or expert assessment of events taking place in Russia. And most importantly, I was struck by the ideological attitude of the Gaidar Forum. In each speech, a sharply liberal direction of economic and political thought was traced. And this happened in a country where, as we all know, according to opinion polls, from 60 to 80 percent of citizens have a negative attitude to any liberal reforms. It just so happened that the liberal ideas discredited themselves in the most difficult years of the existence of the new Russia - the dashing nineties. The society has not yet forgotten the general impoverishment of the absolute majority of citizens, which was the result of government actions to liberalize the economy under the leadership of Yegor Gaidar. And for almost the same majority today, liberalism is synonymous with disaster.


It is no coincidence, as some scientific studies show, that no more than ten percent of the population now supports liberal trends and right-wing movements. Perhaps that is why, at the Gaidar Forum, it would seem that all aspects of liberalization were affected, except for one thing: how the society will perceive the liberal reforms. This question was left out of the discussion. For four days they talked about Russia, but they forgot about the Russians. Whether supporters of liberal reforms considered this irrelevant, or deliberately excluded the question from their concepts, believing that the Russians would only support such reforms. In my opinion, this is a big mistake. Do not support their citizens, even forcibly.

But I am sure they will support the ideas and reforms that were proposed at the Moscow Economic Forum. Because at the basis of the speeches made by politicians, economists, businessmen and scientists who came here from almost all the continents, one thought sounded: it is time to change the existing system of relations between man and the economy. Not a person should be for the economy, and the economy for the person. So, by the way, the forum itself was called: “Economics for a man is a new economic strategy of Russia”. This is a completely new approach to the development of the Russian state, and the approach is very attractive and promising, because people and ideas of social justice, so close and understandable to all Russians, are being put at the center of social relations. Moreover, they are even recorded in the current Constitution of the country. Already in the second article of the first chapter we read: "A man, his rights and freedoms are the highest value." And the article of the seventh of the same chapter directly states: "The Russian Federation is a social state, whose policy is aimed at creating the conditions that ensure a decent life and the free development of man."

I do not know whether the authors of the current Constitution of the Russian Federation were supporters of social democratic ideas. Perhaps, unwittingly, they laid them at the heart of the country's legislation. Because it is in social democracy that man is the core, the center of the whole system of social relations. It is for the benefit and development of the personality that the social democratic model of the existence of the state has been created and is used, which is applied in many states of the world. No economic freedom, which is the platform of the liberal model, will not give such human development and economic development that we need today and will need in the future.

Moreover, the liberal economic model and a purely capitalist system of relations in this sphere are close to collapse. Perhaps even this line has already been crossed.

These are not my statements. So say many of the major foreign economists who spoke at the forum. For example, Yale University professor Immanul Wallerstein, ex-chancellor of Austria Alfred Gusenbauer, former Finance Minister of Poland Grzegorz Kolodko. They said that the future of the Russian economy was not in wild capitalism, but in its socially oriented model. Professor Keren Pfeifer representing Smith College (USA) shook the forum with a statement (I quote): “You can’t imagine what kind of positive changes in the economic and political situation in Russia will be a bomb for the US and the EU if your country refuses the neoliberal model of development” .

If you think about it, the American professor is right. The Russian Federation, with its colossal natural resources and with a good human potential, is located in the very center of the Eurasian continent, occupying a huge part of it, which makes its geostrategic and geopolitical position very advantageous. And therefore, I am very sorry that the words of the professor were not heard by the people on whom the choice of economic course depends. The forum was not even visited by the Deputy Prime Minister Arkady Dvorkovich, announced for participation in it. Officials, of course, were. Presidential Advisor Sergey Glazyev, Vice-President of the Russian Academy of Sciences Zhores Alferov, First Deputy Chairman of the State Duma Committee on Budget and Taxes Oksana Dmitrieva, President of Russian Railways Vladimir Yakunin, Rector of Moscow State University Viktor Sadovnichy, Director of the Institute of Economics of the Russian Academy of Sciences Ruslan Grinberg and several others.

These people are well known in the country, and therefore the level of the forum has certainly turned out to be solid. But can it be considered sufficient to discuss such an important topic as Russia's economic development strategy? The highest political and economic elite, in fact, ignored this forum. It is a pity: the speeches of its participants turned out to be much more interesting than on Gaidar, and more useful for understanding the situation. Their ideas would be useful when choosing a path of development, when all options for movement should be considered. However, maybe this path has already been chosen, and Russia, unwittingly, is being drawn into the neoliberal reforms imposed on us from without?

God forbid, if so!

Ctrl Enter
Noticed oshЫbku Highlight text and press. Ctrl + Enter
We are
About Stalin and KhrushchevThey talked about Russia. Here are just forgot about the Russians
Military Reviewin Yandex News
Military Reviewin Google News
23 comments
Information
Dear reader, to leave comments on the publication, you must to register.