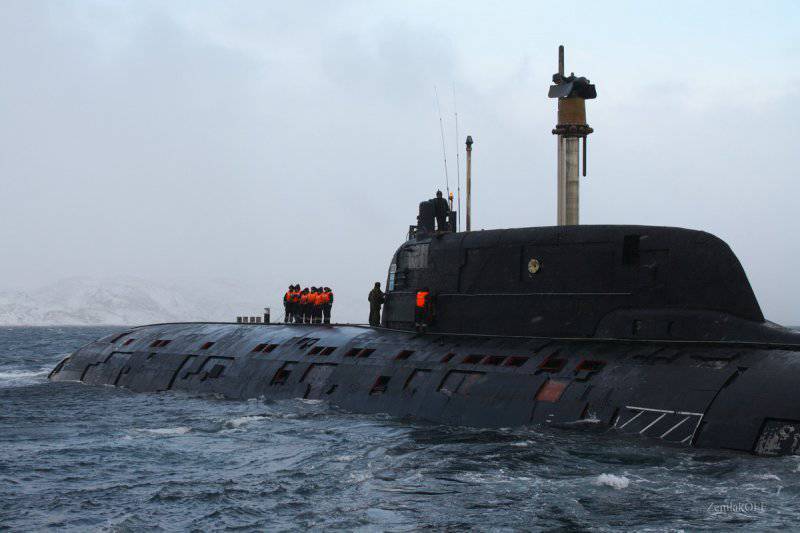 Titanium - an element of the periodic system of chemical elements Mendeleev, atomic number 22. A light metal of a silvery hue with a half that of iron and a density and melting point of + 1660 ° С. Titanium is used for the manufacture of durable and high-quality things - reactor fittings, structural elements aviation and space technology, body armor and cases of expensive watches, dental implants and special tools.
And the Soviet Union was so steep and rich that it “molded” the whole submarine hull from titanium!

The unique K-162 submarine (661 “Anchar” project) is a record not reported by TASS. The K-162 underwater nuclear-powered missile cruiser could accelerate at a depth of 44,85 knots (≈83 km / h). Special features required special technical solutions - for the first time K-162 stories World shipbuilding was completely made of titanium. 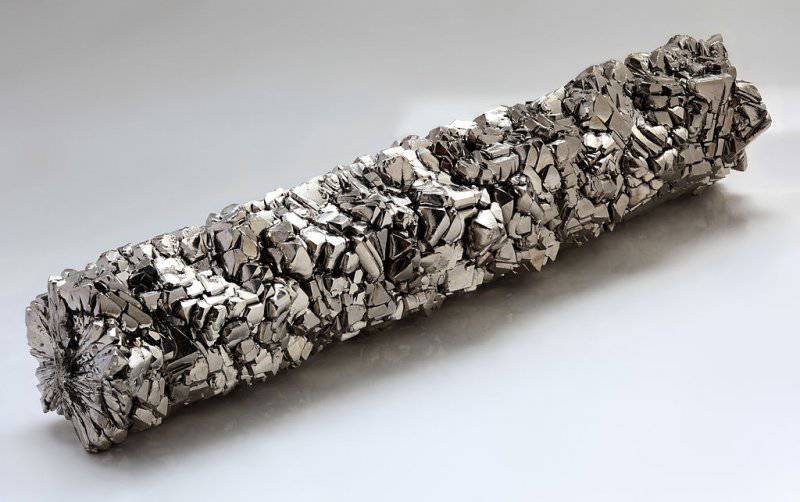 Crystal Titanium Bar
A series of submarines with titanium hulls of the project 705K (cipher "Lira") - seven high-speed submarine killers capable of developing underwater 41-nodal course. "Lyra" could pursue any enemy of the sea and just as easily escape from prosecution. They needed about 1 minutes to accelerate to full speed, and the circulation with a turn to 180 ° was performed in just 42 seconds! Outstanding speed and maneuverability characteristics allowed the 705K boats to evade enemy torpedoes and attack the enemy from an unexpected direction.

The “submarine fighters” of the 705K project often became the object of criticism for its excessive complexity and poor choice of power plant - a reactor with a liquid metal coolant, despite its high power density, every second was a deadly threat to the crew of the boat. Even in the base, the ZhMT reactor always required external heat supply - the slightest accident on the heating main could lead to a catastrophe. Nevertheless, the Lyra, in spite of all the “probable opponents,” honestly served in the Soviet Navy. Despite a number of serious accidents, none of the Lear was lost. And not a single person died in the struggle for their vitality.

Another record holder is The Elusive Mike. That is what the American sailors called the Soviet experimental submarine K-278 "Komsomolets" (project 685 "Fin") with a maximum depth of more than 1 kilometer. Lightweight and durable titanium hull withstand tremendous water pressure - in August 1985, the Komsomolets set the absolute world record for diving depth for submarines - 1027 meters! Falling into the cold, impenetrable mist, the K-278 became completely undetectable for the enemy anti-submarine weapons. At the same time, already at a depth of 800 meters, still remaining undetectable and invulnerable, the Komsomol member could use his torpedo weapon 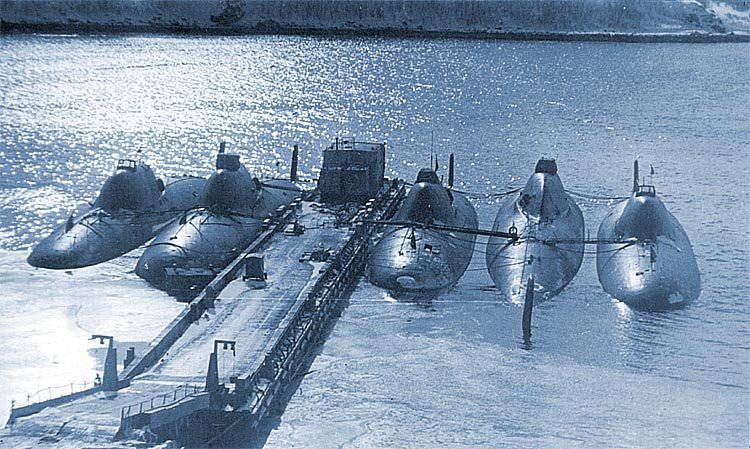 Small merciless killers of the project 705K (the cipher "Lira")
Titanium alloys were used in the manufacture of robust hulls of the giant "Sharks" (SSBN project 941). At about the same time, the industry of the Soviet Union began the serial construction of third-generation multipurpose nuclear submarines with titanium hulls under the 945 project (cipher "Barracuda") and, a little later, according to the improved project 945А (cipher "Condor").
Unique boats are still of considerable value, and it is precisely with their existence that the next 2013 intrigue of the year is connected.

According to a statement published in early March, the Russian Ministry of Defense and Zvezdochka Center Ship Repair OJSC signed a contract to restore technical readiness through repairs with the modernization of two nuclear submarines with K-239 B-276 Kostroma (former K -276 "Crab") of the 945 project. In the future, such upgrades will be carried out by the B-336 Pskov and B-534 Nizhny Novgorod - submarine nuclear-powered project 945А.

Modernization of titanium submarines should raise their combat capabilities to a new level. The boats will be equipped with a new modification of the OK-650 reactor (a unified power plant of all Russian nuclear ships 3 and 4 generations), the sonar complex of submarines will be replaced, and the Caliber missiles will appear in the arsenal. Radio electronics will be radically updated, active noise absorbers will appear, instead of the usual periscope, installation of a multi-purpose mast with video cameras and laser range finders is possible - everyone on the central post, and not just the officer at the periscope eyepiece, can observe the surface situation.

New technologies in the durable titanium case of the “Soviet hardening” should turn the modernized “Condors” and “Barracudas” into a storm of the seas; In their totality of characteristics, old nuclear-powered ships will not yield to submarines of the new, fourth generation.

The representative of the Ministry of Defense stressed that the decision to return titanium submarines to the composition of the Navy's permanent readiness forces was made in January, and the first stage of the modernization of the K-B nuclear submarine B-239 will begin in the summer of 2013. It was noted that the Russian Defense Ministry had returned to the idea of ​​restoring four titanium submarines in connection with the problems of saturation of the Navy with new ships. First of all, this concerns delays in the construction of the fourth-generation multi-purpose submarines of the 885 "Ash" project. 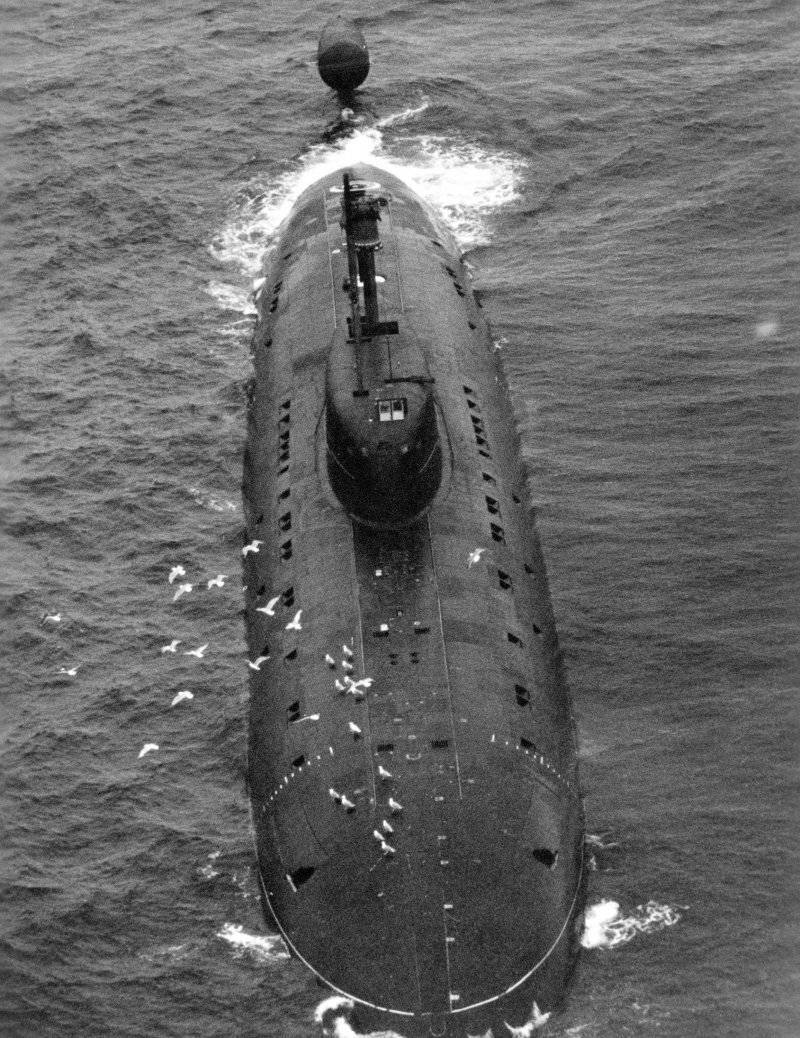 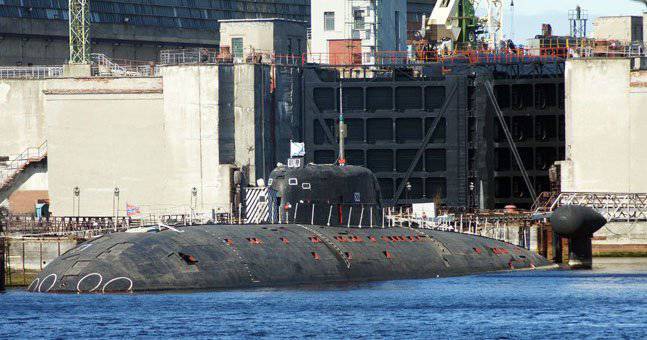 Carp these days. The boat was withdrawn from the North fleet in 1998 year

It is intended for searching and tracking submarines and surface ships of a potential enemy, attacking naval targets.

The two-part design, the strong case is made of titanium, consists of 6 compartments;

"Barracuda" and "Condor" ships are not simple - the titanium case opened up absolutely amazing prospects for Soviet submariners. First of all, the high strength and low density of titanium made it possible to achieve almost twice the strength with the usual ratio of load items (hull weight is about 40% of the standard displacement of the submarine). As a result, the “Barracuda” had a 1,5-2 times more than the working depth of the dive than any of the Soviet boats of the previous generation and promising foreign analogs - it could sink into the depths up to half a kilometer, while still having the ability to use torpedo weapons and speeds! The Condor plunged even deeper - to 600 meters.

For comparison, their peers, the multi-purpose American submarine of the type "Los Angeles" rarely worked at depths above 250 meters. The maximum depth for an American submarine is called within 450 meters.
Of course, the combat capabilities of modern boats are determined not only by the speed of travel and the depth of immersion, but the magnificent combination of large working depths and high speeds of the underwater course of the Soviet "Condors" and "Barracudas" is commendable.

Separately, it is worth mentioning about reliability and durability - titanium is not susceptible to corrosion, the barracudus titanium cases of the 30-year-olds still retain their original “shine” under a layer of rotted sound-absorbing rubber coating.
Finally, another important advantage of the titanium hull is a radical reduction in the magnetic field of the boat.

There is only one drawback - the high price and complexity of manufacturing a titanium case ... but, fortunately, we are no longer faced with such a problem. The Soviet industry was engaged in the manufacture of titanium cases, the super-boats were built many years ago - which means you only need to change the “stuffing” and thank the USSR for its great heritage.

The Kildin Island incident, which occurred in February 1992, best describes the strength of these submarines: the Russian submarine K-276 Kostroma (the same “titanium” project 945) accidentally collided with the American submarine Baton Rouge ( USS Baton Rouge SSN-689). At that moment, when the Baton Rouge was at a periscope depth, it suddenly came under the ram attack of a emerging Soviet submarine — the Kostroma struck with its wheelhouse directly into the center of the American spy's corps. 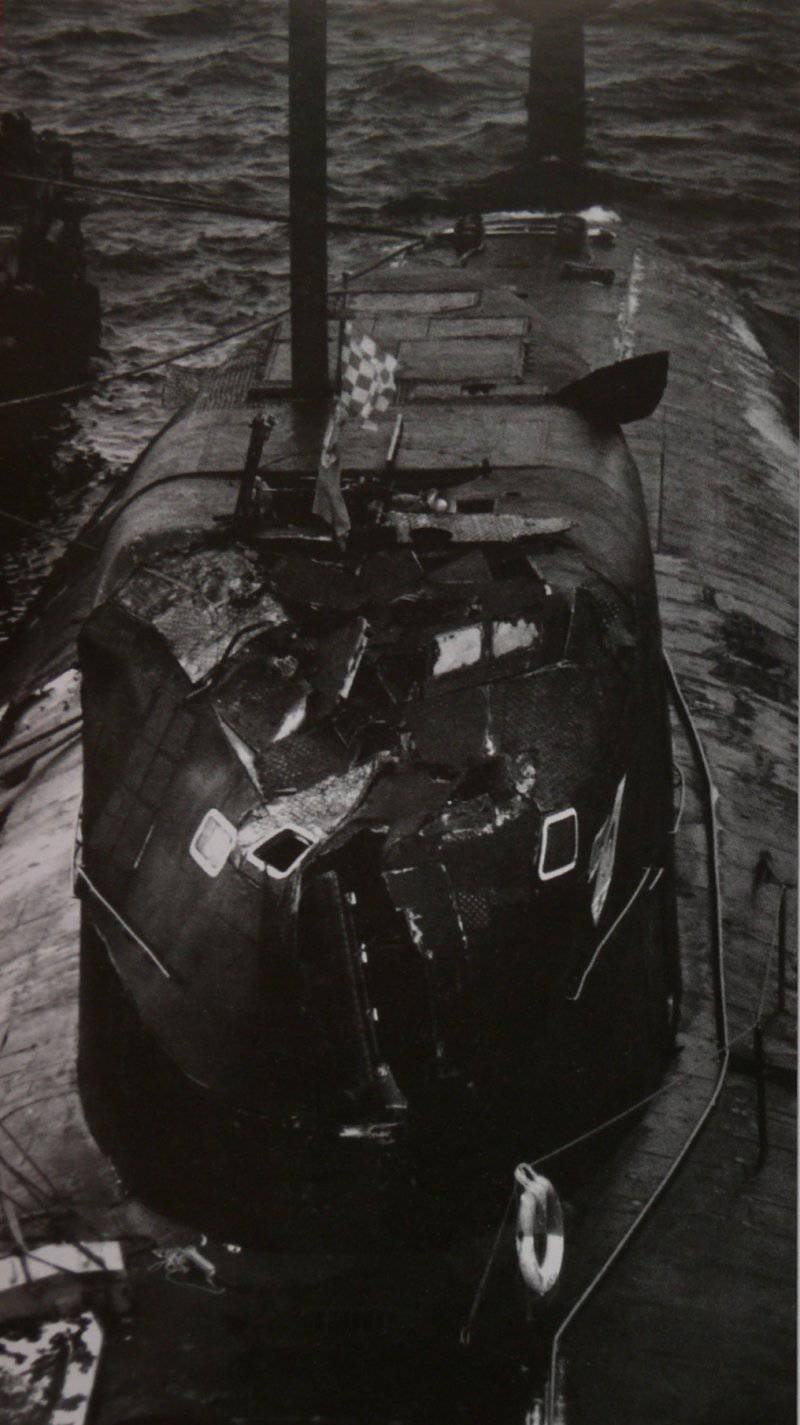 Damage to "Kostroma"
From surprise, both submarines jumped to the surface, a cold sweat came out at the American sailors - go “Kostroma” one meter higher, it would hit the “American” with its nasal tip. In all cases, the Russian submarine was to break through the titanic hull of the shaky side of the Baton Rouge, drowning the “likely enemy” right at the entrance to the Kola Bay.
However, the Russian submariners did not seduce such prospects at all - the strongest blow to the bow of the boat could lead to the detonation of the torpedoes' combat units, destroying both opponents.

The final of the tragicomedy is obvious: “Kostroma” healed its lacerated wounds and returned again to the fulfillment of the tasks set in the ocean. “Baton Rouge” independently reached the home base, but the resulting damage (first of all, microcracks and internal stresses in the hull made repair of the boat impractical. Baton Rouge stood in reserve for a couple of years until it was finally written off in 1995. Evil tongues say that at the time of the collision a fire broke out on board the Baton Rouge, perhaps there were human casualties.

The international conflict was settled quickly: the Americans said that at the time of the collision, the Baton Rouge was in neutral waters outside the 12-mile zone of the territorial waters of the Russian Federation. On this and agreed. And on the cabin of the nuclear-powered Kostroma, a five-pointed star appeared with the 1 number inscribed in it — this is how submariners scored their victories in the years of the Great Patriotic War. 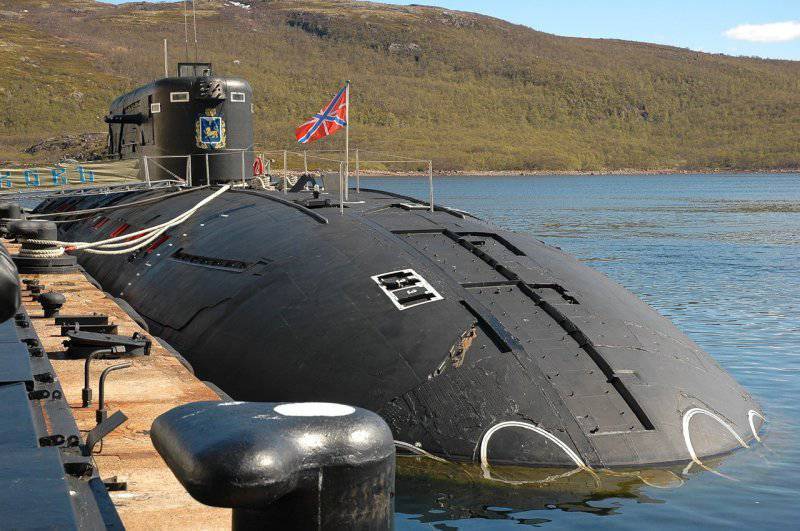 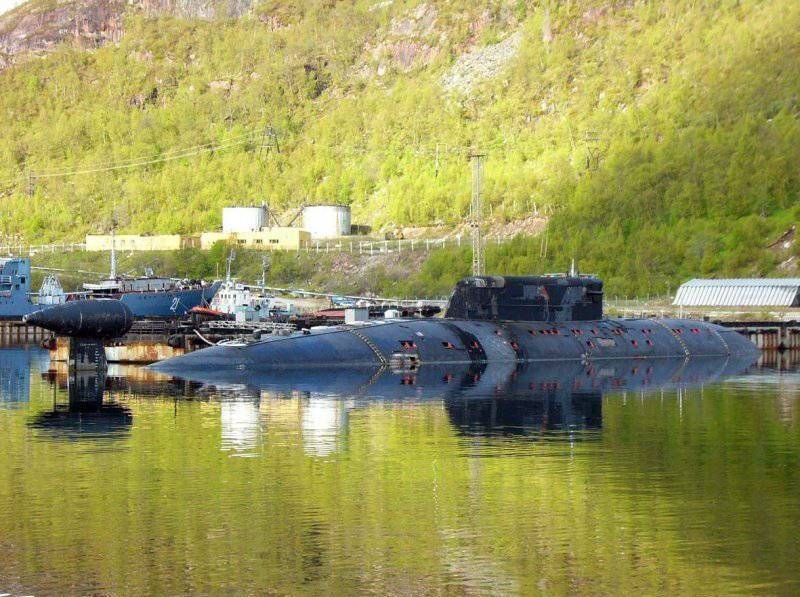 On the right board, the consequences of a fire in the SRH-82 dock are noticeable.

Multipurpose nuclear submarine B-336 "Pskov" (formerly K-336 "Perch") of the 945A "Condor" project (NATO Sierra-II)
It is intended for searching and tracking submarines and surface ships of a potential enemy, striking at sea targets.

The two-part design, the strong case is made of titanium, consists of 6 compartments;

* All the above data are valid for a non-modernized submarine 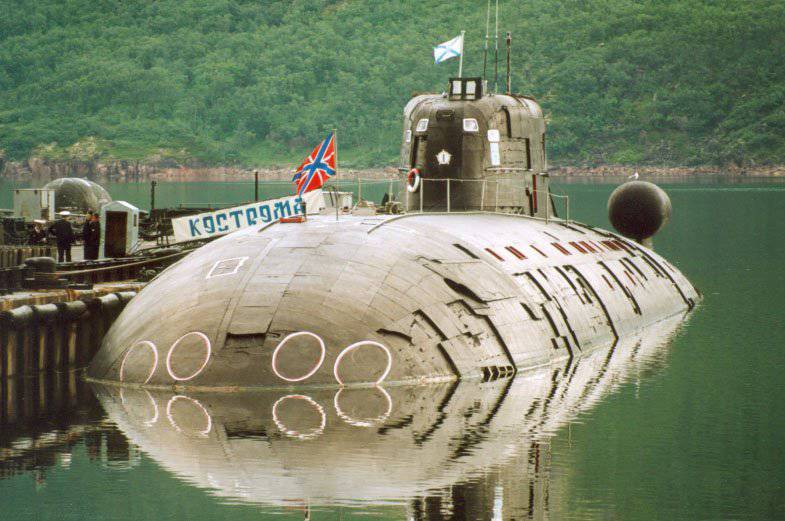 On the front of the cabin there is a star with the number "1". Account is open.

Ctrl Enter
Noticed a mistake Highlight text and press. Ctrl + Enter
We are
Nuclear submarines with cruise missiles. 661 projectGuards missile cruiser "Varyag"
144 comments
Information
Dear reader, to leave comments on the publication, you must to register.