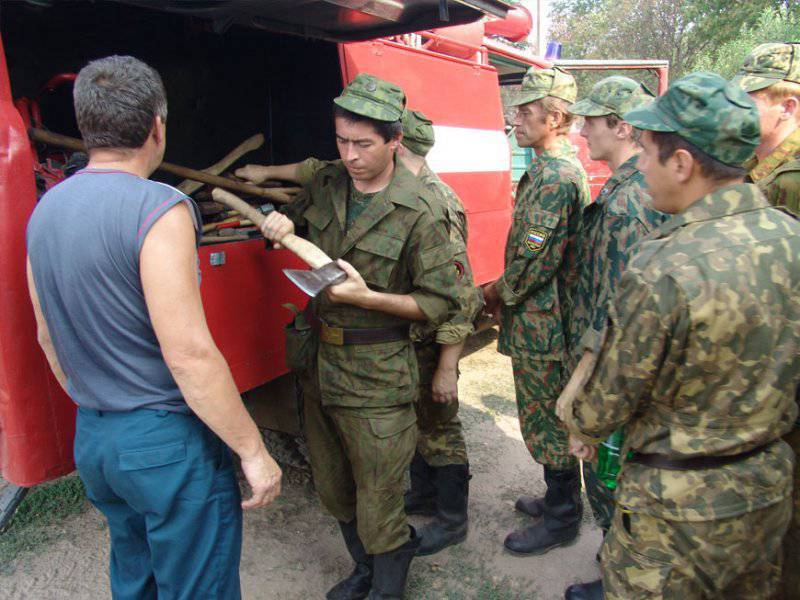 The Ministry of Defense has finally begun to modernize the reserve of its armed forces. After all, the reserve is the main source of the combat units redeployment in wartime, and also new units can be formed from the reserve during mobilization deployment.

Since Soviet times, the defense ministry has constantly had problems with maintaining a reserve in constant combat readiness. In rare training camps, current officers without tears could not look at reservists undergoing training. Complete and awkward guys who have long forgotten how to handle weaponspulling on his military uniform, they looked more like partisans than regular military personnel. These “partisans” during the course of their studies were a headache for their commanders, since they only cared where they could find alcohol and get the most out of their family worries. And everyone understood that this horde would hardly be able to recruit, if necessary, a warhead.

Not having established order with the recruitment of contract servicemen to the regular army, the General Staff was concerned with the introduction of a contract service in reserve. Until the bill came out of the depths of the defense department. The details of this initiative legislative act are not fully known. But in general terms, the algorithm is as follows: all soldiers who have served and officers will be asked to sign an agreement on service in the reserve. Contract reservists will be required several times a year to become a military system, leaving the family and work. For this constant readiness for military service, the reserve reservist is scheduled to pay a certain reward. This payment will not depend on the earnings of a reservist in a civilian place of work. But if there is a payment for the service, then it will be possible to ask from the vault in full: for the “beer” tummy and poor physical fitness, for not knowing the material part of the weaponry and the lack of skills in owning modern weapons, etc. The General Staff plans to introduce the institute of contract soldiers in reserve by the year 2016. But this can happen only after the necessary legislative framework has been prepared and adopted to ensure the implementation of the General Staff project.

According to military experts, the idea of ​​turning the "partisans" into a really trained mobilization reserve is very attractive. In this case, the reserve will not consist of officers and soldiers of the reserve, who have long lost all military skills, but of trained specialists for manning combat units. Now the number of Russian armed forces is approximately one million people. In wartime, it is necessary to increase the staff by about a third. The trained reservists will be the source for completing the combat units. According to approximate calculations, reserve contract servicemen should be at least 300 thousand.

According to the project developers, it will be possible to attract smart, healthy, educated specialists who can cope with sophisticated equipment, weapon systems and electronic complexes to conclude a contract.

According to forecasts, contract servicemen will be paid from 8 to 10 to thousand rubles for being in reserve. For a young man who receives a salary at the main place of work, such additional earnings will not be superfluous. Recently, the military department offered contract employees the same wage. But the contractors had no right to have other sources of income. Partly because of low pay, the army’s transition to a contract-based program failed.

Head of the General Staff V.Glotov believes that the formation of reservists may begin this year. According to him, volunteers who agree to conclude a contract with the Ministry of Defense will be involved in the recruitment of military units in their military accounting profession, as well as undertake to participate in the training camp and undergo military training. The financing scheme for such a service includes the payment of a monthly salary taking into account district coefficients and interest for the length of time in the reserve. Additionally, the reserve will be paid a lump sum at the conclusion of a new contract.

But before this project is launched in the armed forces, military officials plan to “run in” it in the motorized rifle units of the Land Force in two stages.

At the first stage no more than 5 thousand reservists will be attracted by contract, and at the second their number will be reached by 8600 people.

By the end of 2013, the plans of the General Staff to form a brigade of professional reservists, and within a year and a half, the Russian army will be replenished with two similar units. Established "guerrillas" will be involved by the defense ministry not only during a military threat and in training exercises, but also during the elimination of natural disasters.

Note that the transfer of the "partisan" to a contractual basis received legislative support in the form of a federal law, which entered into force on January 2013. This legislative act sets forth a general procedure for creating a “second front” for Russian law enforcement agencies. But the details of this project are still under consideration by the Minister of Defense.

The initiators of the bill on reservists themselves do not fully know all the pitfalls that may appear in the process of project implementation. For example, frequent and possibly unexpected employee absences clearly do not like employers. And the loss of work cannot be compensated for such a small amount as payment for being in reserve. Restricting travel abroad will also become a mandatory procedure for a reservist. Adventure can be called the idea of ​​attracting foreigners to reservists. Paying for a service does not tempt them, and Russian citizenship is unlikely to deceive them. Only in an inflamed brain can one imagine a situation in which some John Rambo will join the Russian army (he alone will be able to replace the work of the sabotage detachment in the rear of the enemy). An opinion is being created that the officers of the General Staff have too simplified a solution for themselves, a task that is really topical for the defense of the country. And by this they can destroy a good idea for reforming the mobilization resource.

Time will tell how much the Russian military think tank has developed a real strategy - the General Staff for solving the issue of creating a professional and combat-ready reserve.

Ctrl Enter
Noticed a mistake Highlight text and press. Ctrl + Enter
We are
On the launch of the new training system for reservists in Russia"Contract" does not threaten us?
49 comments
Ad