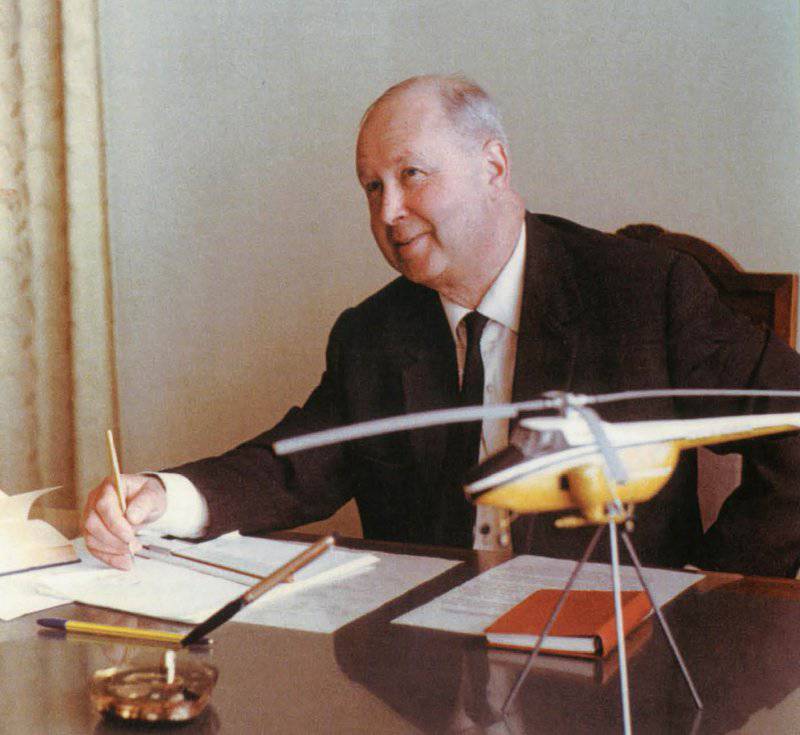 Mikhail Leontyevich Mil was born on November 22, 1909 in Irkutsk in a family of intellectuals. His father, Leonty Samoilovich, was a railway employee, and his mother, Maria Efimovna, was a dentist. The future designer was interested in childhood aviation, built model airplanes and after graduating from high school in 1926 he entered the Siberian Technological Institute in Tomsk. There he was enthusiastically engaged in a glider circle. However, the Siberian Institute did not train aviation engineers, so two years later Miles transferred to the third year of the mechanical faculty of the Don Polytechnic Institute, where he had aviation specialization. In 1929, he married his classmate P.G. Rudenko, they had five children - four daughters and a son.

While still a student, ML Mil was interested in rotary-wing aircraft and during the summer internship in the summer of 1929, he participated in the construction of the first Soviet autogyro KASKR in the aviation section of the Central Council of Osoaviakhim.

After graduating from the institute in 1931, a young engineer went to work in the Section of Special Structures (JCS) of the Experimental-Aerodynamic Department of TsAGI, where he soon showed himself as a promising specialist, and after a year, in January 1933, when he converted the JUICE into the Department of Special designs led a team of aerodynamic calculations and experimental studies. At the same time, he published his first printed works describing the winged autogyro TsAGI 2-EA and TsAGI A-4, in the design and testing of which he was directly involved. The subsequent publications of Mile were devoted to the problems of aerodynamics and flight dynamics, aeroelasticity and strength of rotary-wing machines. Under the leadership of ML Mil, a general theory of the rotor was created, which is used in the calculation of various cases of flow. By the beginning of the 40's. Mikhail Leontievich became one of the leading domestic specialists in the theory of autogyros and helicopters.

ML Mil continued to be engaged in TsAGI and design work. He took an active part in the design and testing of winged autogyros TsAGI A-6, A-7 and A-8, designed blades and other units. When in the middle of the 30-ies it became apparent the need to move from winged to wingless autogyros with direct control of the rotor hub, Mil conducted extensive theoretical studies of various versions of such gyros and the effect of changes in the basic parameters on their flight properties. The results of his theoretical studies were tested on autogyros - flying laboratories A-8 and A-14 and in 1936-1937. embodied in the TsAGI A-12 record autogyro and the A-15 scout-spotter. created together with N.K. Skrzhinsky and V.A. Kuznetsov.

Simultaneously, Mile began to study the features of a fundamentally new type of autogyro, with the so-called “jumping” take-off. In 1940, he was appointed Deputy Chief Designer at the Screw Aircraft Plant No. XXUMX, which was established near Moscow near Ukhtomskaya Station, where, under the leadership of N.I. Kamov, he participated in the serial production of A-290-AHT gyros and created an experienced AK jumping-autogyro. .

At the beginning of World War II, ML Mil was seconded as an engineer to an experienced squadron of autogyros, spotters A-7-3. took part in the Smolensk defensive battle. The experience of operating rotary-wing vehicles, acquired directly under combat conditions, was useful to the designer in the future when designing helicopters. However, the squadron was soon disbanded, and plant No. 290 was evacuated to the Urals and closed in 1943. Being in evacuation in Bilimbay, Mile was engaged in the improvement of armament of A-7-ZA autogyros.

In 1942, Mil had the idea of ​​creating an anti-tank gun. Mikhail Leontievich independently conducted the development and testing of a rifle that fired rockets.

In 1943, Mr. Mikhail Leontyevich returned to TsAGI. But all the work on the rotary-winged subject at the institute had been curtailed by this time, and Mile continued his research on the stability and controllability of the aircraft, which he had begun before the war, which served as the basis for his Ph.D. thesis. The defense took place in 1943. The innovations developed by him in the design of the Il-2 and Il-4 aircraft control systems have significantly improved the piloting characteristics of these main Soviet aircraft combat vehicles. For his contribution to the development of aviation technology during the war years, ML Mil was awarded the Orders of the Patriotic War of the II degree and the Red Star.

In 1945, ML. Mile successfully defended his doctoral thesis. The rotor dynamics with hinged blades and its application to the problems of stability and controllability of the gyro and helicopter. 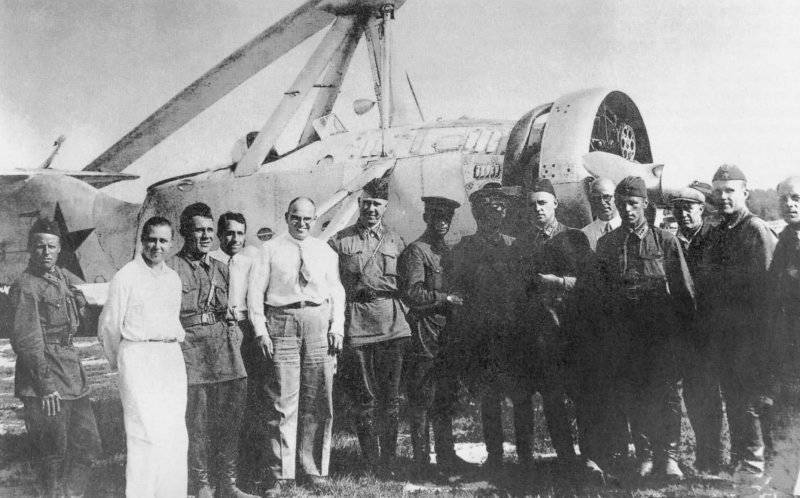 M.L. Mil, V.A. Kuznetsov (fourth from left) and N.I. Kamov among the military before sending A-7 to the front

Dealing with the underlying problems of aircraft manufacturing. ML Mil never ceased to be interested in the actual tasks of the development of rotary-wing aircraft. At his insistence in TsAGI in 1947, a heli-gunter laboratory was created, and then a helicopter design bureau was set up, headed by Mikhail Leontievich.

The OKB first moved from TsAGI to Aviation Plant No.82 in Tushino, and several years later, in the fall of 1951, it was transferred to the oldest specialized helicopter plant GSOZ No.3 in Sokolniki in our country on 2 st Rybinskaya Street. Since that time, all the creative activities of ML Mil took place on his territory. Under his direct supervision, the small plant became the world leader in the development of rotary-wing technology. Miles was the permanent leader of this institution, which from 1953 was named State Union Plant (GSOZ) No. 329, and from 1967 the Moscow Helicopter Plant. After the death of ML Mil, the plant received his name.