March 27 2013
3
The tank is the main striking force of the ground forces, so their loss is painful for any army in the world. Main combat Tanks too expensive a form of equipment to destroy damaged cars or throw them on the battlefield. Understanding this, special vehicles were created for the evacuation of this type of military equipment - BREM (armored repair and recovery vehicle). Modern ARVs are designed to evacuate damaged and stuck tanks, infantry fighting vehicles, armored personnel carriers, self-propelled guns and other pieces of equipment, including under fire from a likely enemy. In addition, the BREM is able to carry out the necessary maintenance and repair of equipment in the field.


Today, armored repair and recovery vehicles play an important enough role in the combat use of mechanized units and possess the necessary set of additional equipment. Often this kind of machine is equipped with a lifting device, traction winches, welding equipment, etc. For self-defense they are usually installed large-caliber or conventional machine guns. The top of the evolution of BREM today are machines built on the basis of MBT.

The American army still relies on its modernized veteran BREM M88A2 HERCULES to perform the most complex and difficult work. HERCULES stands for Heavy Equipment Recovery Combat Utility Lift and Evacuation System - a system for evacuating and repairing heavy general-purpose military equipment. This machine was developed by Bowen-McLaughlin-York (BMY) at the end of the 1950-s. In consequence, this company was acquired by the British corporation BAE Systems. In 1977, the M88A1 upgrade was born, and the M88A2 version began to be developed in the 1991 year.

All of them are based on the original version of the machine, built on the basis of tanks M48 and M60 PATTON. On the M88A2 HERCULES version, the winch power was increased by 55%, and the lifting capacity was increased by 40%. At the same time, the crew of the car managed to be reduced from 4 to 3 people. Currently, the M88A2 tracked BREM is the only vehicle in the US Army that is able to independently evacuate the main American battle tank Abrams from the battlefield. 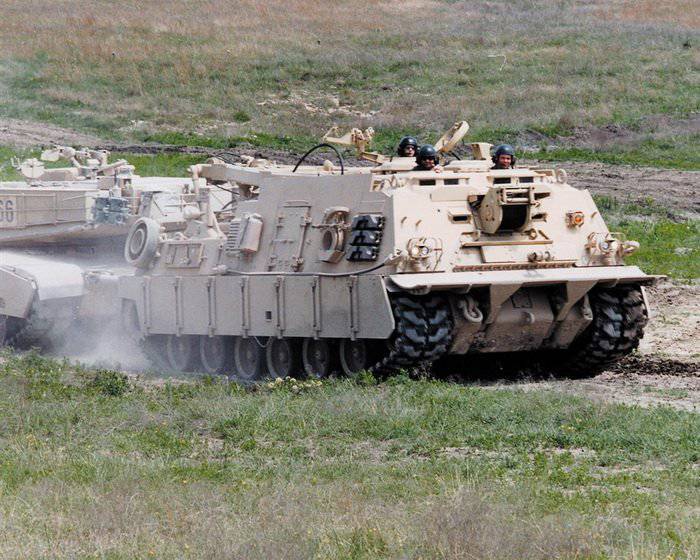 The total mass of the BREM is 63,5 tons. At the same time, the vehicle is equipped with an AVDS 1790-8CR hp 1050 diesel engine, which allows it to tow heavy military equipment weighing up to 70 tons, in particular tanks M1A1, M1A2 or Leopard, as well as other heavy combat vehicles, such as bridgehead. The maximum speed of the M88A2 is 40 km / h, the power reserve is 322 km.

At the moment, BAE Systems has received orders for a total of 1,4 billion from the US armed forces under the Hercules program. At 2011, the US Army transferred 394 BREM M88A2 HERCULES with a total need for 607 machines of this class. The US Marine Corps received 75 units of similar military equipment.

If we talk about champions in export, then we can talk about the Polish BREM WZT-3, which is based on the OBT PT-91, which in turn is an adaptation of the Soviet tank T-72М1, produced in Poland under a license. Currently, the main customer of the WZT-3 BREM is India, which 17 on January 2012 of the year entered into a contract with Poland for the supply of 204 repair and recovery vehicles of this class. The cost of this transaction amounted to 275 million. BREM WZT-3 will replenish almost 350 of similar machines, which India acquired from Poland under the contract from the 1999 year. All these vehicles are designed to serve the Indian fleet of T-72 and T-90 tanks. 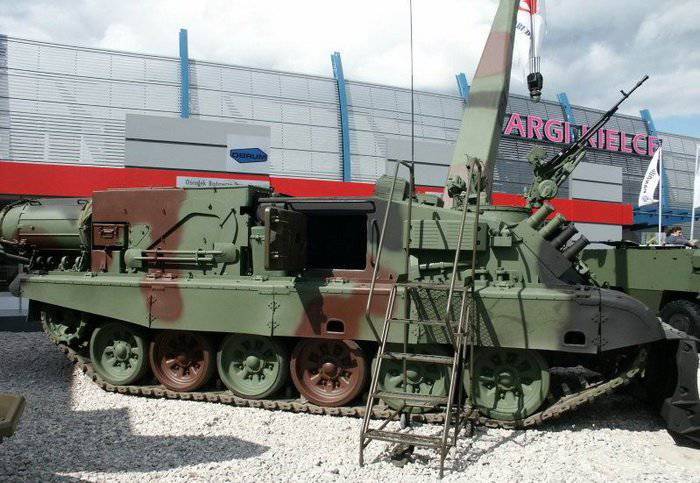 The conclusion of this transaction may indicate the deepening and expansion of the Indo-Polish military-industrial cooperation. This applies, among other things, to work on the creation of a new BREM based on the Indian tank ARJUN. If we talk about Poland, now this country represents on the market two heavy BREMs built on the basis of the tank PT-91 and PT-91M (WZT-3 and the newest WZT-4, respectively).

The WZT-4 BREM has a mass of 45 tons, the crew of the vehicle consists of 4 people. This repair and recovery vehicle represents a significant upgrade of the previous version. This BREM is controlled by the steering wheel, and the power of the power plant was brought to 1000 hp. The WZT-4 is equipped with an automatic transmission, which, in combination with a new powerful engine, allows the car to accelerate to 65 km / h when driving on a highway. To simplify operation, the faucet was installed on the opposite side of the exhaust manifold. The machine is equipped with a powerful hydraulic winch, which is able to generate 300 kN (30 t) traction with one cable, but with a chain hoist it can pull up to 90 tons with force (for comparison, the WZT-3 has a maximum pull force of 84 tons). The winch cable length is 200 meters. 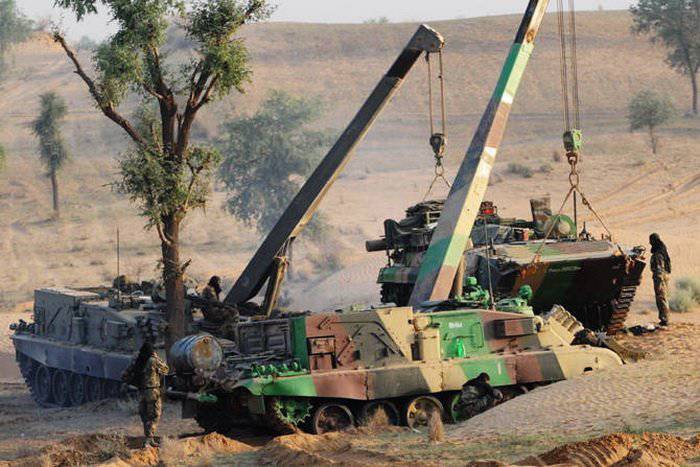 BRAM WZT-3 Indian Army
In addition, the machine is equipped with an auxiliary winch with a pulling force of 20 kN, as well as a cable with a length of 400 meters. The minimum boom of the crane is 5,8 meters, the maximum - 8 meters. The crane is able to lift tons of cargo up to 20 and can rotate 360 degrees. The last component of this BREM equipment was the dozer blade having a width of 3605 mm. Also, the machine is equipped with an auxiliary power unit with a capacity of 16,1 kW, which is used to operate the air conditioning system and generate electricity. In addition, the machine is equipped with: 2 radio transceiver, optical-electric and infrared sensors, GPS / inertial navigation system combinations, 12,7-mm heavy caliber machine gun, smoke grenades, a system for protection against WMD and a fire extinguishing system.

The German BREM BUFFALO, as you might guess, is built on the basis of the LEOPARD 2 main battle tank, which is very successful all over the world. BREM Bergepanzer 3 Büffel / Buffalo or BPz 3 according to the German classification was created by order of the armed forces of Germany and the Netherlands. This vehicle is designed to evacuate damaged and stuck tanks and other military equipment from the battlefield, as well as to perform all sorts of repair work in the field. Today, this BREM is in service with 8 states of the world.

The winch, hydraulic crane and dozer blade are included in the package BREM BUFFALO. Due to the onboard hydraulic crane, this BREM can easily replace the entire tower or engine compartment (MTO) on a Leopard 2 tank. Combined dozer blade mounted on this repair and recovery vehicle has blade stabilization. 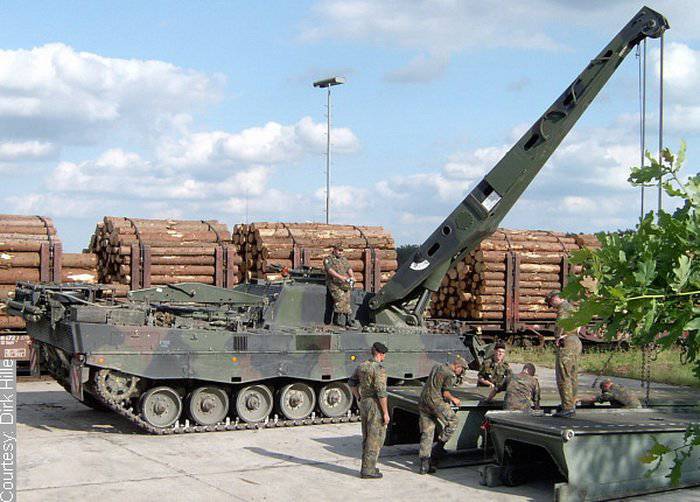 The mass of BREM BUFFALO is 54,3 tons. Thanks to the powerful 12 hp 1500 cylinder diesel engine. the car is able to accelerate to 68 km / h when driving on a highway, the range is about 400 km. The angle of the crane installed on the machine is 270 degrees, and its carrying capacity is 30 tons. The maximum force of the main winch is 700 kN by means of a roller, an auxiliary winch 6,5 kN. The maximum length of steel cables with a diameter of 33 and 7-mm, respectively, is 180 and 280 meters.

At present, the only combat vehicle based on the chassis of the Challenger-1 tank and remaining in service with the British army is the armored repair and recovery vehicle CARRV - Challenger Armored Repair and Recovery Vehicle. Starting in 1990, 74-like armored vehicles were supplied to the English units. This BREM with its engine, chassis, lower part of the body and a number of units and systems repeats the OBT Challenger-1.

The crew of this BREM are 3 man: a driver, commander and radio operator, in addition it is possible to transport another 2-man. On the roof of the car body mounted special commander's turret. The turret has a remote-controlled 7,62-mm machine gun, day (with 1- and 10-fold increase) and night (with 1- and 6 fold increase) sights, as well as 9 fixed observation devices. MTS is located in the aft part of the machines and is separated from the fighting compartment by a special fire wall. The BREM CARRV uses the same main and auxiliary engines as on the Challenger-1 tank. 12 is located in front of the hull, and smoke grenade launchers in the back of 8. Also, the machine has a system of protection from weapons mass destruction. 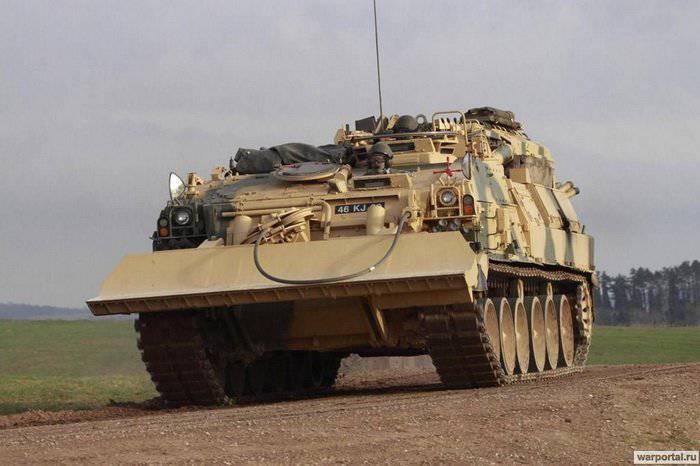 In addition, the repair and recovery vehicle is equipped with a dozer blade, which is installed in the front part of it. In addition to the transportation and replacement of power units MBT equipment installed on the BREM CARRV, allows you to perform welding work. The car has a set of spare parts and tools for repairing tanks in the field, as well as a powerful air compressor. This BREM is able to tow military equipment weighing up to 68 tons at speeds in 30 km / h.