March 30 2013
29
The hundreds of Soviet-supplied Mi-25 and Mi-35, successfully operated in many countries, are attractive targets for modernization.


At the air show at Le Bourget in 1999, the Tammam division of the Israeli aviation concern IAI demonstrated the upgrade option of the Mi-24 - “Mission 24”. Without making changes to the design of the airframe, the power plant and the carrier system, it was proposed to install modern navigation equipment, an onboard defense complex and a night vision system.

In the instrumentation equipment of the Mission 24 cabs, the “glass cabin” principle was implemented, and the “round-the-clock” was provided by the HMSOP multifunctional optoelectronic complex. The helmet-mounted display made it possible to direct the turret machine-gun installation by turning the head. The upgraded helicopter could use the Israeli NT-D "Dandy" ATGM with a range of 6 km, developed by Rafael. Compared to the Russian Mi-24BM, the e-filling of the “Mission 24” was more advanced, but the flight characteristics of the modified car turned out to be lower. With the help of the Israelis in 2001 - 2003. The Indian Air Force upgraded the 25 Mi-25 and Mi-35 helicopters.

The South African company ATE has advanced its version of the improvement of the Mi-25 and Mi-35. The carrier system, power plant and control system remained unchanged, changing sighting and navigation equipment. OPS with thermal and optoelectronic channels, developed by the South African firm "Kent-ron", provides round-the-clock combat use of the machine. It was also proposed to strengthen the armament: the YakB-12,7 machine gun was replaced with an 20-mm automatic cannon, and the Soviet ATGM was replaced with Ingwa and Mo-Kop missiles of South African production.

These proposals were implemented in 2000 on Algerian Air Force 40 helicopters, known as the “Super Hind” (NATO intelligence services refer to the Mi-24 as “Hind”).

The South African company Advanced Technologies and Engineering (ATE) is another company outside Russia, leading its own successful Mi-24 modernization program. The 40 Algerian Mi-24 revision order was placed on 1999 and the first upgraded Twenty-Four, known under the Super Hind brand, were delivered to the customer several months later.

By 2004, the helicopters modernized by South Africans had already flown 14000 hours. Satisfied with the work of the Algerian Air Force in 2002, they proposed to ATE to develop a proposal for further modernization of the machines.

The nose section with the cockpit has a new configuration and new avionics. The design of the cockpit provides a better field of view than the Mi-24, shifts the centering of the helicopter back, increases maneuverability and facilitates flying at extremely low altitudes with flying obstacles.

Machine weight reduced by 2 tons. The cabin is protected by Kevlar armor. The on-board equipment is replaced with a new one with a smaller mass and is adapted for night-vision goggles. Two multi-functional displays (6х8 inches), a display with a digital map of the area, monochrome multifunctional indicators of the control and flight information display system, a new Doppler navigation system coupled to the global satellite navigation system GPS, radio navigation equipment, an improved human-machine interface ", a new software system for helicopter navigation, the control system of the onboard systems of the helicopter. 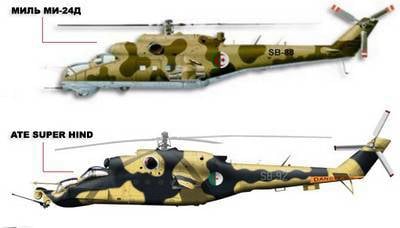 The helicopter is equipped with a Denel compact Argos-410 gyro-stabilized sight, coupled with a daytime telescopic sight, a front-view thermal imaging system, a laser target designator and a Ingwe guided missile generator with a laser beam guidance system.

Super Hind has a compact turret with a 20 mm aviation gun, programmable automatic reset of IR traps and dipole reflectors.

The armament control system of the updated Mi-24 received the FLIR multichannel aiming complex with an integrated laser rangefinder and automatic target tracking, the helmet-assisted HSS aiming system and the helmet-mounted aiming and displaying information system HMSD. The range of applied weapons. Now Mi-24 can use not only NAR C-5 and C-8 of domestic production, but also NAR of NATO standards, Ingwe and Mokopa guided anti-tank missiles developed in South Africa and having a maximum firing range of 5000 and 10000 m, respectively. 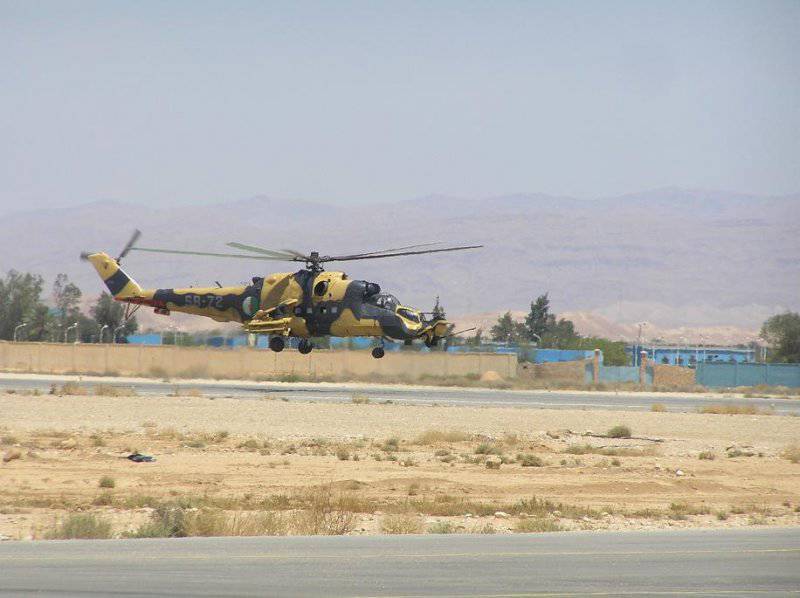 In the nose of the helicopter, South African engineers installed an installation with an 20-mm automatic gun with high speeds and pointing angles horizontally and vertically. According to ATE representatives, the weapon control system installed on the Mi-24 is also adapted to be installed on Mi-24P helicopters with an 30-mm automatic cannon. However, according to representatives of the ATE and Rostvertol companies, the modernization of the Mi-24 conducted in South Africa, at least in part, was coordinated with the Russian developers.

The new equipment of the helicopter is optimized for the use of night-vision goggles, which allows you to perform combat missions at night as well as in adverse weather conditions. In the cockpit there are two multifunctional color displays, which display a map of the area and flight information.

The range of the upgraded helicopter is about 230 km, and the maximum speed exceeds 300 km / h. ATE offers helicopter upgrading services for all operators of Mi-24, Mi-25 and Mi-35 helicopters.

The core of the avionics systems used in all Super Hinds was borrowed from the Denel Rooivalk attack helicopter. The complex includes an on-board computer developed by ATE, a navigation system, a cockpit adapted for the use of night vision goggles, and a Kentron Culumus Argos 550 gyro-stabilized multisensory viewing system with TV and infrared sensors and a laser rangefinder.

Option Mk III in addition has several high-tech innovations. Among them: Kentron helmet-mounted archer R2, allowing the pilot to control both the sight and sight system and the 20-mm cannon with 840 rounds of ammunition.

The most important element of the Mk III modernization package is the Ingwe ATGM. Eight of these missiles can be placed on the two underwing launchers. In addition, the helicopter is capable of carrying a large amount of weapons of Russian and South African production, including the NAR and free-fall bombs. During the tests, Ingwe ATGMs produced over 400 control launches and 90% of the missiles fired successfully hit the target. In addition, during the tests of the helicopter, about 100000 shells were fired from a F2 cannon.

At the International Exhibition of Aviation and Military Equipment Afriken Aerospace and Defense-2006 "(AAD-2006), held at the South African Air Force Base in Isterplat (near Cape Town), the South African company Ed-Vansd Technologies and Engineering (ATE) reported that the program of deep modernization of the Russian military helicopter Mi-24. At the exhibition, she presented for the first time a model of the nose of the fuselage with the cockpit of the new helicopter, dubbed the "Super Hind" Mk.5. From the original Mi-24 helicopter, the nose of the fuselage is new A look resembling the shape of the bow of the American Bell Helicopter AH-1 Hugh Cobra. Under the nose of the fuselage there is a turret for placing an 20-mm cannon or machine gun.

The crew cabin is equipped with two color multifunction displays (152 x 203 mm screen size), a display with a moving terrain map, a monochrome display giving information on the state of the onboard systems and failures, and other means forming the information and control field of the cabin. There is also a satellite navigation system GPS and internal diagnostic system. The weapon system includes a Denel Argos 410 gyro-stabilized sight, consisting of a day-time camera, a heat finder, and a laser range finder target indicator. This scope allows you to use an ATGM Denel "Yngve" with laser-guided.

Representing the upgraded helicopter, ATE claims that it was able to optimize for flying near the ground in following the terrain, which the original Mi-24 helicopter could not perform. She also reported that she had begun refitting one helicopter.

At the exhibition, ATE representatives reported that the design of the Super Hind MK.5 helicopter would be lighter on the 1800 - 2000 kg compared to the design of the Mi-24 serial helicopter. This will be achieved through the use of modern equipment and improved armor from "Kevlar". For example, instead of the old Soviet Doppler navigation radar with a mass of 210 - 250 kg, a station with a mass of just 4 kg is installed.

ATE announced that the Super Hind helicopter MK.5 will have a combat radius of 235 km (including 20-min fuel reserve), while carrying eight Ingwe, 18 PC and 400 shells to the gun. Cruising speed helicopter 220 km / h. The company also informed that the Russian Open Society "OKB im. M. L. Mil" supports the work on the modernization of the Mi-24 helicopter.

During the period of 2003-2005, ATE actively promoted the Super Hind project among the new members of NATO in Eastern Europe, but did not succeed. The only exception was the contract for the delivery of one demonstration sample to Bulgaria. The car, modified by the French branch of ATE and the Bulgarian companies TEREM and Liconex, is generally similar to the Super Hind Mk III. The helicopter underwent extensive testing in February and March 2005.

ATE Chairman of the Board of Directors Jean-Marc Pizaro (Jean-Marc Pizaro) emphasized the fact that this decision significantly reduced the weight of the helicopter, which in turn made it possible to accommodate additional booking elements. The lightweight helicopter, in addition, was able to significantly improve maneuverability. The combat radius of the new machine with a set of weapons from the 8 ATGM is 235 km. While the ATE management is not in a hurry to disclose possible customers of the new version of modernization.

During the period of 2003-2005, ATE actively promoted the Super Hind project among the new members of NATO in Eastern Europe, but did not succeed. The only exception was the contract for the delivery of one demonstration sample to Bulgaria. The car, modified by the French branch of ATE and the Bulgarian companies TEREM and Liconex, is generally similar to the Super Hind Mk III. The helicopter underwent extensive testing in February and March 2005.

Azerbaijan plans to upgrade its Mi-24 helicopters at the Konotop Aviakon Aircraft Repair Plant with the participation of a company from South Africa. About this ARMS-TASS reported a source in the Ukrainian defense industry.

In all likelihood, the contractor for the modernization work will be the South African firm Advance Technologies and Engineering (ATE), which presented the modernized Mi-2006 helicopter at African Aerospace and Defense (AAD) at 24.

The Ministry of Defense of Ukraine is also expected to consider the possibility of cooperation with South Africa to modernize its Mi-24 helicopters, taking into account the experience of Aviakon. Previously, negotiations on the modernization of the Ukrainian Mi-24 were conducted with the French company Sazhem, but they are currently suspended. At the same time, options for cooperation with France and South Africa are comparable in their main indicators. 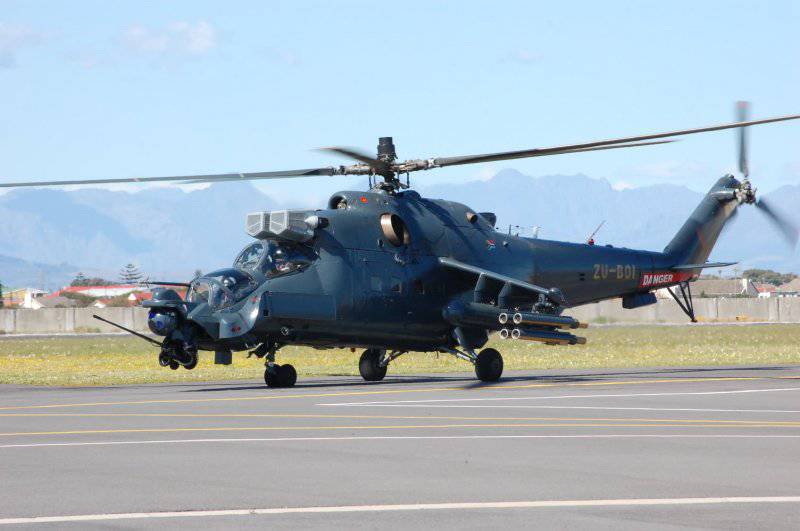 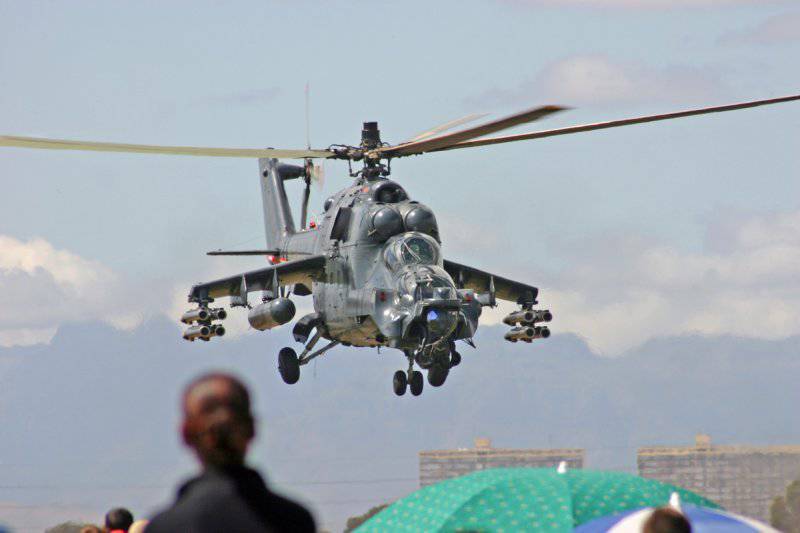 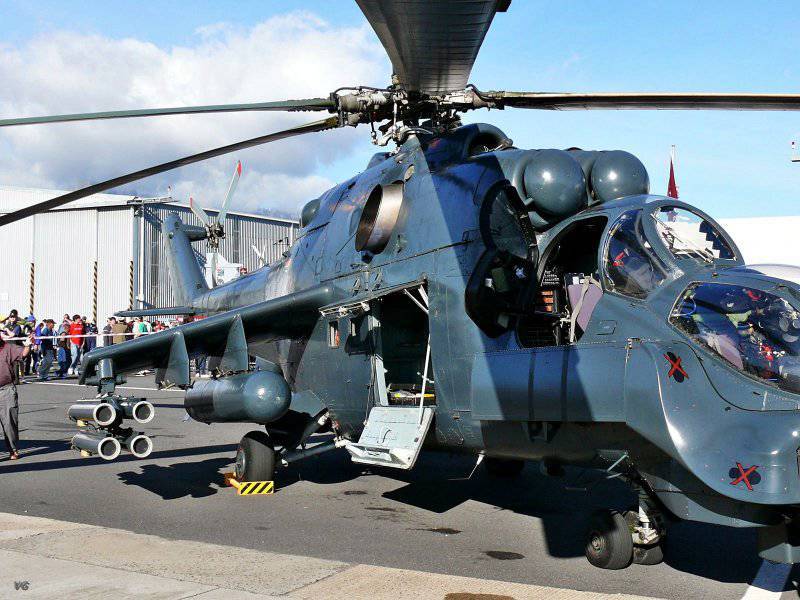 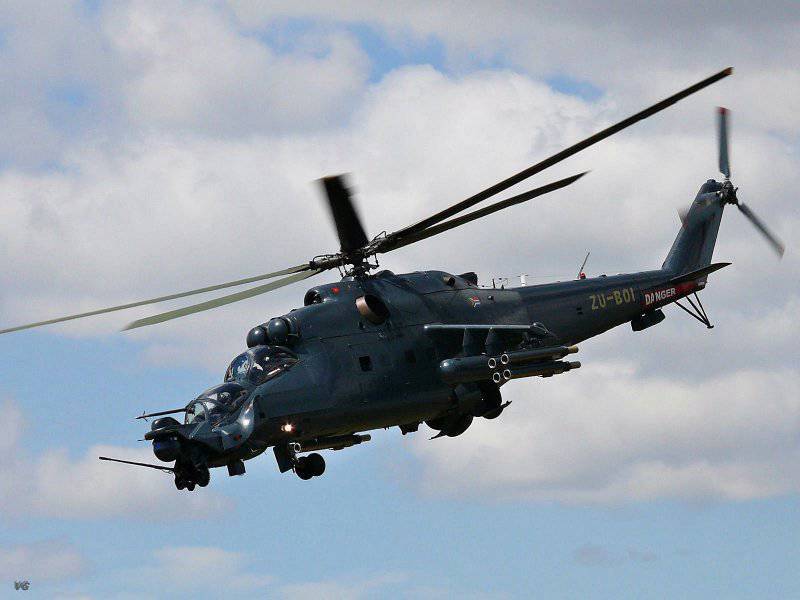 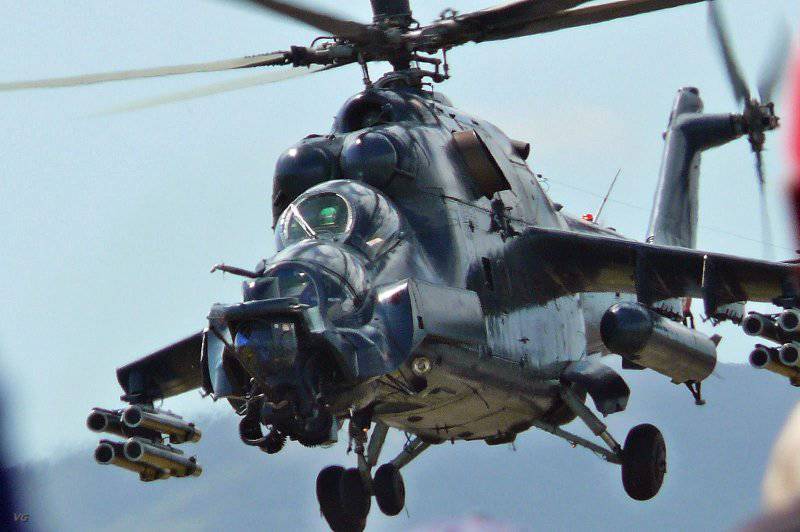 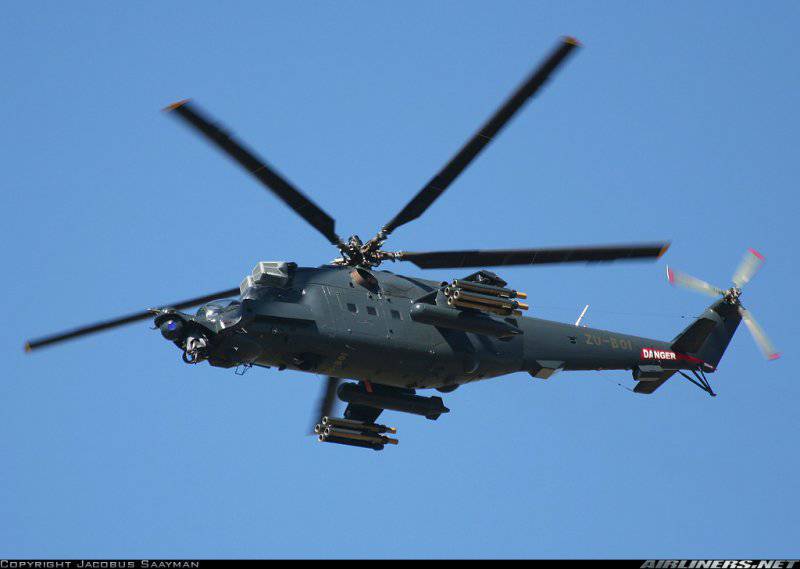 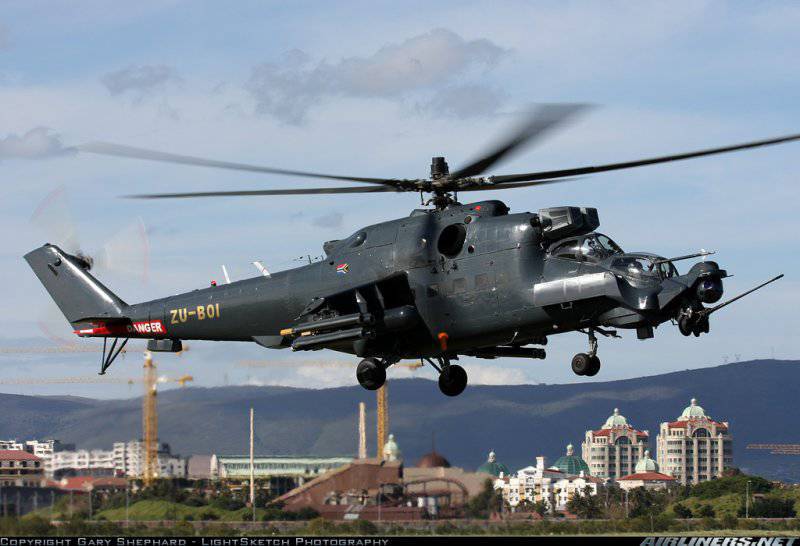 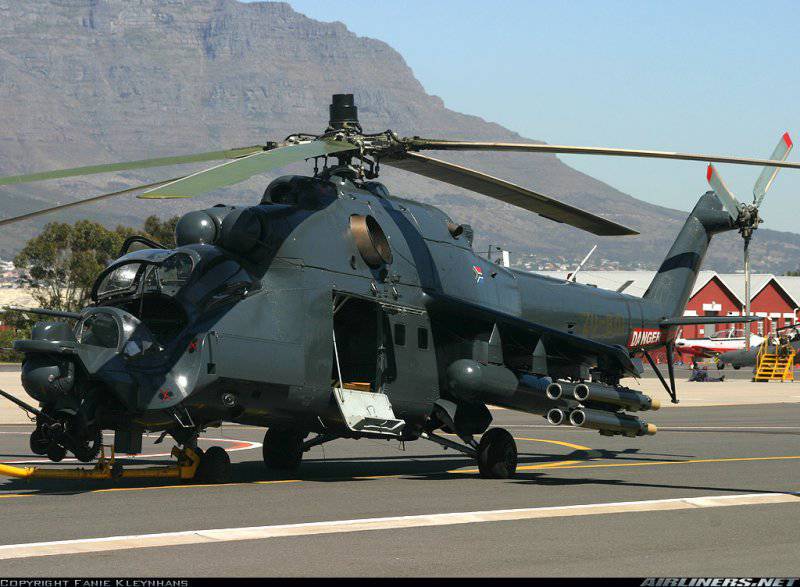 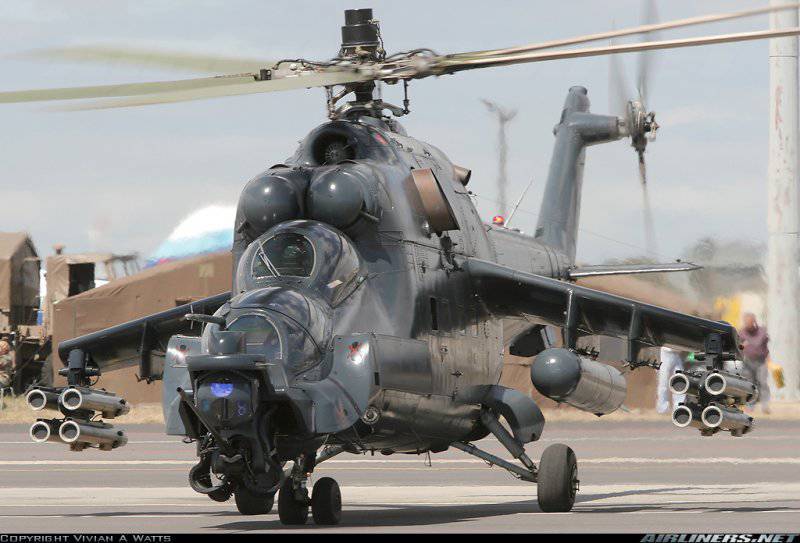 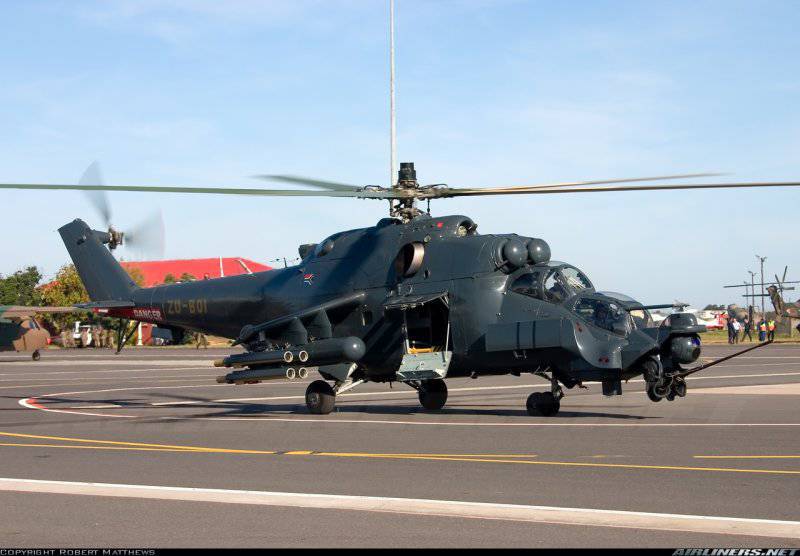 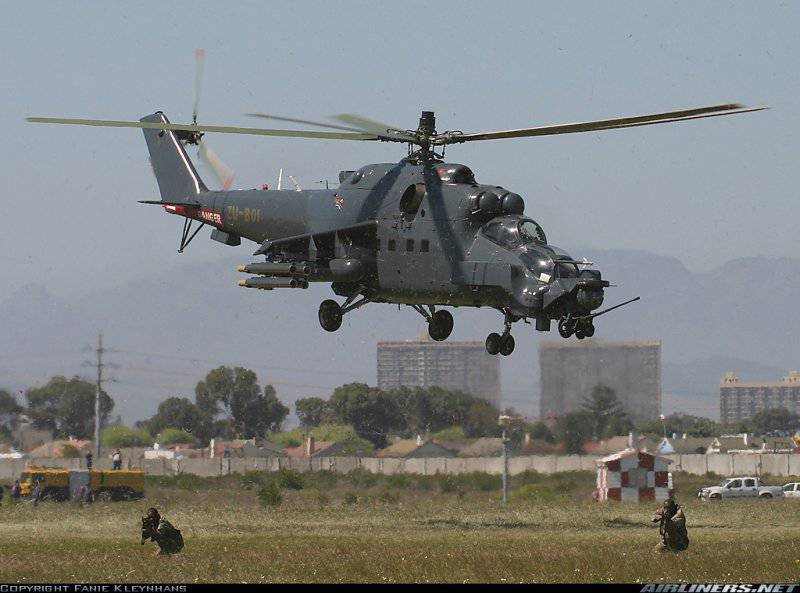 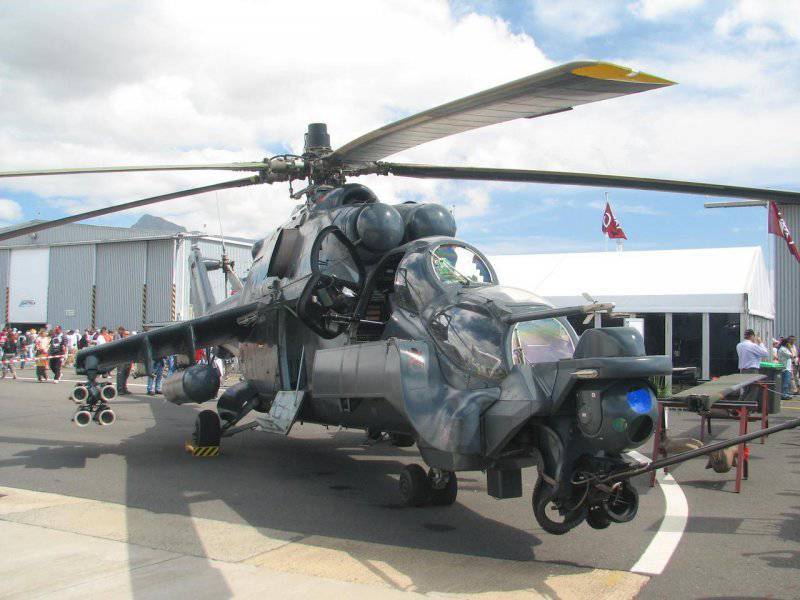 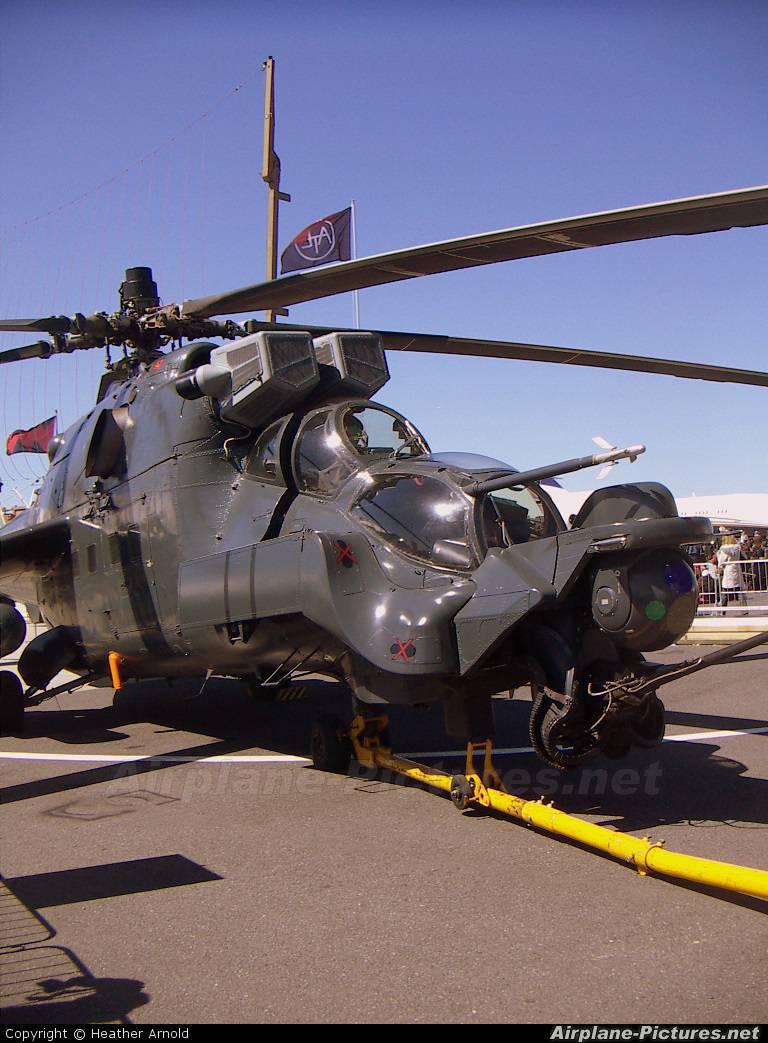 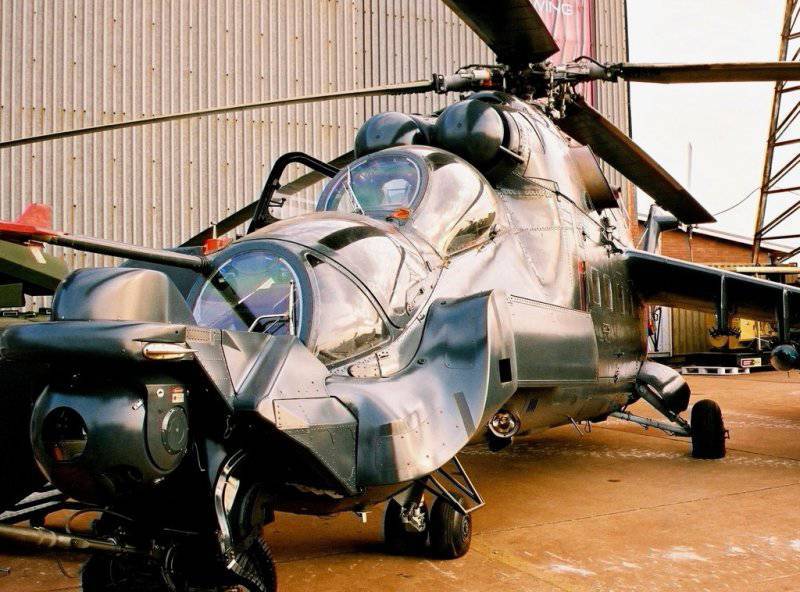 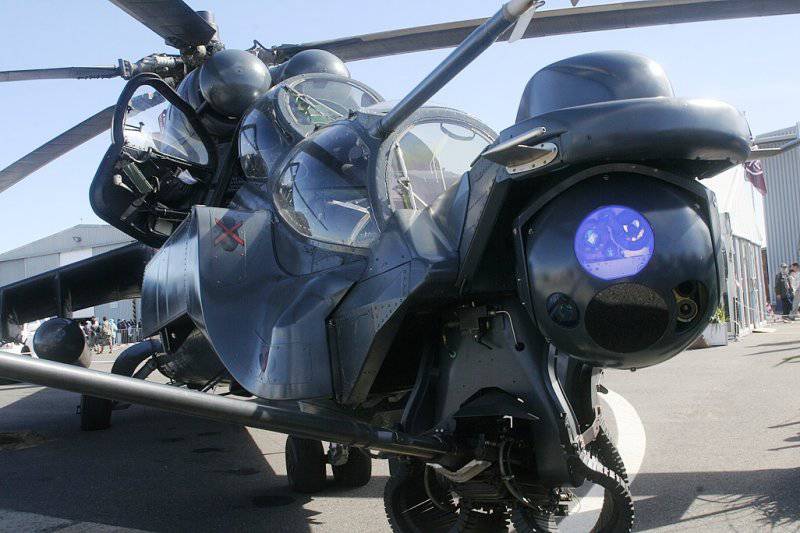 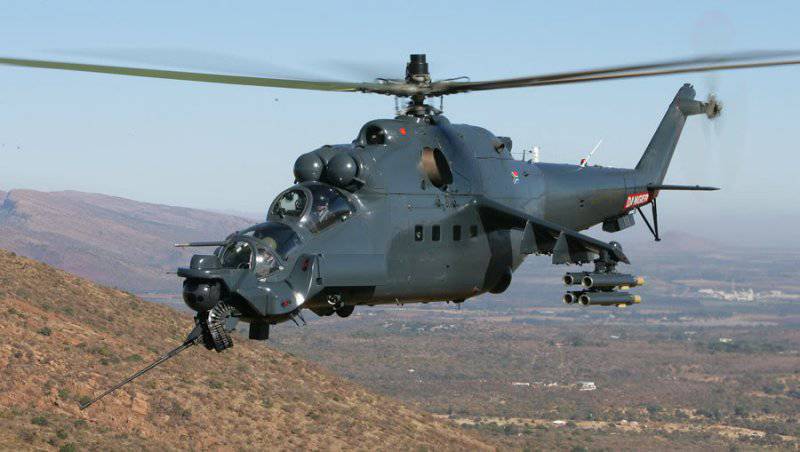