40 years to the legendary Mi-24 combat helicopter (part of 6). Modifications of P, K and VM


To conduct reconnaissance in the contaminated area at the end of 1978, the Mi-24В was modified in the Mi-24Р (product 2462) with two additional places for the radio operator and the technician. The 9K113 complex and the pivots were dismantled from the helicopter. The TSA-17B sight was replaced (1KB. A container with special equipment was installed at the first suspension point. Two racks with analysis and transmission equipment for radiation-chemical and biological reconnaissance appeared in the cargo compartment, the air-conditioning system was replaced with a life support system, the machine was equipped with air sampling equipment and of soil, including remote-controlled excavators on the wing tips, with LNG soil samplers, mounted on the tail support of the CXT unit with ten signal rockets. С XN The 1983 of these machines was used to eliminate the UMX in 1989.The Mi-110P was used in the aftermath of the accident at the Chernobyl nuclear power plant.In 24, the helicopter was equipped with modern communications and information processing equipment, eliminating the Mi-1989PA from the crew. 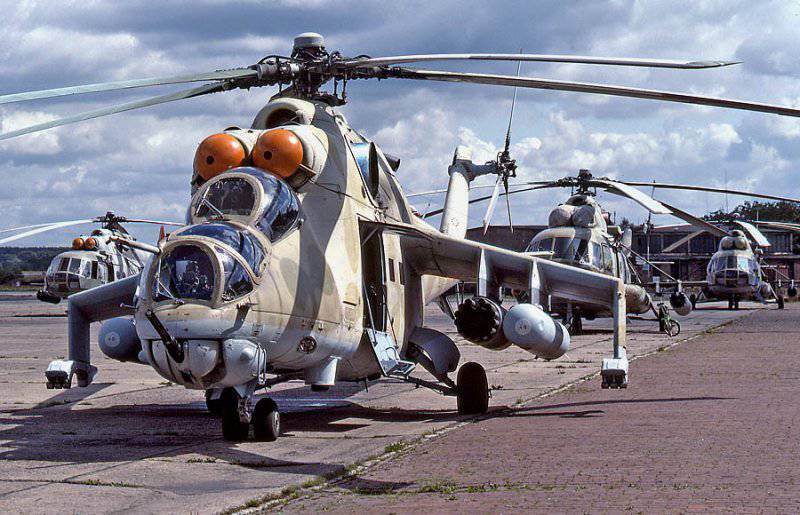 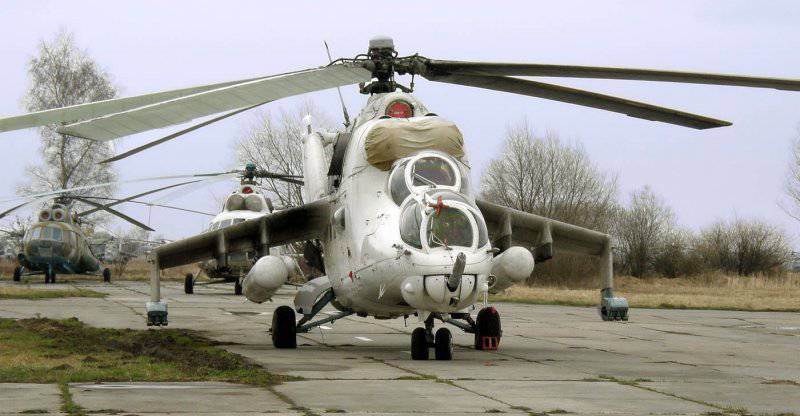 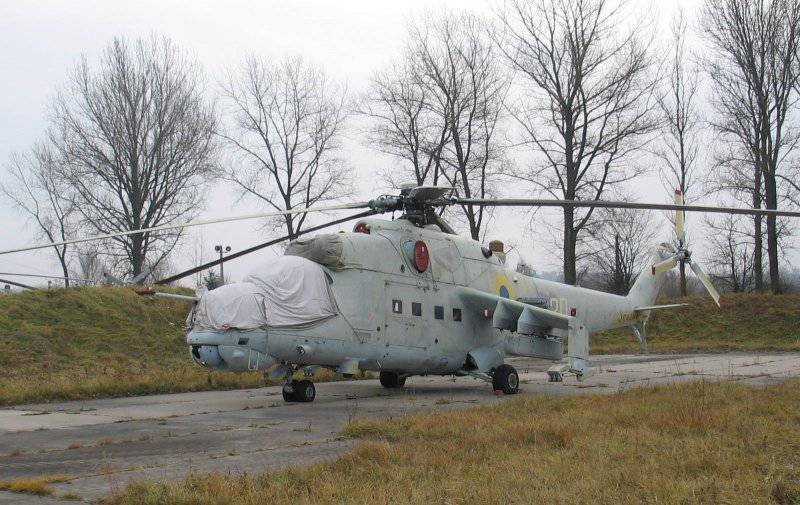 To correct artillery shooting and photo reconnaissance in 1979, the Mi-24K was built (product 201). Instead of "Rainbow", he received the Iris surveillance system with an increased sector of the review. In his cargo cabin, an onboard reconnaissance and correction complex “Ruta” was installed, consisting of an optical observation device, an onboard computer and an information conversion device, as well as an AFA-100 camera for shooting through a special window on the right side of the fuselage. The complex was controlled by the operator from his cabin. From 1983 to 1989, the 92 spotter was built. 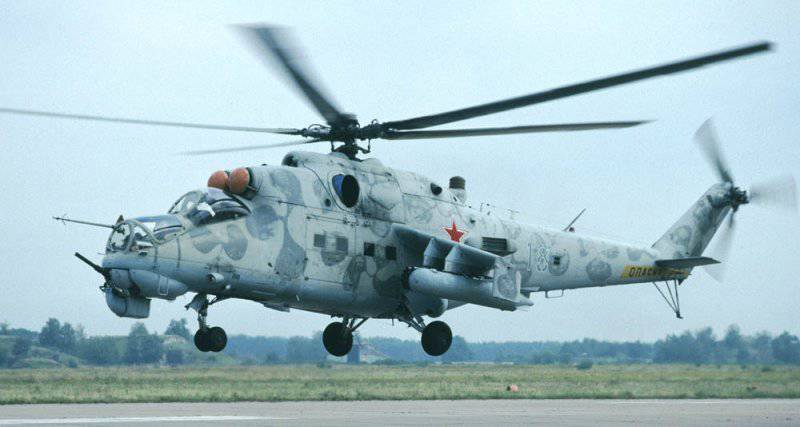 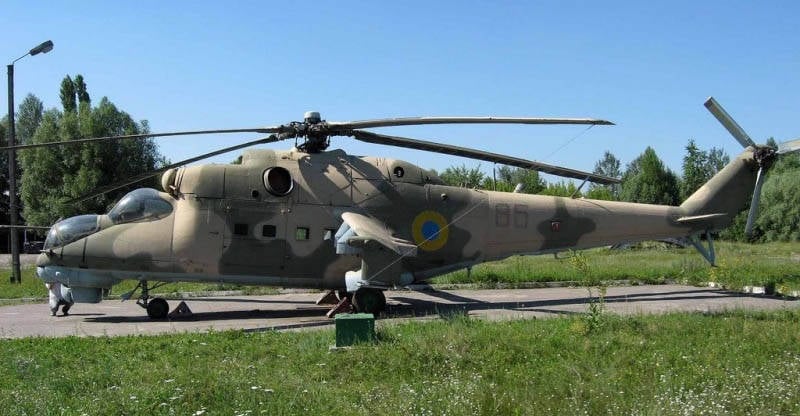 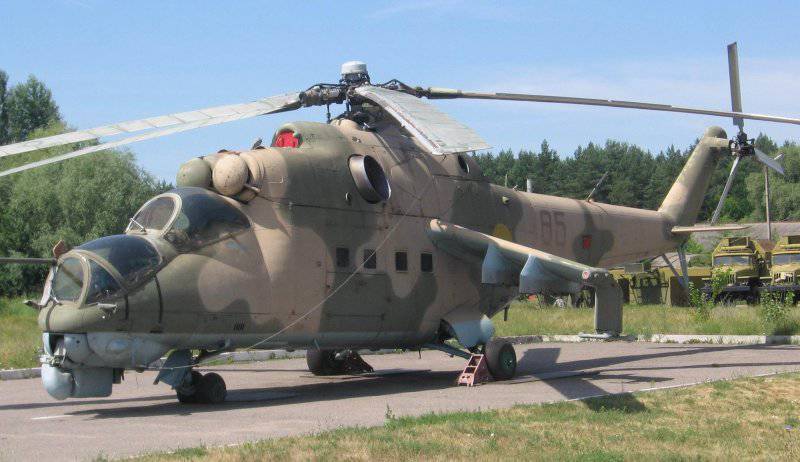 Possibility of purchasing new aviation equipment for the needs of the Armed Forces of the Russian Federation due to the lack of necessary funding makes the problem of modernization of the existing combat fleet of aviation of the Ground Forces (SV) one of the key at the current stage of military reform. Currently, the industry has developed a number of new generation attack helicopters, but their serial production, in fact, has not begun.

As part of the government program for the modernization of the Mi-24 yesterday the Moscow helicopter plant named after M.L. Mile introduced the Mi-24ВМ combat helicopter (export version is the Mi-35М). It has main rotor and tail rotor with fiberglass blades, designed for the Mi-28H, more powerful precision weapon, as well as on-board equipment, providing round-the-clock combat use. The upgrade will extend the life of the existing Mi-24 (Mi-35) helicopter fleet for at least 10-15 years. A significant improvement in flight performance, improved weaponry, and the possibility of combat use at night will increase the combat effectiveness of the Mi-24ВМ by 1,7-2,2 times as compared to the Mi-24.

The wing of the modernized helicopter also underwent modifications: its scope was reduced to an external pylon. At the same time, the number of more advanced ATGM “Attack”, installed on external pylons on two APU-8-4У, remained the same - sixteen. To increase the autonomy of the combat use of the helicopter, it is proposed to install an armament suspension system built into the wing. If the location of the LIPA SOEP-1B installed earlier was dictated by the conditions of air-to-air missile protection from the IK-GOS, then the position of the more advanced Mak-UFM protection station installed on the lower surface of the tail boom was dictated by the provision of protection from missiles MANPADS.

The Mi-24BM is equipped with a modern, highly efficient armament complex: the fixed mobile cannon mount NPPU-23 with the GSH-23 cannon (ammunition kit - 470). The mobility of the gun in azimuth is within + 10 ...- 40, in elevation - + 60 ...- 60. On girder holders, a suspension of armament is provided under each console (up to the 16 ATGM of the Ataka-V kit, Malyutka or Phalanx-M; up to the 10 NUR C-13; up to 80 NUR C-8, to 2 SD of the air class -air ", bombs caliber up to 500 kg). For combat work at any time of day, the helicopter is equipped with a round-the-clock optical-electronic observation and sight complex, night-vision goggles and a thermal sight; To increase combat survivability, the helicopter can be equipped with an onboard defense system - a screen-exhaust device, an active Lipa jamming station, infrared trap cassettes, and an alarm station about the exposure of an enemy radar helicopter L006LM.

The experience of operating the Mi-24, including during combat operations in local conflicts in the absence of modern air defense, showed that the retractable landing gear gives him nothing but trouble. True, this is true only if we neglect the gain, which gives cleaning the chassis. With the landing gear removed, the Mi-24 helicopter on the 30% in the radar wavelength range, has a greater maximum flight speed and lower kilometer fuel consumption at cruising speed on the 10 km / h. In the case when the chassis could not be released or simply forgot about it, this often led to the machine’s failure for a long time, and the crew received serious injuries. Therefore, we decided to make the chassis non-retractable, and the extra freed 120 kg will not interfere.

They improved the radio equipment and weapons, including the radio command guidance equipment ATGM ╚Ataka╩ - ╚Tor-24╩, which replaced the previous турSturmı╩ and equipment ╚Raduga-Sh╩. And their kit increased to 16 missiles. New missiles allowed not only to increase the probability of hitting targets and expand their range. Since it will be possible to use ATGMs with various warheads (cumulative, high-explosive fragmentation), their goals will be not only armored vehicles and Tanks, but also long-term fortified firing points of the enemy. ATGMs can also be used to combat aircraft, as they are equipped with a non-contact radio fuse. And the planned installation of the on-board computer complex BVK-24 and a laser rangefinder will significantly increase the effectiveness of weapons. In addition, in the process of modernizing the helicopter, it is proposed to include the 9M39 Igla-V small-sized anti-aircraft missiles in the air-to-air version of the armament.

Provision is made for the creation of an amphibious-transport modification intended for the landing of a tactical assault force to 8 people and reconnaissance sabotage groups, supplying the advance units with ammunition, transportation of military units and cargo inside the cabin weighing up to 1500 kg. The sanitary option is designed to evacuate the wounded from the battlefield and transport the sick. The helicopter provides space for two stretchers, two sedentary patients and one health worker. In the car are placed funds for first aid, oxygen equipment. To inform the crew about emergency fuel residues, fire in engine compartments, failure of hydraulic systems and other emergencies, a voice informant and light alarm systems can be installed on the helicopter. Radio communication equipment provides reliable two-way radio communication of the helicopter with other aircraft in the air, as well as communication of the helicopter with ground points in the MV1-MB2-UHF-KV frequency bands. Flight control, stabilization of its angular positions (at the rate, roll, pitch and height) is provided by the SAU-B24-1.

In comparison with the basic version of the Mi-24, the construction of the Mi-24ВМ helicopter is much easier. Provides for the use of separate systems, units, components, equipment and weapons of the Mi-28H. The wing of the helicopter is shortened and lightened with a reduced number of suspension points and the use of lightweight girder holders. Non-retractable chassis, which also leads to a simplified design. To protect the crew, the front cockpit is equipped with a bulletproof windshield and an armored seat of the pilot. Armored plates can be installed on the sides of both cabs and on engine hoods. In order to provide the possibility of piloting the helicopter in the event of a pilot being wounded, the installation of redundant controls is envisaged. Steering screw - X-shaped, four-bladed. The blades of the main and tail rotors are equipped with an electrothermal anti-icing system. The helicopter can be equipped with a dust protection device. The modernization program provides for organizational measures to extend the life of the helicopter.

For potential customers developed five options for upgrading the Mi-24, and the proposed program allows you to implement a combination of any of them. Modernization works can be carried out directly in the front-line units, at re-enterprises and serial factories. For foreign customers who operate more than 300 helicopters of this type, the cost of reworking the Mi-35 in the Mi-35 will be from 1 to 1,5 million dollars. 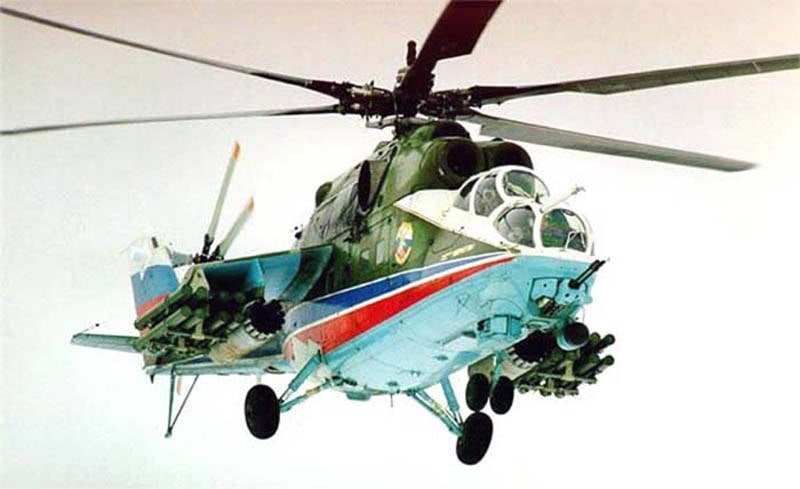 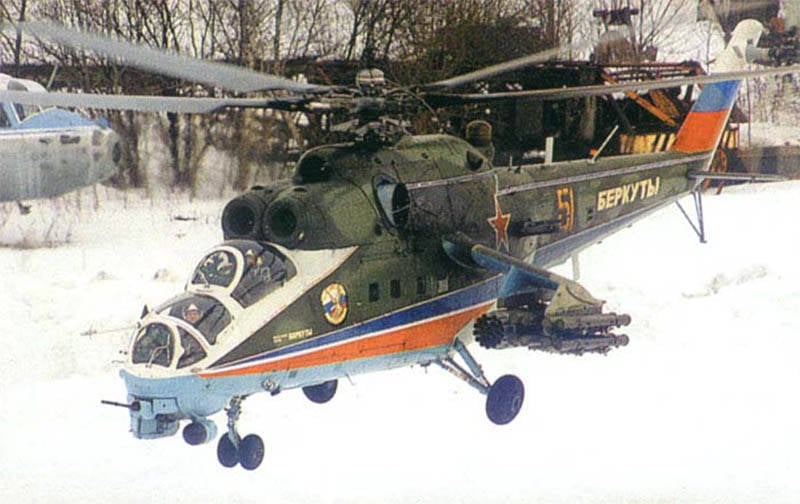 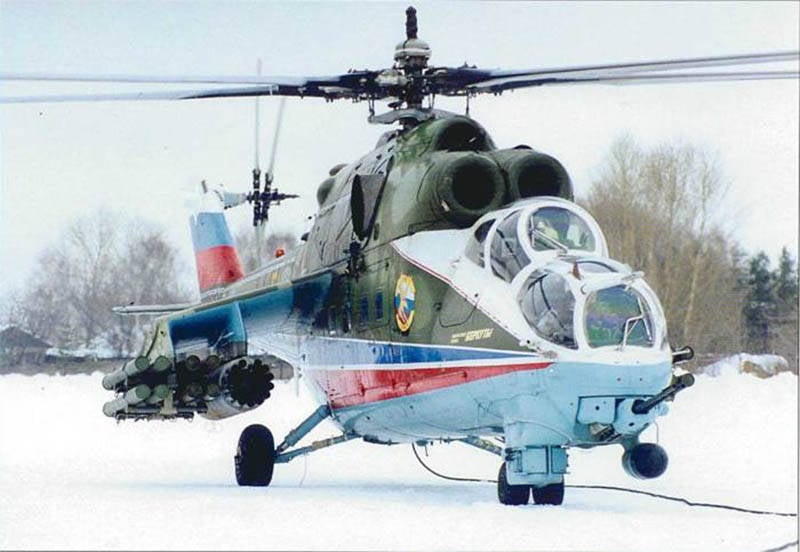