The negative consequences of the NATO campaign in Libya, which could not be 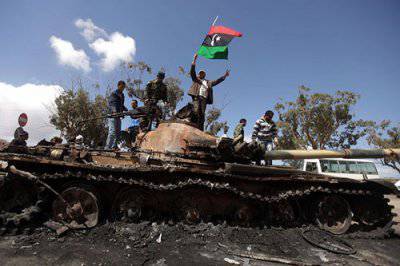 Under the guise of humanitarian slogans, the North Atlantic Alliance (NATO) overthrew the legitimate government of Libya with brutal air strikes and brutally massacred its leader, M. Gaddafi. The negative consequences of NATO's interference in the internal affairs of Libya have once again convincingly proved the need to introduce common international legal approaches to the security problem both in Europe and in the world.


The 2013 year in Africa began as a continuation of the 2011-2012 situation created by the NATO military operation in Libya. As a result of this operation, launched under the pretext of "protecting civilians and in support of the new Libyan revolutionaries," the legal government of the country was overthrown, and its leader, M. Gaddafi, was brutally murdered.

The consequences of the NATO campaign in Libya are disastrous. The result of NATO air strikes was the actual collapse of the country as a single state. The real power in the country belongs to a multitude of armed groups created according to the territorial-tribal principle and not subordinate to the government in Tripoli. At the same time, the armed groups that actually govern the country are controlled by Al-Qaeda and the Justice and Construction Party (Muslim Brotherhood Branch).

Having received “free democracy” from NATO, the Libyans lost a number of social guarantees that they had under the authority of Gaddafi: free electricity, education, medical care, obtaining agricultural land if they wanted to farm, free education in foreign universities, interest-free loans, subsidies for buying a new car 50% of its cost, low cost of gasoline (0,14 dollars), preferential prices for a number of food products (for example, you could buy 0,14 dollars for 40 dollars ok bread) and others.

The number of refugees reached 180 thousands of people. As a result of the use of bombs with depleted uranium by NATO members in the north of the country, territories have arisen in which the radiation background is several times higher than the allowable values.

The flames that NATO has ignited in Libya today have spread to West Africa, in particular, to Mali. The Tuaregs who fought on the side of Gaddafi raised a rebellion in the northern part of the country and took it under control. When the situation became critical for the Mali government, France decided to defend its former colony, based on the need, above all, to defend its own interests in Africa. Thus, another “hot spot” has formed in Africa. And given the fact that Mali is an Islamic state (80% of its population is Muslim), then we can expect the opening of a new front of opposition between the West and the Islamists, whose ranks are replenished by militants from other African countries. One of the groups operating in Mali, the Movement for Unity and Jihad in West Africa, is already threatening Paris with terrorist attacks in France itself.

After the end of the conflict in Libya, terrorist organizations became more active, with which a number of armed attacks on Western diplomats were connected. During one of them, the American embassy in Benghazi was attacked and several diplomats were killed, including the US ambassador to Libya. Consuls of Great Britain, Italy and some others were also subjected to armed attacks.

The fall of the Gaddafi regime under the NATO bombs contributed not only to the rapid arming of extremist groups of all stripes on the African continent, but also to the intensified Islamization of certain territories. The short-sighted policy of the West towards the Libyan regime led to the elimination of an important outpost, which had sufficient authority and, most importantly, resources and instruments of influence (in the form of numerous banks and funds) in order to keep the policies of the leaders of many African states under control.

The fall of the Libyan regime opened the way for the African continent to the Arabian monarchies and, above all, to the main Libyan opponent, Qatar.

NATO's intervention in the internal affairs of Libya had certain political implications for the alliance itself. Thus, the United States abandoned its traditional leadership role in conducting the operation, along with the refusal of Germany to participate in it. Under these conditions, for the first time since the end of the Cold War, France and Great Britain took over the leadership and the main role in the operation. The participation of Western countries in the war in Libya caused protest sentiments in Germany and Spain.

All these and other negative consequences of NATO interference in the internal affairs of Libya could not be if the West supported the initiative put forward by Russia in 2008 in the development and conclusion of a new treaty on European security, which would act on the basis of generally accepted principles and norms of international law and would be uniform and mandatory for all countries of the Organization for Security and Cooperation in Europe (OSCE).

What is characteristic is that the United States and Great Britain, which in Libya were one of the main pioneers of the events that led this country to the catastrophe, and its population to poverty, have shown particular rejection of Russia's proposal to sign a new treaty.

It is also obvious that the resolutions of the UN Security Council on Libya and Mali, which sanctioned the "peacekeeping actions" of the United States, Great Britain, France and other NATO members here, with a new force raise the question of the UN’s role in the modern system of international relations, leave open the question of the limits of international interference in the internal affairs of sovereign states, on the protection of human rights during armed conflicts, on the activities of the Security Council in resolving conflict situations, on the mechanisms for implementing resolutions.

Why does the Libyan rebels take the UN under its protection, and in Mali authorizes the cleansing of the north from the Tuareg? How are Syrian terrorists receiving support from France and weapon to fight the legitimate government, better Malian, which fights the same France? These are questions that are not answered in the UN.

Ctrl Enter
Noticed a mistake Highlight text and press. Ctrl + Enter
We are
About Stalin and KhrushchevNikolay Silaev, Andrei Sushentsov: Georgia after the elections and prospects for Russian-Georgian relations
28 comments
Ad