"Serdyukov Dacha" continue to build, despite the criminal case 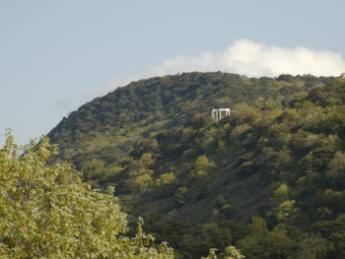 The members of Yabloko, who discovered Serdyukov’s summer residence on the territory of the Bolshoi Utrish Kuban reserve last year, visited the site again. They were surprised to find that, despite the criminal cases related to the name of the minister, the construction of elite real estate continues, environmental requirements are grossly violated. The activists appealed to local deputies demanding to cancel the deal on the transfer of land to the Ministry of Defense and donate a freshly built home to a children's sailing school.


On Friday, the public inspection department headed by the chairman of the Yabloko party, Sergei Mitrokhin, visited the Bolshoi Utrish reserve (territory of Anapa, Krasnodar region), where in June last year the party members discovered the “Serdyukov dacha”. Breaking through the blockade of guards, activists got into the territory of the object. As the politician told RBC daily, he is in the final stages of construction, the work has not been stopped. Mr. Mitrokhin personally discovered fresh drywall and mounting profile, dry mixes that can not be stored on the street for a long time. “There is a shameless seizure of land, the destruction of a natural territory,” he said.

The outrage of the politician is connected with the fact that for almost a year he and his colleagues have been fighting against construction, but, despite the resignation of Anatoly Serdyukov and a series of criminal cases, the construction of a summer house at each visit is getting closer to completion. The case of the illegal transfer of land to the husband of the ex-Minister Valery Puzikov’s sister was initiated in February and combined with the Oboronservis case. According to the military investigation, in the 2010 year, the former minister asked the Anapa administration to allocate more than 9,2 thousand square meters for the construction of the radar station. m on the Black Sea.

Valery Kostenetsky, secretary of the Anapa Coordination Council, spoke about another address by Mr. Serdyukov in 2009 (available to RBC daily) - addressed to the head of the city, Tatyana Evsikova, with a request to transfer “for the needs of the Ministry of Defense” three buildings in Bolshoi Utrish: summer house, gatehouse and garage with a total area of ​​168 square. After all the requests, the question was raised twice in the city council of deputies. From the second attempt, it was possible to get the necessary number of votes, and the land was transferred to the Ministry of Defense, which issued it to the balance of the state unitary enterprise “District material warehouse of the Moscow District of the Air Force and anti-aircraft defense”. Subsequently, the site was privatized by the creation of an open joint-stock company, and after some time it was recognized as a non-core asset and sold for 110 million rubles, which is 57 million below the market price.

The chairman of the Anapa branch of Yabloko, Alexey Egorov, who also visited the cottage on Friday, has already appealed to the council of deputies of the city. “They were misled, saying that the site will be used as a station. Since this is a fraud, I ask you to recognize the transaction as insignificant and return the land to municipal property, and hand over the building to the children's sailing school, ”he explained.

The construction of the dacha, as it turned out during the inspection, violates not only anti-corruption legislation. According to the coordinator of the environmental watch for the North Caucasus, Andrei Rudomakhi, the landscape was changed at the object: the house was cut into a slope, the sea water area was filled up, and the Red Book trees were cut down. This is contrary to the provision on the reserve Big Utrish. “This construction is underway without state environmental impact assessment. We will seek verification of the prosecutor’s office and Rosprirodnadzor, ”the activist stressed.

Ctrl Enter
Noticed a mistake Highlight text and press. Ctrl + Enter
We are
The court arrested the next "cottage Serdyukov" - land in the suburbs of AnapaOSCE Inspection - a courtesy visit or security control?
102 comments
Information
Dear reader, to leave comments on the publication, you must to register.