Interrogation of Abramovich: FBI is interested in the World Cup in Russia 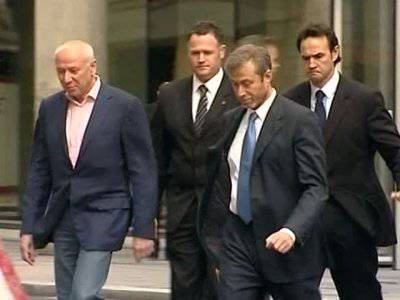 Russian oligarch Roman Abramovich was interrogated by agents of the Federal Bureau of Investigation (FBI). Lawyer Alexander Dobrovinsky explained that "Americans were interested in how Russia got the right to host the 2018 World Cup."


“The FBI suspects the corruption component in choosing Russia for the right to host the championship,” the lawyer said. Alexander Dobrovinsky stressed that Abramovich was only interrogated, "there were no detentions." Interestingly, Dobrovinsky previously represented the interests of another oligarch - Boris Berezovsky. FBI agents suspect that Russia has acquired the right to host the world football championship by bribing FIFA officials, Interfax explains.

“We have not received any evidence or evidence about corruption in the election of host countries of World Cup 2018 and World Cup 2022. Do you think that if something was really revealed, FIFA President Joseph Blatter or any other official would not pay attention to it? If there is any new information and additional evidence that deserves attention, they will be considered by the ethics committee, "said FIFA General Secretary Jerome Valcke in response to the accusations of journalists from Western publications that Russia and Qatar did not qualify for the championships. by natural means.

Earlier it was reported about the delay in the departure of the aircraft Abramovich. The representative of Abramovich John Mann denied this information.

Roman Abramovich arrived in the United States in anticipation of the birth of his girlfriend Darya Zhukova.

The representative of the businessman, John Mann, confirmed that Abramovich really is now on his own business in the United States, but "completely free."

Roman Abramovich was born October 24 1966, in Saratov. At an early age, he became an orphan, brought up by his paternal relatives. He lived in the cities of Syktyvkar and Ukhta. In 1974, Roman Abramovich moved to Moscow.

About the turnover of Roman Abramovich are legends. In particular, while serving in the army, Abramovich and other soldiers for military needs needed to clear a place either under the site, or under the road in the forest. The novel was not taken aback: he sold the land in parts to local residents for felling. Two days later, the weight of the forest at the site of the future military facility was cut down.

Abramovich began his career in the 1987 year as a construction mechanic №122 of the Mosspetsmontazh trust.

From 1991 to 1993, Abramovich was the director of the small company AVK, which was engaged in the sale of petroleum products. In 1992, the Moscow prosecutor’s office detained a businessman for embezzlement of state property on a particularly large scale. The case was closed "for lack of corpus delicti."

Roman Abramovich was the Governor of Chukotka until 2008.

At the moment, Roman Abramovich is divorced, his first wife, Olga Abramovich, was born in Astrakhan, and the second, Irina Malandina, has five children: 20-year-old Anna, 17-year-old Sophia and 11-year-old Arina, and sons - 16-year-old Arkady and 9-year-old Ilya.

In 2009, Roman Abramovich and his girlfriend Dasha Zhukova had a son, Aaron Alexander.

Since 2003, Roman Abramovich owns the English football club Chelsea (Chelsea). The cost of a football club is estimated at 658 million dollars.

Abramovich’s personal fortune is estimated at over 12 billion dollars. With this condition, he ranks ninth in the ranking of the richest people in Russia and 68 - in the world.

Ctrl Enter
Noticed a mistake Highlight text and press. Ctrl + Enter
We are
On enhanced security measures at the World Cup 2018 in Russia
48 comments
Information
Dear reader, to leave comments on the publication, you must to register.