April 2 2013
5
In the previous article it was possible to get acquainted with a rather old one. weapons built on the system of Lorenzoni, which increased the rate of fire of pistols and rifles with a flintlock to unimaginable for those times limits. However, not only Michele Lorenzoni saw the need to increase the rate of fire. weapons to increase combat effectiveness, other designers also worked in this direction. This time we will get acquainted with one more sample, which has received very little distribution due to the complexity of production, but significantly increased the efficiency of the detachment armed with such weapons, namely Ferguson’s rifle, 0.65 inch caliber.

Developed this weapon, as the name implies, was Major Patrick Ferguson at the beginning of the 18th century 70 in England. The main idea of ​​the designer was to create a reliable sample of weapons that could be charged from the breech breech and quickly enough. The main drawback of the long-barreled weapons of the time was that it had to be charged from the barrel muzzle, and since by that time the weapon was rifled, considerable effort was needed to push the bullet through. Make the same reloading weapons in the supine position was simply impossible. Accordingly, during reloading the fighter was an excellent target, which the enemy used. Already this alone suggested that the weapon should be charged from the breech breech and then the shooter would become a more difficult target for the enemy. However, until that time, it was far from modern weapons, and it was impossible to base the idea used in another sample, so I had to turn on the fantasy and think up my own version of a rifle, charged fairly quickly from the breech breech.

The man's fantasy worked, and he found a way to not only create a sample with reliable locking of the barrel, but even standardize the weight of gunpowder in his weapon, and, of course, increase the rate of fire. The basis of the weapon was a cylinder with 11 cuts, moving perpendicular to the barrel of the weapon. The rifling step was such that in one turn to open the chamber, put a bullet in it, fill up the gunpowder and, in one turn, close the breech breech, simultaneously removing the extra powder. As a result, the weapon has become possible to charge already in the supine position, and the rate of fire has increased many times. When demonstrating his weapon, Ferguson kept the pace of fire around 4 shots per minute for five minutes at a distance of about 200 yards, which was an absolute record for the weapons of that time, with only 3 slip recorded. The maximum rate of conducting aimed fire could be twice as long with sufficient skill of the shooter. Thanks to a rather convenient handle of the turning mechanism, which served as a rifle safety clip, the simplicity of the reloading process and the possibility of reloading in the most inconvenient positions, these weapons were of interest to the military, but there was one catch ... 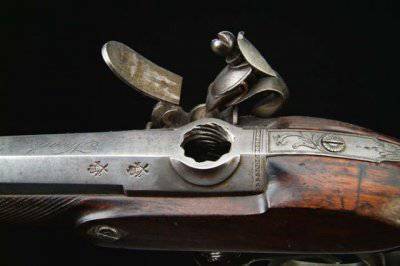 The snag was that the production of weapons was very expensive and could not compete with the weapons common at that time. In particular, it was necessary to achieve a very high precision fit of the locking cylinder, which at that time was a task for many days of work, and the work was very laborious. In this regard, the weapon could not get wide distribution, but about 1000 units were still produced, and more than 2 years were spent on it.

Despite its cost and complexity in the production of these weapons still war, though a little. It was possible to prove himself to this model in the war for the independence of the USA, where the British managed to defeat the militia, largely due to the fact that now they could shoot more accurately and at longer distances, as well as reload the weapon without being substituted for the enemy. Ferguson himself was well aware that his detachment was more effective only thanks to more advanced weapons, so his attitude to his invention was special. Thus, the major considered it superior to his dignity to use this gun against officers, although he naturally did not prohibit his soldiers from doing so. There is quite a truth-like legend that Major Ferguson had the opportunity to shoot at George Washington himself, but because of his beliefs, he never did. True or not, it is difficult to say, but the fact that a person had his own rather strange beliefs, by the standards of wartime, is confirmed by a multitude of documents, both official and not. Actually, the war for the independence of the United States was the only military conflict where these weapons were used officially. There is evidence that in the war of the North with the South, in the hands of the southerners, these rifles were also encountered, but there were very few of them. 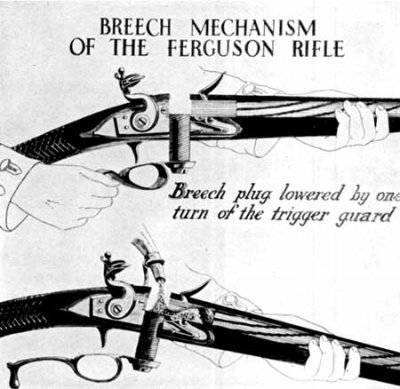 A few words should be said about the maintenance of weapons, since with such a design the rifle must be very sensitive to contamination, including those that form on the thread of the locking cylinder during the combustion of gunpowder. Any weapon loves cleanliness and lubrication, which is the key to its trouble-free and long work, but not everything is as simple as it may seem at first glance. Since the rifle has become a kind of part of the culture of the United States, it is not surprising that they tried to revive it in modern times. Despite the fact that the weapon was manufactured using the most advanced, at that time, metal processing methods, which allowed to achieve very high accuracy, only the 3-4 shot resisted the rebuilt samples, after which they needed to be cleaned, because the next shot could clog the locking cylinder that led to his jamming. This phenomenon was not at all tied to what was said in the documents about these weapons and many began to assume that the characteristics of the Ferguson rifle are clearly overestimated. The situation was saved by a document in which one very insignificant detail was indicated, namely the composition of the lubricant for the locking cylinder. The mixture of beeswax and fat immediately transformed the weapon, and it began to withstand at least 60 shots in a row without maintenance. And, it would seem, quite a little thing.

As noted above, the number of weapons produced was about 1000. These were samples with different lengths from 1220 millimeters to 1520 millimeters. The weight of the samples naturally varied, but on average was equal to 3,5-4 kilograms. The effective range of fire from such a gun was up to 300 meters. The rifle caliber was the same - .65. After Ferguson’s death, the weapons were forgotten, in many respects, Minier’s bullets contributed to the barrel bore when charging, and when fired under the pressure of powder gases, they expanded and were already moving along the rifles in the barrel. A lighter charge also increased the rate of fire without increasing the price of the weapon, so the Ferguson rifles flew.
It should be noted that this weapon, as they say, was ahead of its time. Despite the fact that it was not quite familiar design, it was clearly closer to the younger weapons. Actually, this allowed this sample to become quite famous. In all this “ugliness” I personally only care about whose money the rifles were made for, didn’t the major pay for it himself?