Rockets hid in a container 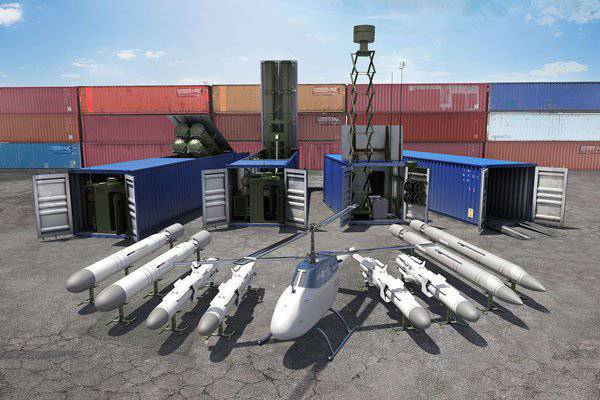 ] Mobile-modular missile system CLUB-K, which has no analogues in the world, opens a new page in the creation of a defensive weapons new generation.

Our country has not only proved that it can in the shortest possible time create and bring to the market fundamentally new weapons systems. Domestic experts actually opened a revolutionary direction in the design of military equipment. According to the head of the concern, which developed the CLUB-K, Georgy Antsev, comes the era of modular weapons. The combat systems will be assembled from a kind of cubes. And Russia in this direction is becoming a fashion trendsetter.

The idea of ​​placing various combat systems in special mobile modules is not new. However, only we have guessed that the use of standard containers - 20 and 40 foot - as such modules. In them are hidden multipurpose missiles of type X-35UE, 3М14, 3М54, as well as reconnaissance and command and control systems. It is assumed the use of unmanned helicopters of the original design. From the container cubes, you can easily and quickly collect defensive missile systems of any power and for any purpose, and then secretly move them to the zone of possible hostilities. Any container ship with Club-K complexes becomes a missile carrier with a crushing salvo. And any train with such containers or a convoy of heavy container trucks - powerful rocket units capable of appearing where the enemy is not waiting.

Know-how not only in high mobility, but also ease of maintenance, as well as one-time use. There is no need for special and expensive vehicles, transport-charging machines, much more that is required in classical rocket systems.

The costs of any state on such rocket weapons become available. Not by chance, interest in CLUB-K on the global arms market is growing. By the way, the appearance of the first such systems in the form of layouts at international exhibitions even frightened some in the West. Moreover, one of the semantic contents of the English word "club" is a cudgel. And the Russian club will crush anything.

However, according to Antsev, fears are in vain, since we are not talking about offensive, but purely defensive weapons. Container CLUB-K will not allow to approach the enemy coastline the fleet and will not be allowed to attack on the ground. Any target at ranges up to 300 km will be destroyed either by one high-precision missile, or by their simultaneous salvo. At the same time, identifying the launchers to the enemy will be very difficult.

For the first time, the complex in export performance was shown at the LIMA-2009 gunsmith. And if four years ago it was shown in the form of posters and in mock-ups, then at the LIMA-2013 showroom that is opening today, potential foreign customers will be shown a virtually finished system.

Last year there were successful launches, which confirmed that it is possible to place missiles in containers and shoot from them. Then fired anti-ship missile X-35. Its peculiarity is that the rocket flies to the target at a height of no more than fifteen meters, and four meters in the final segment of the trajectory. To repel her blow is almost impossible. One such rocket is guaranteed to destroy a warship with a displacement of 5000 tons.

To date, the formation of the missile complex as a whole has been fully completed. And the readers of “Rossiyskaya Gazeta” are the first to see CLUB-K in its full complement.

However, if necessary, the configuration of the complex, as well as its missile equipment, can vary in the widest
limits - not for nothing that it is modular.

Ctrl Enter
Noticed oshЫbku Highlight text and press. Ctrl + Enter
We are
The action “Military service under the contract is your choice!” In Rostov-on-Don: future contract servicemen, exhibitions and “Russian Knights”Completed the creation of a mobile combat complex CLUB-K
52 comments
Information
Dear reader, to leave comments on the publication, you must to register.