Mortars and media - weapons against the Syrian people 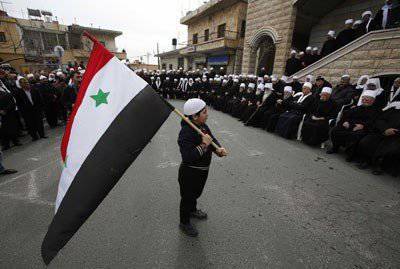 24 March, the day of the 14 anniversary of the NATO aggression against Yugoslavia, heard such a crash in Damascus that the tragic days of Belgrade were remembered, but I didn’t have to witness that, but those shots were seen by the whole world ... NATO members - they do it with the hands of their hirelings from the so-called “free Syrian army.


Two districts of Damascus were fired. One is near the Ministry of Higher Education of the SAR, the other is not far from Abbasiinov Square. In total, 10 people were injured. Damage to buildings and many parked cars.

And while I was writing these lines, the militants fired a mortar from the Opera House in Damascus. Art is also hostile and alien to them. The 1 man died and 7 was injured.

It looks like the militants are mastering the new tactics of terror - mortar attacks against civilians are being more and more often. No one ever knows where the next missile will go. They decided to keep all residents of the Syrian capital at bay in order to break the will of the people. Tactics, quite worthy of their teachers - fascism and NATO.

The capital of Syria has said goodbye to the murdered gangsters of Muslim scholar Muhammad Said Ramadan Al-Buti, who was known throughout the Arab world for his sermons against the wicked policies of the West, for his calls for peace and unity among nations. The ceremony took place in the Umayyad Mosque, in which thousands of people took part - representatives of various denominations. Mentors of the Christian Church also came to bid farewell to a Muslim sheikh.

Syrian President Bashar Al-Asad, expressing condolences to the family of the deceased scientist, the families of others who died during the attack and the entire Syrian people, said that the blood of these martyrs, like all those who died for their Motherland, was not spilled. “We will follow his teachings, resist extremism and cleanse our country of terrorism. The Syrian people will never forget the sermons of Sheikh Al-Buti, words of true faith, love and brotherhood, which united and will unite Muslims all over the world, ”said the head of state.

Actions to commemorate those who died in the course of this monstrous terrorist act took place not only in Damascus, but also in Paris - there are also people who understand the destructiveness of the policies of the same France towards Syria.

While militants blow up mosques and bombard houses and theaters with mortars, there are other acts against Syria weapon - namely, the global media. They not only exaggerate the success of the militants, as it happened, for example, with reports that those who managed to occupy the area of ​​Wadi Ad-Deif in the province of Idleb. The command of the Syrian army categorically denied this "information", noting that this is done in order to raise the morale of the terrorists.

No, the media has descended to blatant lies and has repeatedly reported the "death" of Bashar Al-Assad. Compiled version, as if he was shot by some Iranian bodyguard. They even invented the name of the one who attempted to eat - Mahdi Yakubi (it was equally possible to write that it was Russian bodyguard Ivan Ivanov).

This kind of “information” appeared on the Israeli website with reference to some unnamed Arab media. Amy Ferris-Rotman, the same Reuters correspondent, hurried to reprint the same misinformation, from where she was taken by major Western mass media dupes.

This is the sixth time when the media "bury" the president of Syria. At first it was 27 March 2012, when Bashar Al-Assad visited the positions of the military in Homs. Then - 18 July 2012, when the attack occurred that took the lives of the Minister of Defense of the SAR and other commanders of the Syrian army. Someone started a rumor that allegedly the president was killed along with them. Then, on August 6, they created a fake twitter for Russian Interior Minister Vladimir Kolokoltsev and sent a similar “duck” through him. Then it turned out that V.Kolkoltsev doesn’t have an account in this social network at all. The following stuffing of this kind was at the beginning of December, when it was reported that he had come under fire, and the liars' imagination had even reached the point that his body was allegedly transported ... to Moscow. Then a similar rumor was allowed in February of this year - allegedly the residence of the head of state was shelled, although in fact mortar shells hit the hospital and the nursing hostel.

And now - again, such a disgrace, replicated even by some Russian mass media. And in Damascus itself, and in the Syrian embassy in Moscow, these ridiculous rumors were refuted. Moreover, Bashar Al-Assad had no Iranian bodyguard at all.

On the day when the media broadcast that Syrian President was killed or wounded as a result of the assassination attempt of the mythical Iranian security guard - Bashar Al-Assad issued a decree on the establishment of branches of engineering and electrical engineering departments of the University of Damascus in Suweida. This really is a struggle of life and death: while someone “buries” the president, he thinks about the development of science in his unconquered country.

However, on the same day, information was received that an attempt was made on the leader of the so-called “Syrian free army” Riyad Asaad (in Syria they joke: maybe the media got confused because of some consonance of names?). Blast deserter tore his leg. Knowing the customs of the rebels, we can assume that they attempted their own.

And the mores of these terrorists from the so-called SSA are visible firsthand. 24 March in the village of Yabrud, located between Damascus and Homs, there was a major disassembly between the two militant groups. They shared money and weapons smuggled in from Lebanon. During the dismantling destroyed their own warehouse, along with several militants.

At one time, Voltaire said that the Holy Roman Empire is no longer holy, Roman, or empire. About the so-called “Syrian free army”, it can be said that from the very beginning it is neither a Syrian, nor free, nor an army. It is not Syrian, as it is inspired from the outside, supplied with weapons from other states hostile to Syria, it has thousands of foreign mercenaries, especially from Libya, Afghanistan, even from Chechnya. It is not free, because there can be no question of any struggle for freedom when innocent people are killed and kidnapped. It is not an army, because terrorist groups cannot be called an army, which, in theory, the whole world should have fought.