March 26 2013
265
Estonia is one of the most extravagant countries in Europe in terms of falsifying democratic principles and using a system of double standards in relation to its own population. That is Estonia, which, despite the fact that the ninth year is in the European Union and NATO, the third year in the Eurozone, and is positioning itself as a state that has fully and completely taken the path of respect for democratic values. And the very Estonia, in which 1,29 has a million inhabitants of almost 100, thousands of people still do not have any citizenship, and are referred to by the authorities as “other” or “non-citizens”, losing the opportunity to be at the same level with the citizens of the country as in terms of sending their electoral functions and in terms of economic and educational activity.


Surprisingly, the problem of Estonian "non-citizens" has been raised as before Estonia joined the purely democratic European Union, and continues to rise until now, but the Estonian authorities, exposing this problem, seems to have no effect. Why? Because the gentlemen responsible in Brussels and Strasbourg for the civil policy of the EU member states are well aware that the overwhelming majority of the “non-citizens" of Estonia are ethnic Russians, and therefore it is not possible to accuse Tallinn of reluctance to become a full-fledged democracy.

However, the other day came from the European Union news that some pressure was put on Estonia from Brussels (very peculiar) in terms of resolving the issue with local “non-citizens”. It was reported that the Estonian authorities may consider the option of granting Estonian citizenship to children of “non-citizens”. If a child of a “non-citizen” is not 15 years old, then his parents may apply for Estonian citizenship. And if 15 years caught up, then he can do it himself.

Ironically, in order to resolve the issue with Estonian “non-citizens”, such an official was sent to Tallinn as human rights commissioner Nils Muiznieks, who got into European officials from the Latvian political elites. What is the irony here? - may ask the reader. And the fact that in Latvia itself the situation with “non-citizens” is no better than in Estonia. It turns out that one of the rudest violators of human rights is going to teach other violators of human rights what they should do in this situation. Whether in Brussels finally sbrendili, whether it is a reason for Europeans, excuse me, postebatsya over their eastern (Baltic) provinces ... They say we will send to Tallinn Muiznieksa, let them figure out what to do and how… in their Baltic shop

In the meantime, European Commissioner Muižnieks and the head of the Estonian Foreign Ministry, Urmas Paet, are discussing how to give or not give citizenship to “Russians who come to a halt”, the intrigue revolves around the economic integration of Estonia and the European Union. According to the latest data, the Minister of Economy of Estonia is depressed by the fact that Tallinn’s European partners so far do not want to make full use of the transport infrastructure of Estonia. In particular, his concern touched the railway, whose throughput becomes more and more untapped every year. The European partners, to put it mildly, had a chilly reaction to the concerns expressed by the Estonian minister (there are enough problems in Brussels without Estonians yet), after which the same main Estonian economist found nothing else but to call for the beginning of deep cooperation to ... Russia. But how so? - well-de-democratized sections of the population will say: Is Russia for Estonians not a huge Eastern threat with invariably occupying ambitions? Does the freedom-loving Estonian authorities really turn to the Russian authorities for help if they sleep and see how to enslave the space from Saaremaa to Narva ...

But, as it turned out, if everything is not okay with the economy, if Estonia takes one of the first places in the European Union by outflow of population (the number of inhabitants in this Baltic republic today corresponds to 1967 indicators of the year), then it’s time to start discussing your problems with anyone . Why not with Russia, the Estonian ministers thought, stepping over the ideology worked out over the past 25 years.

So, the Minister of Economics of Estonia expressed the words that the Russian Federation could be engaged in filling the Estonian transport system. This idea was also supported by Estonian Prime Minister Andrus Ansip, who had a nervous hiccup starting yesterday when he used the word “Russia” ... It was Ansip who expressed the hope that Russian cargo could be transported along Estonian transport routes, which would help to improve relations between Tallinn and Moscow, which ( relationship) today, to put it mildly, can not be called warm.

According to generators of the idea of ​​the possibility of transit of Russian goods through the territory of Estonia (reducing the level of transit, for example, through Finland), Estonia can become an effective transportation hub that accumulates cargo flows from Russia to the West and from the West to Russia.

It’s too early to say how ready Russia is to accept the idea of ​​the representatives of the Estonian authorities. Too often in recent years, hot Estonian guys from the ruling party have been laying a big pig for Russia to show the West how effectively they broke off relations with Moscow. Now, you see, when one fried bird began to persistently bite the soft spot, we decided to recall the growing economic integration with the eastern neighbor, that is, with Russia.
True, so that the “descendants of the invaders” did not relax, immediately after Andrus Ansip’s proposals, Estonian President Toomas Ilves took the floor. 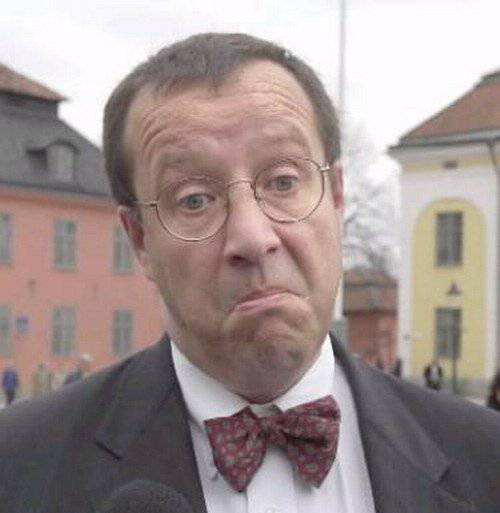 In pure English (which seems to be a certain hint at the direction of the message), he wrote in his microblog:

“On this day a year ago, the NKVD 64 separated over 20 000 Estonians from their homes and sent them in cattle cars to Siberia. No one asked for forgiveness. "

“Estonia is still waiting for an apology from those who call themselves in other cases the successors of the USSR.”

In addition, the Minister for Foreign Affairs of Estonia, Mr. Vaher, supported his president in a peculiar manner. The Minister said that Tallinn should urgently strengthen the fight against Russian propaganda in the country. According to Ken Marti Vahera, propagandists standing in the service of the Kremlin in the eastern regions of Estonia are especially zealous, forcing the local people astray. Like, yes - let the “non-citizens” live here without rights and prospects, but we will not give up our “non-citizens” into the hands of Russian propaganda ...

Well, now this is more like the Estonian authorities. And then we already here and really thought that Estonia is going to stretch out its soiled little hand to start business contacts. But the Estonian authorities still managed to make a curtsey in the direction of the West, which Estonia needs as the fifth leg of the dog, but who will continue to do everything so that this leg rises in the right direction ...

By the way, to strengthen the opposition to the Russian propaganda, the Estonian Ministry of Internal Affairs took special measures: it raised its salaries to its employees working in the eastern districts of the country by 25%. This caused a flurry of discontent among ordinary Estonian citizens who can’t understand how the Estonian police are going to protect them from Russian “propagandists”. At the same time, one of the Estonian trade unions published material that the Estonian authorities themselves form a class of the working poor. Representatives of the Silmet union cite the following data on income and expenditure in north-eastern Estonia.

The rent is 108 euro, electricity - 22 euro, television - 9 euro, telephone - 15 euro, computer - 13 euro, water - 11 euro, gas - 4 euro. The average salary in Sillamae is 318 euros, including taxes and deductions. On life remains 136 euro. At the same time, Estonian unemployment allowance is almost 77 euros, and the state compensates the cost of accommodation for the unemployed Estonians. It turns out that the average Estonian hard worker is almost in the same position as the average Estonian unemployed. And if we take into account that the standard of living in European Union Estonia corresponds only to 65% of the average for the European Union, then the question rises to the surface: how can the authorities of the Estonian state ensure that these problems do not disturb the minds of ordinary citizens. And the Estonian authorities have been finding the answer to this question for more than 20 years: Russia is to blame for everything, they state in self-hypnosis. It was she who occupied us for many years, building us schools, factories, processing plants, residential complexes, developing agriculture and light industry. True, the Estonian authorities do not bring the second part of this proposal to their citizens ... Of course, they do not bring it, but then, God forbid, the pro-Russian propaganda will come out.

Ctrl Enter
Noticed oshЫbku Highlight text and press. Ctrl + Enter
We are
Latvia and Estonia wait for non-citizens to die out themselvesMemo to mercenaries in Africa
Military Reviewin Yandex News
Military Reviewin Google News
265 comments
Information
Dear reader, to leave comments on the publication, you must to register.