March 26 2013
117
The popular Russian humor program Yesterday Live, shown by Channel One last Sunday, caused a scandal in Sweden. Some have decided that the Russians scoff at the Swedish army. However, the country's leadership enjoyed watching the video. 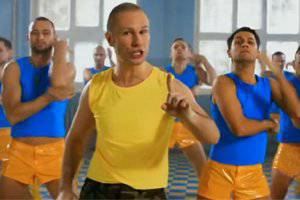 The parody of the commander-in-chief of the Swedish armed forces, Sverker Joranson, raised fears in the authoritative Swedish newspaper Aftonbladet. The initiative of the general, who spoke at the beginning of the year with the statement that the Swedish army would not last a week if Russia attacked, became a serious and acute political issue for the country, the newspaper writes.

The general made a statement on the eve of the annual national conference "People and Defense", which was attended by NATO Secretary General Anders Fogh Rasmussen. The conference discussed, in particular, the question of the entry of Sweden into NATO. However, Swedish Minister of Defense Karin Enstrom stressed that "the issue of NATO is not on the agenda of the Swedish government." Nevertheless, the debate began at the highest level. The general himself, who made so much noise, was sick right at the conference and until March 17 will be on sick leave.

And finally, Sweden waited for the “answer of the Russian bear,” notes Aftonbladet.

According to Aftonbladet, Channel One presented the Swedish army "frail, dressed in yellow-blue tights". Under the well-known composition of the ABA group Mamma Mia, a team that looks more like IKEA managers, is dancing against the background of Russian fighters. First, a figure appears in the foreground that tells about the Russian attack. Of course, the Aftonbladet retelling is very, very inaccurate. (A TV presenter appears in the video, who quotes the words of the commander-in-chief. Then the general’s exit follows.)

“Finnish defense is not enough to protect itself against the landing of 1000 military groups,” according to the newspaper, a figure representing Sverker Joranson sings. (In the video there are words: “It is unlikely that a shield from Finland will protect us if thousands of Airborne Troops fly in ... Russians walk on foot, it's even worse”.)

Taunts about the possibilities of the Swedish defense were broadcast throughout Russia, emphasizes Aftonbladet. (In the video: “They will conquer the country in a week in order to have time to rest on Friday ... A map of Sweden is about to be spread on the table, but, ironically, a table from IKEA.”)

“The comments of the commander-in-chief about the week are really ridiculous, considering that Russia reflected the invasion of Napoleon and Hitler in just a few months,” commented the Swedish expert on Russia Jakub Sviekiky (Jakub Swiecicki) from the Foreign Policy Institute (Utrikespolitiska institutet). From such incompetent comments it becomes a bit creepy. Why does Aftonbladet demonstrate absolute ignorance stories even in the framework of the classical school education?

At the end of the sketch, the “commander-in-chief” of Sweden declared that Sweden should renounce the policy of neutrality, “leave NATO” and enter into an alliance with Russia instead. (In the video, Russia hospitably welcomes the general.)

“The video is ridiculous,” Acting Commander of Sweden Jan Salestrand told the Svenska Dagbladet newspaper. - We are absolutely not going to contribute to depicting Russia as an enemy or enemy. In matters of self-defense, we behave as the situation in the world requires. No one can now predict which political force will dominate in seven, ten or twelve years. Local wars or attacks, for example, on Kuwait, quickly broke out and taught us to think about the future.

Even the Swedish Minister of Defense, Karin Enstrom, figured in this rather long four-minute view. And ridicule sounded about the fact that she is a woman, writes Aftonbladet.

“Our potential is weak and our defense minister is wearing a skirt,” says Sverker Joranson, not appealing. (In the video: "Our potential is fragile, and the Minister of Defense is in a skirt.")

Karin Enström told Aftonbladet newspaper that she had watched this video and considered “such freedom of speech remarkable, especially for Russia.”

The translator of the video into English, Georgos Charalampidis, was forced to turn to the Swedish audience in the comments to the Aftonbladet article. He stressed that the creators of the acclaimed video clip did not even have in thoughts to scoff at the Swedish army and the defenses of the kingdom. The Russians joked on a completely different matter: they ridiculed Sverker Joranson himself, who went too far in relation to Russia.

Many Aftonbladet users found the video very funny. “No one will attack us. We have neither oil nor minerals. Only pizza with kebabs, ”one of the users joked.
About Sweden starts at the 24 minute

Ctrl Enter
Noticed oshЫbku Highlight text and press. Ctrl + Enter
We are
About Stalin and KhrushchevWhat you didn't want to know about England
Military Reviewin Yandex News
Military Reviewin Google News
117 comments
Information
Dear reader, to leave comments on the publication, you must to register.