"Planetary Cancer" and the death of Chavez 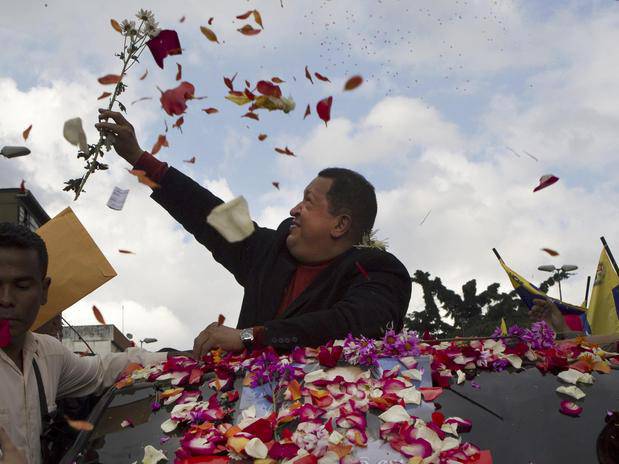 In the second decade of March and. Venezuelan President Nicholas Maduro announced the formation of a government commission to investigate the causes of “dark forces poisoning with the aim of aggression against Venezuelans and Latin America” 58-year-old Hugo Chávez (1), “the type of cancer that does not agree with any type of this disease ... that they were able to influence his health with the help of the most advanced technologies ”(2).


A few hours before the death of the Venezuelan leader, Vice-President N.Maduro said in an address to the people: “We have no doubt that the cancer of commandant Chavez was the result of the attack of his enemies” (3). Under the enemies meant the United States. The head of the security service of President Chávez, General Jose Ornella, then confirmed this statement (4). A little later, there was information about the expulsion from Venezuela of two employees of the US Embassy, ​​and N.Maduro reminded his fellow citizens that in the USA as early as 1940. there were "scientific laboratories where they experimented with the initiation of cancer ... after 70 years passed, their impact could have progressed significantly" (1).

William Chavez himself spoke about this a few years ago, in 2011, referring to sudden cancer diseases of three South American politicians and stating that they are a consequence of the actions of the CIA, which thus gets rid of unwanted US leaders. Shortly thereafter, the cancer was found in Chavez himself (5). Indeed, the leaders of the Latin American continent of the "left" sense, not demonstrating pro-American sympathies, the last 3-4 of the year began to be affected by a strange epidemic of cancer. Now in this deadly list already nine people:

7. Dilma Rousseff, President of Brazil, Cancer of the Lymphatic System (2009)

The list could also include Colombian President Juan Santos, who suddenly had prostate cancer (2012). However, a few months later, which brought about positive changes in the relations of his regime with the United States, he declared that he was “completely cured” ...

Numerous researchers and commentators in the United States have noted that the facts, “seemingly separate local incidents,” collectively demonstrate a very disturbing trend. She points to the presence of hi-tech assassinations in modern global politics, often leaving no traces and looking like the slow and painful death of people who are serious opponents of the "policies of some strong states" for whom this type of murder is becoming the preferred form of "eliminating objectionable ...

Specializing in terrorism, Dr. Kevin Barrett quotes a recent confession by Republican Senator Lindsey Graham, who said that the United States killed over 4700 its political opponents in different parts of the world, including its own citizens. Dr. Barrett emphasizes that the current US military budget, exceeding 500 billion and surpassing the military budgets of China, Russia, Japan, Korea, Australia, Canada and the European Union, combined, is only the “tip of the iceberg”, since there are “black foundations, which finance "high-tech undercover methods, such as those used to crush the six leading Latin American enemies of the Empire" (6) with cancer.

The non-random nature of the cancer epidemic that "simultaneously hit the six best leaders of the anti-Washington empire in South America," is assured by such American researchers as William Blum, Kurt Nimmo, as well as Venezuelan journalists like Stephen Lendman (7).

The father of Reaganomics, Assistant US Treasury Secretary Paul Craig Roberts, states: “Throughout Latin America and the non-Western world, responsibility for the death of Chavez is placed on Washington ... Faith will never die: Chavez, the greatest citizen of South America since Simon Bolivar, was killed by Washington ... Latin Americans are aware of the hearings of the US Congress and the CIA's attempts to poison Fidel Castro made public ... The official document submitted to President Kennedy by the Joint Chiefs of Staff is known to the world and accessible online on the Internet (8).

Indeed, Castro became a champion in survival - he survived 637 attempts (data on 2006 year), many of which were prepared with the participation of US intelligence and even became the subject of jokes! (For example, the famous statement by US President D. Kennedy after the failure of one of the attempts to assassinate the Cuban leader: "When I ordered to remove Castro, I did not mean that he should be killed"). Today, Western media cite the advice given to Chavez by Fidel Castro during one of his visits to Cuba: “Chavez, be careful. These people have advanced in technology. You are too careless. Be careful about the food they offer you ... a small needle and they will inject you with anything. ”

The fact that the CIA used the president of the American Cancer Society, Dr. Alton Oschner, for his own research on cancer, has been known since at least the end of 1970's. It was known even earlier about the actions of the American special services to eliminate or neutralize political leaders objectionable to Washington during the so-called “special operations with extreme damage”. Already in 1950-60. they were put on stream. Suffice to mention the elimination of the Prime Ministers of Ceylon S. Bandaranaike (1959), Congo - P. Lumumba (1960), President of Ghana K. Nkrumah (1966), President of the Mozambique Liberation Front E. Mondlane, etc.

The elimination was dealt with by a special structure called the “Committee for Injury to Health”. For the first time, her activity was widely covered by US Department of State employee John D. Marks in the search book for the Manchurian Candidate. CIA and mind control ”(9). The author "revived" the dry facts of the report of the commission created by US President D.Ford, chaired by Vice President Nelson Rockefeller to investigate CIA experiments on people, including US citizens, and eliminate political opponents after the scandal caused by an article in December 1974. Theme in The New York Times (10). J. Marks cites many details of the secret “harming health” operations, the amount of the budget, the names of scientists and CIA agents responsible for this area, describes inhuman experiments on people, as well as poisons and chemicals that could kill or “transform into a plant” one or another politician. Quote:

“Within the framework of the MKNAOMI project, SOD employees have created an arsenal of toxic substances for the CIA. In order to kill someone within a few seconds, for example, with the help of a pill used in the event of suicide, a potent mollusk toxin was proposed in the SOD ... According to the CIA and SOD, it is more expedient to use botulin to kill. With an incubation period from 8 to 12 hours, it allows the killer to escape from the scene. Subsequently, the CIA officers supplied the mafia with pills with this deadly poison for the introduction of Fidel Castro into the milkshake. If the CIA wanted the murder to look like death caused by a natural cause, then there was a long list of deadly diseases typical of the country chosen for the operation. Thus, in 1960, the secret services chief Richard Bissell asked Sid Gottlieb to “choose a disease” that would have killed P. Lumumba, who was at the head of the Congo. At the Senate investigation, Gottlieb reported that he chose a disease that was supposed to be similar to the diseases prevalent in West Africa and which could have been fatal ... For those who CIA operatives wanted to get rid of only temporarily, SOD had about a dozen in reserve diseases and toxins of various strengths. At the end of the SOD list, staphylococcal enterotoxin, a weak form of food poisoning (weak compared to botulinum), was a substance that guaranteed a relatively good outcome. This infection was almost never fatal, with the victim being disabled for about a period from 3 to 6 hours. Venezuelan equine encephalomyelitis virus was the most virulent among the available SOD products. He usually paralyzed a person from 2 to 5 days, after which he remained in a weakened state for several more weeks. If the CIA was required to incapacitate a person for several months, then SOD had two types of brucellosis ”...

Noteworthy история Mysteriously perished in the 1950-ies. expert in biological arms Franck Olsen, who worked closely with the CIA. The CIA itself back in 1970, as part of the reform of the ministry, reported the following. After Olsen, who was impressed by human experiments on 1953 trips to secret biological laboratories located in Norway, Britain and Germany, refused to cooperate with the secret service and decided to quit, which he reported to some colleagues. Two CIA agents added a drug to him during a business dinner, under the influence of which a scientist committed suicide a few days later. This is the official version - at one time the family of the deceased was even invited to the White House, where US President D.Ford brought her official apologies. Recently, shortly before the death of William Chavez, on the pages of The New York Times (11), this was remembered again, because in November 2012, the sons of F. Olsen brought a CIA lawsuit demanding compensation for the murder of his father ...

Summing up, it is worth noting that political harm to health and the "all-planetary cancer", as American scientists call it, can be cured only by means of surgical information intervention indicating the real culprits of political epidemics.

Ctrl Enter
Noticed a mistake Highlight text and press. Ctrl + Enter
We are
Shadow of Chavez
39 comments
Information
Dear reader, to leave comments on the publication, you must to register.