Exclusive interview of the RT Foreign Minister of Venezuela 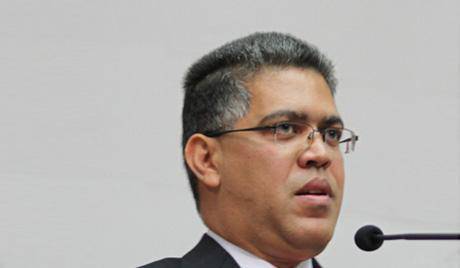 In an exclusive interview with RT, the Minister of Foreign Affairs of Venezuela, Elias Jaua, commented on such relevant topics as the relationship of the Bolivarian Republic with the United States and the recent attempt on the opposition leader Enrique Capriles. The Minister also discussed with our correspondent the statement of the Acting Head of State Nicholas Maduro on the establishment of a commission to investigate the causes of the recent death of Hugo Chávez.


Q: First of all, on behalf of our program and the entire RT, let me express my deepest condolences on the death of Hugo Chávez.

A: Thank you, Eva, we are very grateful for this to your film crew. We are grateful to all countries, all people who prayed for the recovery of President Chávez, all those who wanted to support him. And also to all those who mourn the death of Hugo Chávez today, praying, grieving ...

Q: Recently there has been a lot of talk about attempts to destabilize Venezuela. Acting President Nicolas Maduro said that the assassination attempt on Enrique Capriles, a candidate for the post of head of state from the opposition, was discovered. A few days before, two American military attaches were sent from Venezuela, who worked at the US Embassy in Caracas. They were suspected of plotting against the Venezuelan government, against the country. And now the United States responded to this by deporting two Venezuelan employees from the consulate of Venezuela in New York and the embassy in Washington. What is the likelihood that something can happen that could destabilize the situation?

A: Undoubtedly, there are attempts. But at the moment there is no way to destabilize Venezuela, with the exception of support from abroad, from the centers of world forces, as was the case in countries like Libya and Syria. But we believe that this is also unlikely, thanks to the political weight of Venezuela in the world, its position in the international arena, which Hugo Chavez won. But we must not let down our guard. The Bolivarian Revolution experienced many threats, which sometimes turned into open attacks, as in 2001-2002, with the intervention of the United States and several European countries. And therefore, when President Chavez began treatment, we, and especially Nicolas Maduro, who was in charge of the government, called for vigilance, warned all our security agencies. This allowed us to neutralize attempts to destabilize the streets, attempts to violate the provisions of the constitution. Like, for example, it was January 10, when President Chávez was tried to be dismissed at the request of the opposition bloc in parliament. They did not succeed. Chavez died as president, commander in chief of the country's armed forces. And he died a victor, undefeated. He could not be forced to leave the post, could not kill him. Could not defeat him with the help of military force. Could not win him in the presidential election. And just the day before Chavez’s death, several Venezuelan servicemen reported to the national military intelligence that two employees of the US embassy contacted them. who invited them to a meeting to discuss the “transition period”. This word, it seems, so they like, "transition." In Venezuela, there is no transition period. There is a democracy in Venezuela. With strong government institutions. With a constitution that clearly stipulates what needs to be done. In Venezuela, there will be elections, and the people will elect their president, and then, in which model of society they want to live. I am confident that the president will be Nicolas Maduro, and that he will continue the national socialist program of President Chávez. We are now witnessing opposition candidate Enrique Capriles making despair gestures in the face of the obvious defeat in the April 14 elections. He offended the family of the president, went against all the institutions of the state. This allows us to say that there are factors that are used to destabilize. But we have democratic power and political maturity to fight back and guarantee peace in our country.

Q: Relations with the United States are very tense now. Venezuela expelled US military attaches, with concrete evidence of their plans for subversive activities. The United States, for its part, expelled the Venezuelans, and, they argue, it was a retaliatory measure. At the same time, Washington continues to support opposition groups. The State Department budget for 2013 includes 4 million dollars for the opposition in Venezuela. What can be changed in the relations of the two countries, can they be improved? How can you assess the expulsion of representatives of Venezuela from the United States?

A: Like revenge. Since none of these worthy Venezuelans who worked in the United States, in the diplomatic corps, had any contact with either the US military, or the official, or the political leader. They did not try to discuss with them any “transitional period” or institutional crisis in the United States, did not try to destabilize the administration of President Barack Obama. So this is not a retaliatory measure, but simply revenge. Therefore, we condemn this step and defend the rights of our diplomats who performed their duties and their work. They did nothing illegal, unlike the American representatives in Venezuela.

Despite all this, we continue to support the line that President Chavez designated for Nicolas Maduro in November 2012 of the year.

And before that, President Chavez had already expressed his intention to normalize relations with the United States. This was, for example, in a meeting with President Obama in Trinidad. The same intention was expressed to Secretary of State Hillary Clinton at the inauguration of Brazilian President Dilma Rousseff. Venezuela wants to be on good terms with the USA. But based on certain and unchanging conditions. This is respect for our self-determination, for our national independence and for the decisions of our government that relate to domestic and foreign affairs. Based on this, Venezuela and the Bolivarian government, which is currently headed by Nicolas Maduro, continues to try to find ways to achieve this goal.

Q: When they talk about the death of Chávez, sometimes the word "murder" sounds. Nicolas Maduro announced the creation of a commission to investigate the causes of death Comandante. There was talk that his illness could have been “brought”. Oil Industry Minister Rafael Ramirez said he had no doubt that this was the case. Do you think it is possible that President Chávez was killed in this way?

A: Many doctors pointed to the atypical nature of President Chávez’s cancer. Also some scientists from different countries of the world talked about this. And we also do not deny this possibility.

And, as Maduro stated, we will create a scientific commission to investigate this type of cancer and the way in which for such a short time it led to the death of the president. AT stories there are such examples ... I know that you studied secret documents of the State Department and the CIA. And the facts about the killings of political leaders, which seemed inconceivable at the time of their death, were later disclosed and published by the special services of the leading powers of the world. And so they themselves exposed their participation in it. Therefore, we do not deny this possibility.

Q: President Chavez was undoubtedly a person who had a great influence on the world. In your opinion, what is his most important achievement?

About: For Venezuela? It is hard to say. For Venezuela, I would call one, but consisting of two parts. First, he restored the independence of Venezuela, and thanks to this, the country was able to return to the majority of citizens the rights they were deprived of. But in addition to material wealth, he made the poor have social significance. And in a global context, as I said at the UN General Assembly, he raised anew the flags of socialism and anti-capitalism - bravely, boldly, as he did in forums all over the world. Today, socialism is no longer the negative concept into which the imperial powers wanted to turn it. Today, thanks to Comandante Chávez, socialism is again a symbol of the liberation of man.

Q: RT will watch the presidential election in Venezuela, April 14. And we will be happy to meet you again.

A: Thank you, Eva. Thank you and all men and women around the world for their warm attitude towards President Chavez and our country.

Ctrl Enter
Noticed a mistake Highlight text and press. Ctrl + Enter
We are
Shadow of Chavez
13 comments
Information
Dear reader, to leave comments on the publication, you must to register.