Bashar al-Assad was killed ... on the Internet 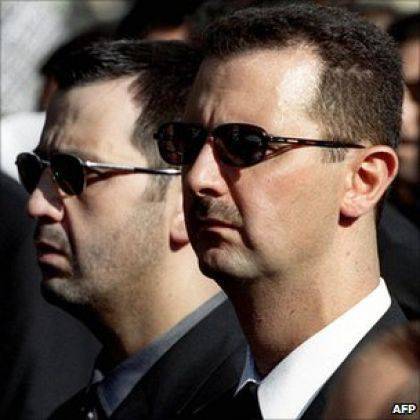 Amy Ferris-Rothman from Reuters yesterday has spread A short text on Twitter: “The network is excited. According to unconfirmed reports, Assad is dead. " These two proposals really excited the Internet. Social networks and in order to wage an information war. The West in the person of Reuters representative once again made it clear to the world whom he is going to bury. Interesting here is not the Ferris-Rothman message itself, but the way the “material” is presented in some media.

“The lone killer made several shots at point-blank in Assad,” said the source. - Assad was taken to Al-Shami Hospital in Damascus in critical condition. He died on the operating table from heart failure as a result of a large loss of blood. "

An unnamed Israeli security analyst suggests that this message may be true.

We have not seen Assad in the last 24 hours, he notes. No fresh photos or videos. The analyst believes that Iran is now trying to take control of the Syrian army and its weapons: after all, Syrian soldiers are deserting en masse. “I don’t believe,” says this specialist, “that the West will allow Iran to dominate Damascus.”

Photos of the dead Assad, the expert says, we will be able to see on the network within 48 hours. The guards, of course, had already shot his body on their phone cameras. Any of these images, according to an Israeli analyst, will cost nearly a million dollars. Western media will find that kind of money.

Newspaper "National Turk" recalls that the Free Syrian Army denies killing Bashar Assad’s bodyguard. There is a message from the influential French magazine Le Point, which writes that "comments on Twitter and Facebook helped to spread rumors to a large extent."

Meanwhile, according to the newspaper, other websites report that "Israeli and Lebanese intelligence confirm the death of the Syrian President."

The Syrian Embassy in Moscow, writes "TVNZ"called this message false. “Our president is on the spot and holds his post. This is all a lie, ”the embassy official said.

Russian diplomats in Syria also do not know anything about the death of the country's president. “As far as I know, refutations have already appeared in a number of Arabic-language media,” сообщил employee

Nevertheless, on the topic of the murder of Assad argues and the American newspaper "New York Daily News".

Correspondent Eric Ortiz writes that Bashar Assad was rumored to have been shot on Saturday, as reported by both the Arab and Israeli media. Immediately the journalist notices that the messages remain unconfirmed. Other online messages that appeared later contained references to the fact that information about the death of the Syrian leader was false and that he was alive and in high spirits. All these contradictory messages characterize the chaos that continues to absorb a country mired in a bloody civil war that has been going on for two years now, a correspondent notes.

I must say that for other Western and Israeli media "newsThe Syrian President’s Iranian bodyguard, Mehdi Jacobi, was a truly fertile ground for an offensive on the information front. All the more relevant that, as reported RBC, fighting has already gone beyond Syria. On Sunday, Israel launched a missile attack on the Syrian firing point on the Golan Heights. This was done after the Israeli military twice came under machine gun fire: on Saturday and Sunday. At the same time, the Israeli side did not disclose who was responsible for the attack - government forces or insurgents.

As for the rumors about the death of Assad, they are the purest pure pure truth. An unnamed source close to government circles in a telephone interview "RT" said: “This is not true, definitely not. The first to report this news was an Israeli website, and a shame on all news channels, newspapers and websites that replicate this news without a source. As soon as an Israeli website reported about it, they immediately picked it up. So it is ridiculous. And Assad has no Iranian bodyguard. ”

Even the head of the French Foreign Ministry, Laurent Fabius, who is ready to arm the Syrian opposition, does not believe in the death of al-Assad.

It seems that there will be no one to receive a million dollars for a shot of Assad who was shot ...

Observed and translated by Oleg Chuvakin
- especially for topwar.ru
Ctrl Enter
Noticed a mistake Highlight text and press. Ctrl + Enter
We are
Syria: Bashar Assad comes, and for that he will not be allowed to attend the Olympics in LondonSyria: Americans scare themselves, and Asma Asad buys chairs
87 comments
Ad