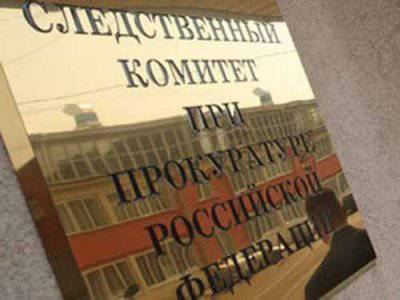 The Investigative Committee of the Russian Federation set out its view on who the outraged FSB officers are - these are just phantoms invented by journalists. SK spokesman Vladimir Markin said that there are no FSB officers who are unhappy with the release of four Chechen Interior Ministry officers from prison, as they are “fictional characters,” reportsRBC Daily".


Markin commented an article in the Novaya GazetaThe anonymous FSB officers allegedly turned to: “I just want to upset all sensation lovers. Some FSB officers who applied to the newspaper are fictional characters of the article’s article. The explanation is very simple: the FSB officers never conducted operational support of this criminal case. the case was fully carried out and is still carried out exclusively by operatives of the Ministry of Internal Affairs ". Markin’s article appeared on the TFR website.

Explanation of the Investigative Committee in connection with the publication of an article in Novaya Gazeta
25 марта 2013 года, 19: 55

In connection with the publication in the today's issue of Novaya Gazeta of the article “Moscow Yurt”, the Investigative Committee states that the investigation of the criminal case of abduction and extortion initiated by the victim Gregory was not disclosed in the interests of the investigation and the victim, but I can only say that he is the owner of the Georgian family), is carried out in strict accordance with the requirements of the criminal procedure legislation.

Just want to upset all fans of sensations. Some FSB officers who applied to the newspaper were fictional characters from the author of the article. The explanation is very simple - never have the FSB officers carried out operational support of this criminal case. Operational support in this case was fully carried out and until now exclusively by operatives of the Ministry of Internal Affairs.

As for the criminal case itself, 11 people were initially arrested on it, seven of them were charged with committing the crimes provided for by paragraphs. “A, c, d, z” h. 2. Art. 126 of the Criminal Code of the Russian Federation and p. “A, in” part 2 Art. 163 of the Criminal Code (abduction and extortion). The involvement of four of the detainees in the course of the investigation was not confirmed, so they were exempted from criminal liability. Of the seven defendants in respect of the five, the court chose a preventive measure in the form of detention.

As for the five accused police officers involved in the case. For the investigation does not matter their nationality. But what matters is that they are police officers who have committed unlawful acts. By the way, I can cite statistics: only in Moscow last year, a staff member of the internal affairs bodies of various levels was prosecuted by 174 for committing 344 crimes. And never their nationality was neither a mitigating nor an aggravating circumstance. In accordance with paragraph "h" h.1 Art. 61 of the Criminal Code of the Russian Federation a mitigating circumstance for the accused is the wrongfulness or immoral behavior of the victim. And recognized by this criminal victim was repeatedly convicted of carjacking, including real terms of imprisonment. This to some extent influenced the decision to change the preventive measure of the accused. But the main circumstance for changing the preventive measure here was the fact that the main investigative actions with the accused were carried out.

By the way, speaking of another “duck” in the article about the dismissal of the investigator in the case, I’ll grieve everyone who already happily rubbed his hands from the “lawlessness” of the leadership of the GSU in Moscow. Investigator Chingis (and not Chingiz, as the author of the article writes) back in October last year, resigned solely at his own request, and in the reasons for his dismissal he named only family circumstances.

And in conclusion I want to say that the talk about the termination of this criminal case never went and does not go. I guarantee that it will be completed and sent to court.

According to him, the investigation of the criminal case of abduction and extortion (the FSB officers were indignant because of this case), in which four Chechnya MVD officers appear, "is carried out in strict accordance with the requirements of the criminal procedure legislation." "Speech about the termination of this criminal case never went and does not go. I guarantee that it will be completed and sent to court," he promised.

On the resigned investigator, the representative of the UK stated that he left of his own accord. “Oh, by the way, speaking of one more duck in the article - about the dismissal of the investigator in the case, I’ll grieve everyone who already happily rubbed his hands from the“ lawlessness ”of the GUS administration in Moscow. Investigator Chingis Berikov back in October last year of his own free will, and in the reasons for the dismissal he called only family circumstances ", - said Markin

In Chechnya, too, denied: there was nothing like this

A spokesman for the head of Chechnya assures that Ramzan Kadyrov in Moscow in general has no guards permanently stationed in the capital, reports "Русская служба BBC“.” There were no people in Moscow sent to protect Ramzan Kadyrov and his family members. They are employees of the Ministry of Internal Affairs, they are related to the Chechen Republic, to the other republic in the form in which their leadership entrusts them. What they have to do with, find out in the Ministry of Internal Affairs ", - said the spokesman for the Chechen leader Alvi Karimov.

Recall that the officers had previously turned to Novaya Gazeta and said that they were refusing to go to the service in protest and were even ready to resign if the “gangsters armed with the Stechkins and with the certificates of the Ministry of Internal Affairs” continue walking through the streets of Moscow. According to the security officers, all of those arrested were released, and principal investigator Chingiz Berikov was fired, despite personal control of the investigation by the chairman of the Investigation Committee, Alexander Bastrykin. They also stated that they literally "spat into the soul", having released the criminals who repeatedly violated the Criminal Code of the Russian Federation.

Last week, four Chechen Interior Ministry officers, who were part of Kadyrov’s personal guard, were released. Musshaji Musulaev, Dzhambulat Mukhmatmurziev, Adam Israilov, Khozh-Akhmed Israilov were accused of kidnapping for the purpose of extortion and beating the native of Georgia. The suspects spent behind the bars a year, after which they were decided not to extend the period of detention, but to release on bail.

According to the investigation, the Chechen police officers Musshaji Musulaev, Dzhambulat Mukhmatmurziev, Adam Israilov, Khozh-Akhmed Israilov, as well as three of their friends, Akhmed Dzamikhov, Aslambek Temirov and Ibrahim Tagirov, kidnapped a victim of Georgian origin 23 August 2011 of the year in Moscow. The attackers took the man to a private house in the Moscow region, where 10-12 people beat him for several days, demanding to give them a Lexus lx 570 car. After that, they threw him on the side of the Moscow highway.

"The involvement of the four detainees during the investigation was not confirmed, so they were released from criminal responsibility. Of the seven accused of the five, the court chose a measure of restraint in the form of detention," said the representative of the UK.

Ctrl Enter
Noticed oshЫbku Highlight text and press. Ctrl + Enter
We are
Vladimir Markin responded to the "requirements" of the State Enterprise of Ukraine: "... To give them a hole from a donut, not Sharapova"Ukrainian deputies from the "Kadyrov List" have requested assistance from the special services
6 comments
Information
Dear reader, to leave comments on the publication, you must to register.