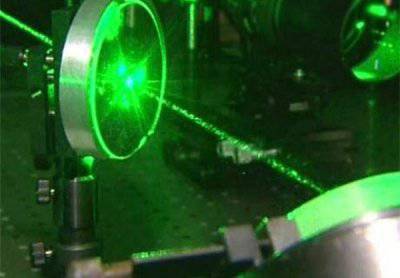 About 60 years ago, the first quantum generator was born that emitted coherent waves in the microwave range — waves that are not visible to the human eye. Such a quantum generator was named a maser, and Soviet physicists Nikolai Basov and Alexander Prokhorov took the most direct part in its creation, and through 10 years after creating the maser, they received the Nobel Prize.


The next step in the creation of quantum generators was the creation of a laser. The first letter in the word "maser" was replaced by the letter "l", which corresponded to the English version of the term "light." In other words, the laser emitted already visible waves. Today, the use of laser is truly limitless. Lasers for disco, shows and parties - This is the part that can be attributed to the entertainment industry. And there are also laser (optical disks), laser measuring devices, laser scalpels and even laser weapon.

It is believed that the first laser weapon was developed in 60-s, but it is not. Soviet scientists began their development in the military sphere in terms of the use of lasers for anti-space defense back in the 50-s. One of the first Soviet programs, the purpose of which was to create a reliable missile defense system, was launched at the end of 50's. In 60's, she began to take on her form thanks to the very same Nikolai Basov (born in the Tambov region). In 1965, the idea reached the Central Committee of the CPSU. In one of the memos it was reported that a high-power laser beam can strike the head of a ballistic missile at high altitude, thereby leveling the threat of a nuclear strike from a potential enemy.

The Central Committee took into account this possibility, and work on the creation of laser complexes in the USSR was the beginning. It was planned to create a special Balkhash test site where new weapons would be tested. The landfill was created on the territory of the Kazakh SSR. The first experimental events at the Balkhash test site were held exactly 40 years ago - in 1973 year. He planned that the main anti-satellite defense base based on the use of photodissociation lasers would be located here. At the same time, the power of such lasers could not be brought to the values ​​necessary for the destruction of ballistic missiles.

After the collapse of the USSR, work on testing laser weapons in Russia was curtailed due to lack of funds. However, in the West, such work was not only not curtailed, but, on the contrary, developed and was financed on a more substantial scale.
Ctrl Enter
Noticed a mistake Highlight text and press. Ctrl + Enter
We are
Weapons are prohibited. Part of 7. Blinding Laser WeaponUS ready to launch the introduction of laser weapons in the fleet in 2014
1 comment
Information
Dear reader, to leave comments on the publication, you must to register.