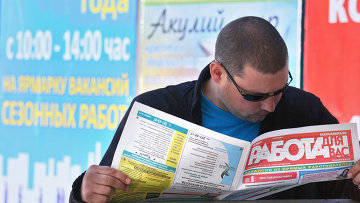 At the end of the year, the authorities published data on the 5,6% unemployment rate in Russia from the number of economically active Russians. In absolute terms, this corresponds to 4,2 millions of people. However, by the end of January 2013, the number of unemployed in Russia jumped sharply enough and reached 6% of the economically active population. Many touched layoff, many have decided to abandon their previous work. In connection with which there was an increase in the number of unemployed citizens in January?


On this account, experts have two main hypotheses. The first of these is that before the New Year comes, many Russians decided to find a job to get the funds they needed to meet a big holiday. It is rather the moment of the Russian mentality. Russians are ready to get a low-paid job only when it is absolutely necessary, but not for a long period of time. And as soon as the New Year holidays ended, more than 600 thousand people immediately abandoned these temporary jobs, striking at the Ministry of Labor’s blessed statistics.

In February, the situation improved a little. The unemployment rate fell by 0,2% and amounted to 5,5% of the same economically active citizens. People began to recover after long New Year holidays, lack of funds and began to look for work again. It should be noted that by the year 2016, the state plans to reduce the unemployment rate in the country to a historical minimum - 4,4%. If this percentage is expressed in absolute figures today, it is about 3 million people. In principle, such a project can be carried out, but for this the state will have to make substantial efforts. After all, the problems here are added by the so-called labor migrants, with the help of which employers go for obvious dumping, reducing the cost of labor. This is a serious blow to the interests of the Russians, who every day express more and more dissatisfaction with the fact that jobs are occupied by visitors from the former Soviet Republics.

Let's not forget about the president’s plans to increase the number of jobs over the next decade by 25 millions. This task looks too utopian, because the creation of such a number of jobs should begin with substantial investments in the real economy, which so far, if there is, then on a very modest scale.
Ctrl Enter
Noticed oshЫbku Highlight text and press. Ctrl + Enter
We are
Christmas gifts for children Novorossia. Part of 2. Report №13
Military Reviewin Yandex News
Military Reviewin Google News
6 comments
Information
Dear reader, to leave comments on the publication, you must to register.