Cyprus tax as a blow to Russia 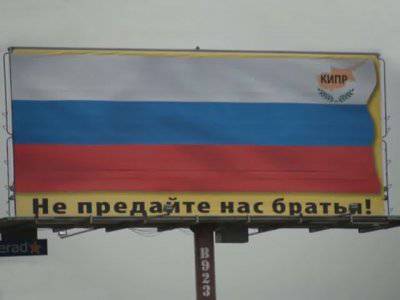 How was the decision of the European Union on Cyprus ultimatum born? This is a separate историяwhich is not completely, but at least partially became known. Post factum The so-called Eurogroup gathered in Brussels - a dozen and a half dozen EU finance ministers. They decided to discuss Cyprus and Russian money there. They didn’t call Russia and didn’t warn in advance - they weren’t going to solve anything. But suddenly, in secret from the whole world and even from their governments, the ministers with surprise for themselves wrote an ultimatum to Cyprus and immediately presented it - about confiscating deposits - otherwise no help.


That’s how the European Commission’s head Manuel Barroso describes it. When at the Moscow-Russia-European Union conference: partnership opportunities, Barroso was asked why Moscow was not informed, he replied: “Russia was not aware, because the European community — we would not talk openly about it — knew.”

If so, then the officials took an unexpected decision for themselves, not agreed with the EU countries, a decision that destroys faith in the EU banking system. In fact, the officials changed the rules as the game progressed, because deposits in the Cypriot banks of the European Union were taken according to one rules, and after a nightly decision by a handful of not the highest officials, the rules for deposits suddenly became different.

How to explain it? Preference players will understand. Sit down on the train to the south and hand over the Leningradka. Starts to carry. And suddenly at night near Rostov you are told that we are playing in “Esochinka”. According to the classics, for such - a candelabra on the head. But it is in the maps, and here - the European Union.

Awkwardly, the Europeans in Moscow tried to explain this by the sleepiness of the finance ministers gathered in Brussels.

"As Barroso correctly noted, the decision was made early in the morning - it was almost 4 in the morning hours - everyone was slightly sleepy, perhaps not fully aware of the consequences," said Wolfgang Schuessel, in 2000-2007, the Austrian Federal Chancellor.

Here Anton Pavlovich Chekhov is remembered. Remember his story "I want to sleep"? There the tired to death of the nurse - a teenage girl 13 years - in a half asleep state, not realizing herself, strangled an endlessly screaming baby in the cradle in hallucinations - if only he would shut up. "Laughing, winking and threatening the green spot with her fingers, Varka sneaks up to the cradle and leans towards the child. After strangling him, she quickly lies down on the floor, laughs for joy that she can sleep, and after a minute she is already asleep, as dead."

Well, and in Brussels, it was so? According to the ex-chancellor of Austria Schussel, so. Sleepy, they say the ministers were not fully aware of the consequences. Having slept, one must think, understand that they have muffled confidence in the banking system of the European Union.

“It seems to me that it’s not quite wise,” Schüssel admitted. “Perhaps we need to somehow reconsider the approach to making such decisions.”
One way or another, today the world is already in a new situation. And Russia is also in it - with all its minuses and pluses.

By the way, there are pluses: Russian capital will obviously be looking for more reliable and stable jurisdictions. Perhaps it makes sense to go back home.
Champagne poured into the river and his eyes were misty slightly - five years ago, Cyprus was noisy celebrating its entry into the Eurozone. And now it turns out that it would be better not to enter.

The first bell rang last November, when the German intelligence agency BND shared a secret report with Spiegel magazine: Cyprus is on the verge of default, but you don’t need to save it, because Russian oligarchs will get it - more precisely, some 80 oligarchs who use Cyprus as European newspapers were mocked as a Trojan donkey for getting into the European Union. Merkel was accustomed to trusting her spies, and besides, soon elections. But the Russians will not get poorer anyway.

“Germany’s role in all of Cyprus’s history is extremely important. The fact that, after the initial, relatively mild proposal was rejected, Germany is pushing even tougher measures, says that we are dealing with a geopolitical crisis in relations between Berlin and Moscow, and Moscow and Washington, in which Europe and Germany play only the role of transmission links. The decision of the Eurozone finance ministers and IMF officials to illegally withdraw deposits from the main banks of Cyprus was a carefully thought out, albeit seemingly Good decision.

The goal of these actions is to strike at Russia and its interests in Europe, ”said William Engdahl, an economist and author of the book Gods of Money.

If so, then it is understandable why the calmest person last week was the head of the US Federal Reserve Board, Ben Bernanke. “We are closely following the situation in Cyprus, but we see no risks for the American financial system or for the American economy,” he said.

“Bernanke’s cold-blooded reaction is related to the role that the IMF plays in this crisis. In reality, the IMF is an appendage of the American treasury. Bernanke is clearly watching what is happening in Cyprus not without pleasure,” says William Engdal.

The main damage is not even the withdrawal of deposits, but the freezing of the activity of companies registered in Cyprus, if the ban on all monetary transactions is indeed introduced. Is it good to be offshore? Probably bad. But what if all your competitors have one foot there - they are avoiding taxes, reducing costs?

According to The Wall Street Journal, 60 of the largest American companies in the past year brought 166 billions of dollars or 40% offshore to offshore companies. General Electric, Microsoft, Apple, Pfizer. Bahamas, Virgin Islands, Puerto Rico. Almost half of foreign direct investment in the economy of India falls on the island of Mauritius. There is a Cyprus, and Brazil, and China. This is called “capital outflow”, and Russian companies play by the general rules. Now it turns out that even in these rules an exception is made for them.

“The first lesson we need to learn from Cyprus’s history is that we cannot blindly trust what the IMF’s offer to us or impose on the G8. Everyone has their own interests,” said Sergei Glazyev, presidential adviser to the Russian Federation. .

If the restaurant serves borsch, it does not mean that you are in Russia. From the 1877 year, when the great powers were just beginning to struggle for the Turkish inheritance in the Mediterranean, to the 1960 Cyprus - the British protectorate. However, he did not cease to be after the declaration of independence. There are still two British military bases and a large US-British Center for Electronic Intelligence, tied to the global system Echelon.
When a scandal broke out in 2009 with the detention of the Monchegorsk ship by the Americans, allegedly transporting ammunition from Iran to Syria, Hillary Clinton convinced Cyprus to take the arrested cargo for inspection and storage with a single phone call.

In 2011, 98 containers with explosives mysteriously blew into the air, and with them the career of the then president. From the point of view of logistics, no war in the Middle East is complete without Cyprus. This is really a safe haven.

In chess, this is called zugzwang - each next step only complicates the situation. To this, apparently, the calculation was made. It is extremely inconvenient to defend the Russian residents of Cyprus, who can hardly hope for the sympathetic attitude of the majority of their fellow citizens, although they warned: "You will torture the dust to swallow." On the other hand, one can silently observe how one is “swallowed”, it is also impossible: at stake is not private savings, but the reputation of the state and, most importantly, its interests in a critical region.

The most important thing is that all this is being done under the slogan: “Doing this with the Russians is not only possible, but it should,” because they are barbarians, gangsters, thieves, obscurantists, homophobes and who else. All in accordance with the famous thesis: "The new world order will be created against Russia, at the expense of Russia, on the ruins of Russia." What other humiliations must a domestic entrepreneur go through in order to part with illusions?
One of the bars in the center of the city of Paphos in the evenings is filled with not pathos people. Where else can you see purebred English dancing under Pugachev? The co-owner of the institution, David to the Russians, has the most tender feelings. True, he keeps all his money in England, but he still experiences.

“This is a planned action directed against the Russians,” David said. “If you look who should suffer the most, it will be clear that the Russians are not. The Cypriots, not the English are Russians. And I’m sure that this is a deliberate political blow from the European Union This is not a tax - it is theft, theft! "

Ctrl Enter
Noticed oshЫbku Highlight text and press. Ctrl + Enter
We are
What you didn't want to know about EnglandList of destroyed the largest and most high-tech enterprises
Military Reviewin Yandex News
Military Reviewin Google News
82 comments
Information
Dear reader, to leave comments on the publication, you must to register.