April 1 2013
5
Drawn me lately on the old ... Just on the old. In a previous article was described rifle graswhich replaced in the french army weapon under the paper cartridge and, actually, the era of cartridges in a metal sleeve began in France. At this time, we consider an even more ancient sample with a flintlock. I know that such a weapon may seem boring and completely uninteresting, but if that were the case, then I would not have written an article about it. This sample, or rather the idea itself, since such a solution was used in a wide variety of weapon models and even found use when a cartridge with a metal sleeve appeared, but more on that a little later, allowed us to multiply the rate of fire of the weapon, and therefore make it more efficient. in the hands of a soldier. At the same time, the idea itself was the simplest and only its implementation in those times was rather difficult, which did not allow such weapons to spread everywhere. It's about the Lorenzoni system. 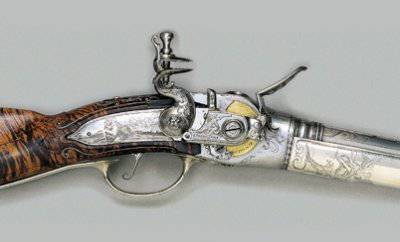 Flintlock guns in itself are very interesting and beautiful weapons, which existed for quite a long time, but one of its main drawbacks was that it was unable to shoot fast enough. 4 shots per minute, this is such a “huge rate of fire of most samples. Moreover, if we add that the accuracy and efficiency of the hit was, to put it mildly, not very much, then there is nothing surprising that the designers, possessing even the minimum supply of opportunities that they had, were looking for a way out and tried to create a more accurate, rapid-fire "killer" weapon One of these designers was Michele Lorenzoni, who lived in Italy in the 17th century.

The main focus of the gunsmith was to create weapons that could shoot with a higher rate of fire, but the designer did not even look towards solving this problem by increasing the number of barrels or other methods that were simply unacceptable. After all, even be a hundred barrels in a rifle, after they all fired, all these barrels needed to be charged. The main goal of the designer was to maintain the size and weight of the weapon, while he wanted to achieve a rate of fire down to 15-20 rounds per minute. The task would seem impossible, but there is no limit to human genius and the designer has set a goal set for himself. 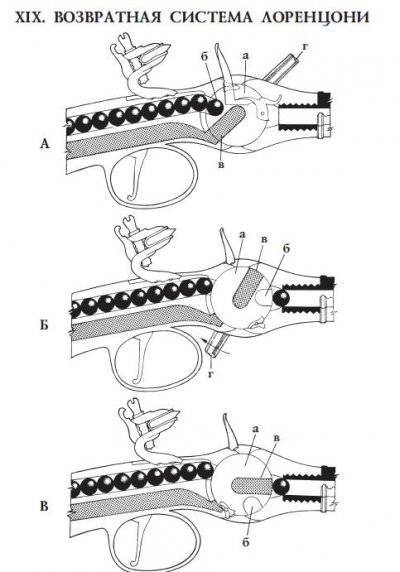 Since the main condition was the creation of a weapon that would not stand out for its dimensions and weight, or at least did it slightly, the designer began to look for what was used in the weapon "empty" and found. The “extra” part turned out to be a pistol grip and a butt. Actually, this designer was pushed into this by what many gunsmiths did in the butts and arms of the pistols of the compartment for storing gunpowder and bullets. The gunsmith managed to develop this idea further, and he began with pistols.

In the grip of the weapon two channels were made, in one of which the bullets themselves were placed, in the other gunpowder. Between these channels and the barrel of the weapon there was a rotating part with a handle in which two indentations were made, one for the bullet, the other for gunpowder. So, after the shot, to reload the weapon, it was necessary to tilt the weapon forward, holding the handle to turn it around its axis, first in one direction, grabbing the bullet, and then in the other direction, while the bullet “fell out” into the barrel of the weapon. Bringing the handle up to the stop, when turning in the opposite direction, gunpowder was poured into the second recess in the rotating part, after which the handle returned to its place and a shot could be fired. Subsequently, the designer made the filing of a bullet and gunpowder at the same time, so it was necessary to simply turn the handle and return it to its original position. With a fairly good training, we got a real machine gun for those times. Realizing what he had done, Lorenzoni hurried to apply his innovations to rifles as well, and forever introduced his name to history.

However, not everything was so smooth with weapons. The gunpowder in the handle or the butt of the ignition in one case could completely tear off the hand, while in the other it could kill the person. The designer understood that such an arrangement of gunpowder was dangerous, but did not want to change anything, and it was difficult while maintaining the weight and dimensions of the weapon. However, even if the gunsmith had transferred both a powder charge and bullets under the barrel, then in the pistols this could be and would be acceptable, but in the long-barreled weapon the problem would remain, since it is held when firing with both hands. The solution to the problem of ignition of gunpowder in the butt or handle of the weapon was that the details of the design were fitted with very high accuracy, which was surprising for that time. The creation of such a sample of weapons did not take hours, but days, and this with well-established production. As a result, the weapon acquired the status of elite, and did not receive widespread distribution in the army. However, it suited the designer quite well, they used his weapon and paid him money, and a lot of it. Well, how many such samples are now, then even the numbers are terrible to call. 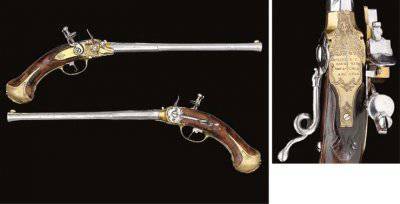 In spite of the fact that the idea was little spread in its time, it was actively used in the future. I have repeatedly seen when the seemingly single-shot rifle had a description of the multiply-charged one, and only when a handle was visible that was similar to the one that was on the flint pistols everything fell into place. The gun shop was just located in the butt.

Even the rotating part itself, supplying bullets and gunpowder, found new life even in modern models, for example, the P90 submachine gun, which was recently talked about, with not the most traditional store layout, or you can take the G11 with an even closer design. In general, I have repeatedly said, but I repeat once again. When in the description of the weapon there are words “there are no analogues in the world”, then it is worth paying attention to samples of the late nineteenth and early twentieth century or even older, as in this case, and there are immediately analogues. Let them not exactly repeat the new model, but the idea itself once was, after all, not for one century humanity lives. In general, modern designers have such an extensive knowledge base that they don’t need to invent anything, you just have to dig deeper into the backyards of history, and you can make inventions every day, adapting them to modern requirements and improving modern capabilities. 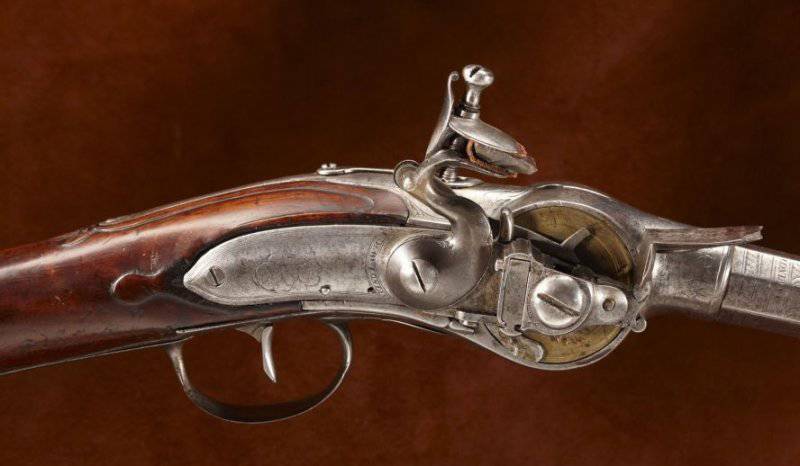 Ctrl Enter
Noticed a mistake Highlight text and press. Ctrl + Enter
We are
Flint Lock Musketon Gun from the Beginning of the Century 18Basile Gras Single Shot Rifle
5 comments
Information
Dear reader, to leave comments on the publication, you must to register.