March 29 2013
17
In the comments to the article about gun Five-seveN the pistol produced by Heckler & Koch P9 was mentioned as another sample with a semi-free breech automatic mechanism. Short-barreled weapon with a similar automation system, despite clear advantages in the form of higher accuracy when shooting and the possibility of significantly reducing weight without increasing recoil, it could not yet win the pistol market, and there are still samples with short-stroke automatics that are still among the leaders. This is not accidental, since the production of a semi-free-shutter weapon requires much more effort from the designers, rather than launching the next “stamping” with a short barrel stroke into the series. Let's try to get acquainted in more detail with the P9 pistol, as well as its version with the P9S dual-action trigger mechanism. 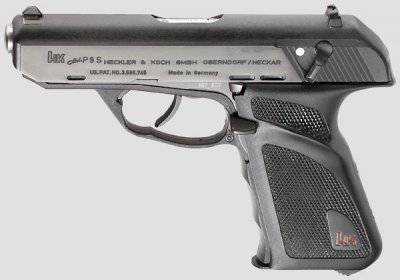 The release of these pistols was adjusted in the 1969 year, although the gun was developed in the 1965. Turned off the production of both versions of the weapon in the 1978 year, as the weapon turned out to be too expensive to manufacture, with not the highest advantages in comparison with other samples built according to the scheme with a short barrel stroke. Actually the fact that a semi-free-shutter weapon is superior in accuracy to samples with a short barrel stroke in accuracy, but too expensive to manufacture, it still remains the main reason for the small proliferation of such pistols. Well, people do not want to be able to shoot a squirrel in the eye at distances up to 50 meters, it is simply not necessary in most cases. By the way, not everyone needs it; some people prefer to have a good accuracy potential even with short-barreled weapons. So still P9S produced in Greece, but under the name ER9S. Naturally, the weapon is not made in its original form, but with some changes, but the essence remains the same.

You should start with the appearance of the gun. In general, the weapon does not stand out externally with anything special, and is a completely familiar pattern of 60-70-s of the last century. The only thing that attracts attention is the abundance of all kinds of protrusions and deflections of the weapon frame. On the left side of the housing-bolt has a fuse switch, which in its lower position makes the weapon completely safe. 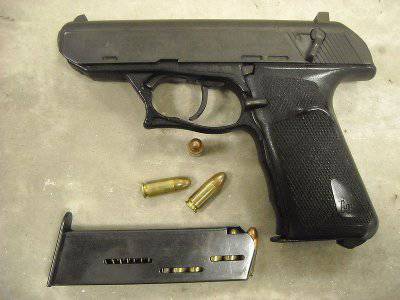 Sights gun simple open, consist of unregulated rear sight and front sight. The pistol magazine is not fixed with a button, like most modern models, at the junction of the safety bracket to the handle, but with a spring-loaded latch at the bottom of the handle. The handle itself has small projections under the fingers of the arrow, which are barely noticeable, but allow you to more confidently hold the weapon in your hand. Before the trigger, you can notice a small key, when you press it, you can remove the casing-bolt pistol and make cleaning. The most interesting detail, which is not immediately notice, is a small lever passing under the left cheek of the handle and looking in front of it. This lever is connected to the trigger. When it is pressed, the trigger can be cocked and, if held, you can make a smooth descent without touching the shutter of the weapon. The solution is interesting, but you can find out how convenient it is only by getting a weapon in your hand, so it’s hard to judge.

Of course, the main feature is the automatic weapons. As mentioned above, the automatics is built according to the semi-free-bolt scheme; a pair of rollers prevents it from becoming free. When fired, these rollers retard the movement of the bolt back entering the notches of the barrel coupling, however after the bullet leaves the barrel and the pressure of the powder gases starts to decrease trigger mechanism. 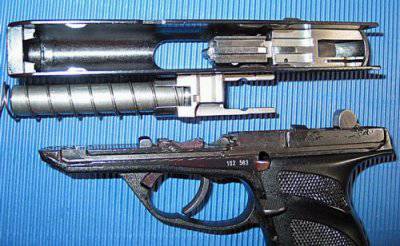 Such an automation system makes it possible to use sufficiently powerful ammunition in the weapon, while the barrel of the weapon remains stationary at the time of the shot, which leads to a significant increase in the accuracy of the weapon. Standardly, the gun was fed with 9x19 cartridges, but there was an option for the .45ACP cartridges, which were planned to be sold in the US market.

The device was fed from detachable single-row box stores with a capacity of 9 cartridges 9x19 or 7 cartridges .45ACP. The mass of the weapon was equal to 880 grams, while the length of the gun was 192 millimeters. Another feature of the weapon was its barrel. The fact is that the barrels of РХNUMX and Р9S pistols did not have rifling in the usual sense of the word, but had a polygonal rifling. Roughly speaking, such cutting of the trunk resembles a twisted prism. The advantages of such a design of the weapon barrel are that it is more durable, it is better and quicker to get rid of soot, and also gives an increase, albeit a slight one, to the speed of the bullet. In addition, the failure of the bullet from the rifling is completely excluded. In fact, there were quite a few samples with such a barrel, and many of them are fairly well known.

For example, the gun "Desert Eagle" boasts such a trunk, although sometimes you can find trunks with classic rifling. By the way, about the classics. No matter how paradoxical it may be, but it is the polygonal rifling of the barrel that is older, and the first versions of the silicon rifle rifles were precisely with such a barrel. The bullets represented them just these very twisted prisms, that is, the bullet did not deform when fired, taking the shape of a barrel, but was already prepared for it in advance, so you can still argue which version of barrel cutting is classic.

Unfortunately, the weapon was not widely spread and the reason was in the price of the “issue”. In addition, there was too little noticeable advantage of these pistols over other common models and only a few could unleash the full potential of this weapon. Having come to the conclusion that the person with the 50-100 meters comes across quite well from other pistols they refused this weapon, but as we already know, not everywhere. Nothing can be done, even the most accurate weapon will not be able to compensate for the inability to handle it, congenital curvature and squint. 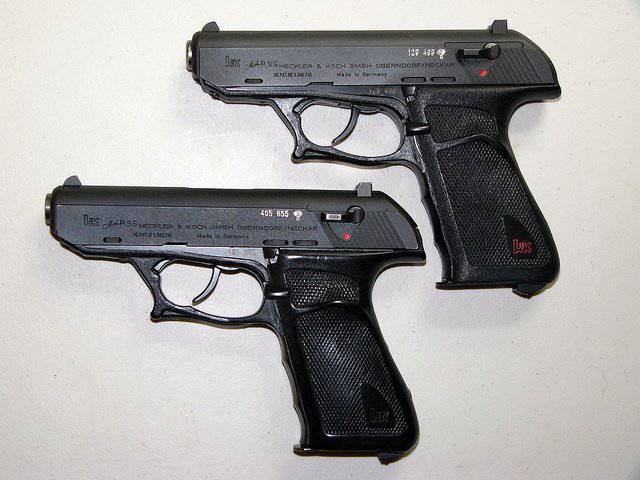 Ctrl Enter
Noticed a mistake Highlight text and press. Ctrl + Enter
We are
Five-seveN pistol chambered for 5,7x28Heckler & koch usp
17 comments
Information
Dear reader, to leave comments on the publication, you must to register.