March 26 2013
57
Weaponpossessing the properties of several samples at once, it was an old dream of both gunsmiths and the military. A vivid example of this can be Browning Machine Gun M2, which was used not only as a large-caliber machine gun, but also a sniper rifle. However, the example may not be the most successful, because at that time there was simply no weapon that could hit long-range targets with high accuracy, so they used everything that was at hand. In the same article we will try to make out a really interesting and to some extent universal weapon that appeared during World War II, though it appeared in the hands of the enemy, but this is not so important. This is a model of handguns named FG-42.

This sample, for some unknown reason, is attributed to automatic rifles or automatic rifles. And although the dimensions of the weapon really make it possible to call it that, but the ammunition that is used in it makes it possible to say with confidence that it is a light machine gun. The idea of ​​creating such weapons was born in the 1941 year, during Operation Mercury, during which the fascist troops were to seize the island of Crete. The main emphasis was then placed on the landing forces, however, the design of the parachutes was such that it was problematic to take with them something other than a light submachine gun with a limited supply of ammunition, and there was a risk of preventing the parachute from opening. Thus, the paratrooper landed practically unarmed, all the other weapons were dropped on a parachute separately and the calculation was that during 80 seconds after landing, everyone had to re-equip, which was very problematic, as not only had to land alive, and under enemy fire try to search for something. In general, the task was almost impossible, and the losses were very high.

Naturally, the losses were unacceptable, because it was necessary to change something. They approached the problem globally and not only did they decide to change the design of parachutes, they also decided to develop a new weapon for the paratroopers. That was how the specification for the new weapons was formed. The terms of reference included the following key points that were mandatory. So the main conditions were the use of the cartridge 7,92х57, the ability to conduct both automatic and single fire, while it was required that a single fire be fired from a closed bolt, to increase the accuracy of the weapon, and automatic from an open one. All this had to fit in compact dimensions and weight, so that the paratrooper could take this weapon with him. Such requirements, even by modern standards, are quite complex, and then they seemed to be impracticable at all, however, they coped with the task. A team of designers under the leadership of Louis Stange successfully did the impossible and already in April 1942, a new model of weapons was presented for testing. This sample had the designation C. According to the plan, this sample was to go into mass production immediately after the tests, which ended in June 1942, but the tests were carried out by the Luftwaffe, because another weapon tests were assigned, during which a lot of shortcomings were already identified . For what additional tests were carried out is unknown, but it can be assumed that it could not have done without outside help, since the weapon could give a significant superiority in the battle of the German army, and even before the infantry the options were within reach. So there were options for weapons E and F, however, these samples have never been mass-produced. As proof that the permanent failures of mass production of weapons were not accidental, it is possible to mention the fact that in 1943 year, and more specifically 12 of May, this weapon was used for the first time quite successfully, and the weapon was with the letter D in the name. So this weapon was obtained, roughly speaking, from under the floor in the amount of 50 pieces and proved to be excellent in battle with the British. After such a success, it was decided to immediately send the weapon into mass production, however, production was established only in August 1944 of the year, as a result, a sample appeared with the letter G in the name.

At this time, the design of the weapon really underwent a proper processing with a reasonable approach. First of all, the shutter of the weapon was used to reduce the rate of fire from 900 to 700 shots per minute. Changed the angle of the handle of the weapon, which until then had been convenient for holding the weapon when it was worn and when firing “from the belt”, but not for accurate fire. The trigger mechanism has become completely removable and interchangeable between the arms. Fire translator switches and fuses are separate controls. Well, a lot of changes, the main purpose of which was to reduce recoil when firing, after all, the cartridge used in the device was not for children. So one of such changes was the muzzle brake-compensator of recoil, its gaps were directed upwards, therefore it was necessary to make aiming devices higher so that the shooter is not just blind. Provided that the weapon required minimum dimensions and a minimum of protruding parts, the open sights were made folding. In addition, the weapon could be equipped with light bipods and a telescopic sight, as a result of which, in terms of combat effectiveness, the device approached sniper rifles, naturally did not reach out and could not fully replace, but with a bezrybe ... 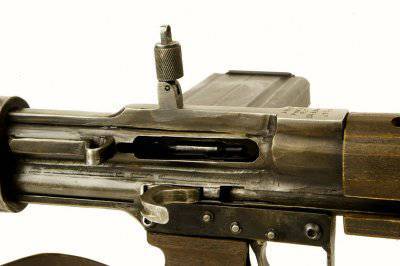 Automatic weapons built according to the scheme with the removal of powder gases from the barrel with a long piston stroke. The barrel is locked when the bolt is turned to two lugs. The weapon used a lot of solutions aimed at reducing recoil when shooting, but the most interesting, in my opinion, is the design of the chamber, thanks to which the recoil is also reduced when shooting. The fact is that a metal was chosen near the neck of the cartridge case in the chamber, as a result of which the cartridge “unfastened” when fired, trying to take the form of the chamber. Thus, the sleeve becomes much more difficult to remove, thereby reducing the speed of movement of the moving parts of automation. Cheap, original, effective.

The final weapon had a total length of 1060 millimeters. The length of the barrel is 525 millimeters, the weight of the weapon is slightly more than 5 kilogram. It feeds weapons from detachable box stores with a capacity of 10 and 20 cartridges, although it is said that there were stores with a capacity of 60 cartridges, but landing with them in the weapon was difficult.

This weapon was produced in very small quantities due to the defeat of Germany. The first versions of weapons in total were released in the amount of about 2000 weapons, while the final version was released in the amount of 5000. After the victory, few people were interested in this weapon, as well as the general concept of everything in one, all forces were concentrated on the creation of the machine gun, but it is not difficult to notice the common features of the FG-42 and the American M60 machine gun. In itself, the idea of ​​creating a weapon that would combine the properties of several classes does not seem to me to be very good - well, it is impossible to make everything perfect and that the result could replace other samples of different purposes. Nevertheless, provided that it would be necessary to parachute from the air with the weapon and immediately join the battle, such a sample is simply necessary, of course, provided that nobody heard about the intermediate cartridge and machine gun. In general, after World War II, few people became interested in weapons and it was abandoned. Abandoned, but not forgotten. 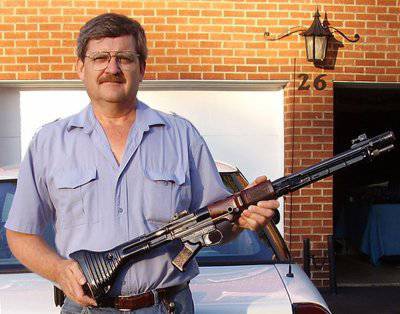 Most recently, in Texas, the arms company SMG Guns decided to revive this type of weapon, but only for the civilian market, that is, the possibility of automatic fire can not be expected. The weapon completely repeats the last sample of the weapon and even feeds on the same 7,92x57 cartridges. The weapon is naturally made completely from scratch, because some differences from the original are inevitable. Representatives of the company are positioning this model, first of all, as a weapon for the collection, understanding that the practical use of such weapons is not the best, and it cannot compete with modern samples. In general, the apparatus was revived, at least in part, and the opportunity arose to “touch” it at least in this form, but I want to do it very well.

Ctrl Enter
Noticed oshЫbku Highlight text and press. Ctrl + Enter
We are
Berthier rifle - a rifle for the Zouav and all the restBrowning Heavy Machine Gun M2 and his successors
Military Reviewin Yandex News
Military Reviewin Google News
57 comments
Information
Dear reader, to leave comments on the publication, you must to register.