March 25 2013
7
At the end of the 1940-ies, at the beginning of the era of jet aircraft, F-89 Scorpion was created. The aircraft before the 1969 year provided the US air defense, outliving many of its contemporaries. Initially, the design of the aircraft almost did not change, but its weapons have changed - the guns replaced the guided and unguided missiles, as well as missiles with a nuclear warhead.


By the end of the Second World War, Northrop specialists had experience in developing and creating the most advanced areas of military aviation: radar installations and jet engines. It was here that the first interceptor with the P-61 locator “Black Widow” (“Black Widow”), commissioned by the US Air Force, was created. The company’s first turbojet aircraft was the experimental XP-79B. It is only natural that the designers of Northrop took part in the US Air Force competition when they needed the latest interceptor equipped with a radar.

After the war, the US Air Force required a new aircraft. Requirements for the new all-weather fighter were put forward on 28 August 1945. The machine was supposed to have the maximum speed of the aircraft at the ground 885 km / h, at the height of 10,7 km - 845 km / h. The time taken to set the maximum height was set in 12 min., The range - 967 km. Also, the machine except small arms had to be equipped with air-to-air missiles. Initially, the specification did not imply the use of a jet engine, but most of the six companies submitted to the competition - Consolidated, Bell, Douglas, Curtiss, Northrop and Goodyear - fighters were equipped with just such engines.

The firm "Curtiss" was in a more advantageous position, as it had the option of a heavy fighter XA-43. Designing this aircraft began during the Second World War. At the end of hostilities, the military changed their view of the XA-43, and the designers decided to create a new interceptor at its base. The XP-87 aircraft project was ready at the end of 1945, when the rest of the companies just started developing sketches for their cars.

On the "Northrop" developed 4 version of the aircraft. The Air Force Commission in March 1946 of the year chose to build one. The interceptor at the company received the designation N-24, and in accordance with the US Air Force system he was assigned the index XP-69 and the proper name "Scorpion".

13 June 1946. The company signed an agreement to build 2 prototypes of XP-89 (the first of them was flown around in August 1948 g). The final contract was concluded in September of the following year. During the preparation of the project in the project made several changes that increase the cost of work.
In 1948, the United States Air Force was reorganized, all interceptors were categorized as “F” (Fighter), and the project was designated the XF-89 “Scorpion”.

Interceptor was supposed to "work" on the Soviet bomber. Ocean - reliable protection from enemy aircraft. At that time, the only corridor to the United States, for Soviet aircraft, was the Alaska area. In this regard, the new fighter immediately designed for the harsh and snowy North. The interceptor required greater reliability and simplicity in control, which affected the aerodynamic design - only the use of a straight wing ensured confident piloting and landing at night and in adverse weather conditions. 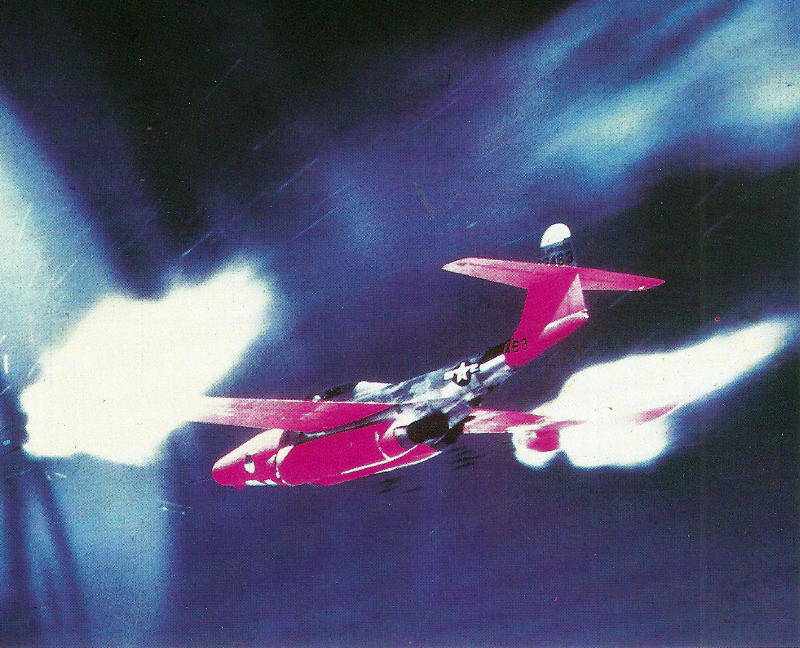 After the Genie missile with a nuclear warhead, the Scorpion’s most powerful weapons were the 70-mm NAR Mighty Mouse. Released from close range in one gulp, 104 rockets created a huge cloud of solid destruction in the sky.

Scorpion was initially created, if it can be said so, around the four-guns nose-propelled rifle system, which is clearly visible in the shape of the nose of the XF-89 prototype. But the second prototype then installed a fixed installation of six guns

F-89B from the 190 th fighter-interceptor squadron received one of the most impressive color schemes. Idaho Squadron flew F-89B from July 7 956 to April 1959

54-26 The 7 is the first F-89H captured during the tests of the air-to-air GAR-1 Falcon unit. The missiles were housed in a closed unit, and before launching they were put forward on an aviation launch device. The solid propellant rocket engine worked with 1,2, providing the rocket with a speed of M = 3,15 and a maximum launch range of 12,2 km

The all-metal semi-monocoque fuselage had a working skin. The front two-wheel post, placed behind the air intake cut, was removed under the cab, and the single-wheel main landing gear (high pressure pneumatic) in a single wheel - in the wing. The straight wing (profile NACA 0009-64) served to accommodate the fuel tanks and had five spars. Also, the fuel was in the fuselage. It was planned that non-dropable extra tanks would be installed at the wingtips, but they were absent on the first car. Due to the supply of fuel, the standard combat radius of the F-89 Scorpion was 500 km, however, for the interception of important targets, the range could be increased to 1000 km.

The plane decided to use the new steering surfaces - elevons (at the same time playing the role of brake plates and ailerons), tested on the XP-79В. According to the designers, such steering surfaces will enable the aircraft to maneuver more efficiently, facilitate target acquisition, aiming and shooting. But the first copy was supposed to fly around with classical ailerons, and only then go to the elevons.
The fighter-interceptor used the usual tail. The stabilizers were located just above the middle of the keel, to protect them from the gases emitted from the engine. 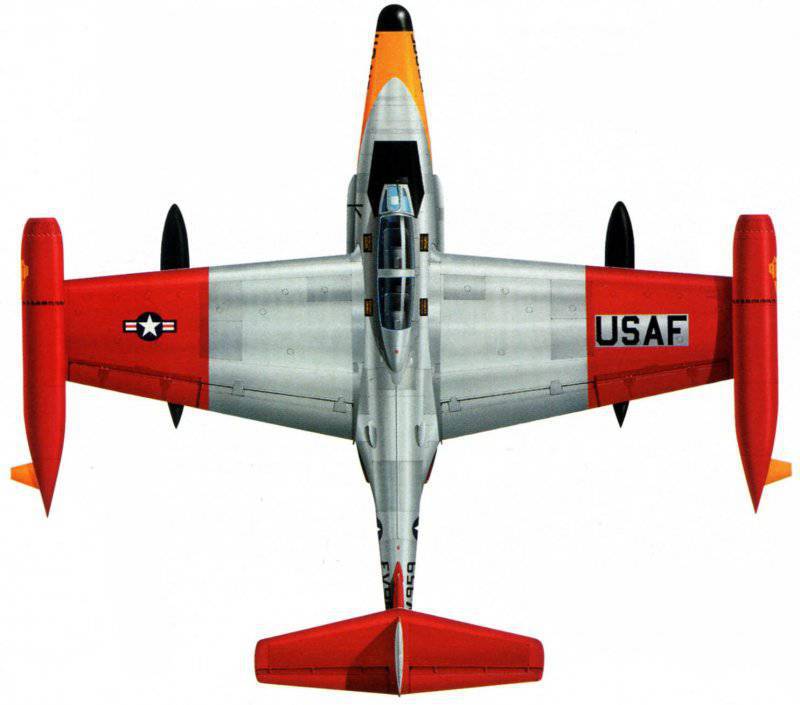 The sealed cabin had a common flashlight for the pilot and operator located on the ejection seats one after another.

On the first prototype, the XF-89 installed the J35-A-9 engines from Allison, which obtained documentation for the production of these turbojet engines. The maximum J35-A-9 thrust was 1814 kgf. The engine for a long time could develop effort only in 1588 kgf. It was clear that power was insufficient, since the take-off mass of the aircraft in the project was equal to 16 tons. In this regard, for subsequent interceptors, Chrysler was chosen by the General Electric J-35-GE-3 license 1814 kgf as a power plant. Two engines were placed below the fuselage near each other. Unregulated air intakes were almost at the ground, and the nozzles were at the rear edge of the wing. The tail section with plumage from escaping gases was protected by special steel heat-resistant plates. With this arrangement, the need for long air ducts fell away - the free nose was used to house the radar, and on the ground, servicing the engines was very affordable and simple. The only drawback of this scheme was the danger of getting into the engines of objects with runways.
In addition to intercepting aerial targets, the aircraft was to perform the functions of a ground attack aircraft. Therefore, the F-89A, in addition to the 6 M-24 cannons, received the 2 wing pylon. If necessary, they were suspended bombs weighing 726 kg. Under the wing also placed the guides for the 16 NUR HVAR caliber 127 millimeters. Even before the advent of supersonic interceptors replacing the F-89, the designers of Northrop worked on equipping the Scorpion with a wide variety of equipment and weapons. One F-89A was tested with the new MX-852 turret. In this setup, four X-NUMX-mm M-20 guns could deviate 24 degrees from the horizontal position. At the same time, the new D-150 fire control system and the AN / APG-1 radar were tested. Two aircraft modification F-29C flew with X-NUMX-mm guns Oerlikon which replaced six 89-mm trunks. In the 30, on one F-20C instead of the standard rifle armament, a pair of T-XNUMHEZ jet cannons mounted on the sides of the nose were installed. These guns fired special 1952-mm missiles, general 89 rounds of shots. 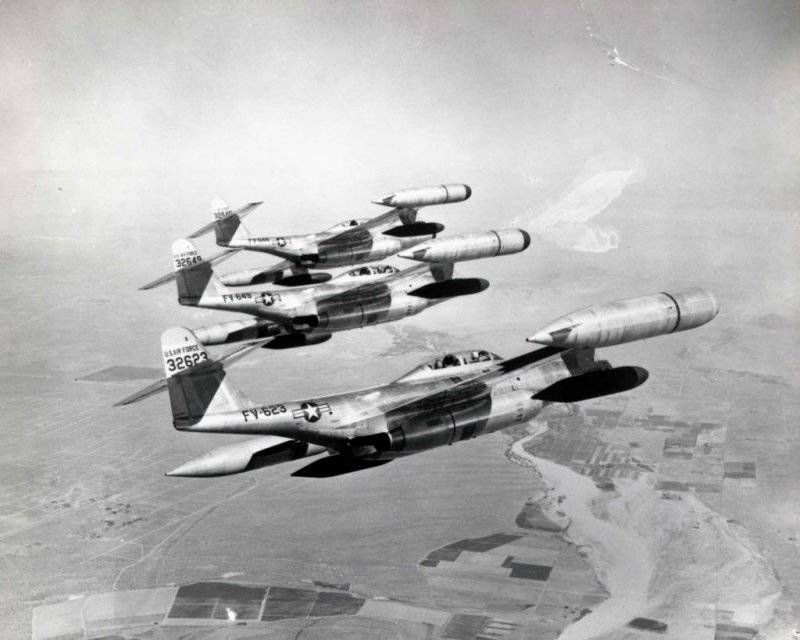 F-89A - the first serial modification of the aircraft. Production began in 1950. On the first machines, the Allison J33-A-21 engine was installed, replaced later by J33-A-21А (thrust from the afterburner 22,58 kH). 18 machines were produced. 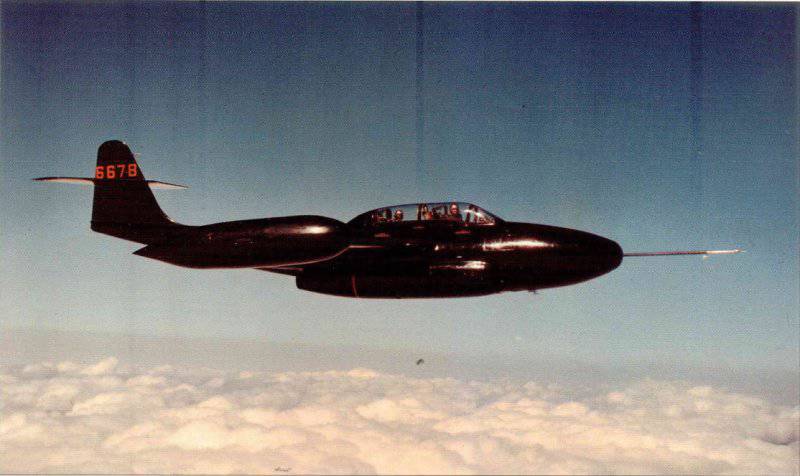 F-89B - on the machines of this modification changed the composition of avionics, which included the instrumental landing system and the autopilot Lear. Built 30 machines. 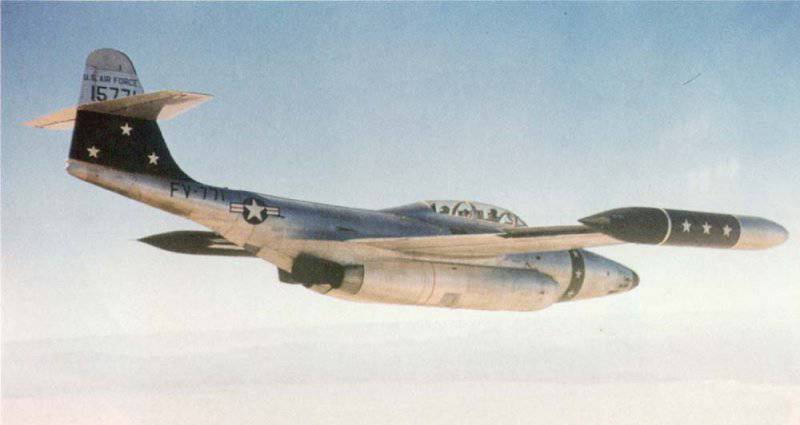 F-89C - changed the composition of avionics and horizontal tail. On airplanes of this modification, various versions of the Allison TRDF were installed. Total built 164 aircraft. 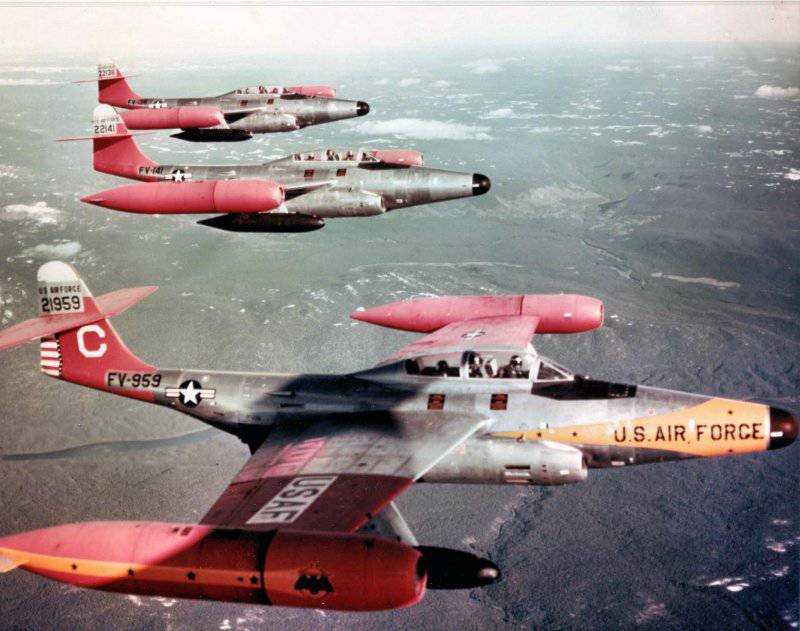 F-89D - the most massive modification of the aircraft - built 682 aircraft. Entered into service in 1953 year. On the F-89D, a new Hughes production control system was installed, six 20 caliber guns were dismantled, and it was possible to install underwing fuel tanks, as well as end wing containers with 52 HAP each.

YF-89E - the only created instance was equipped with an Allison YJ71 engine. The series was supposed to go under the designation F-89F, but the work on this version turned.

A similar fate befell the modification of the F-89G equipped with a new SLA.

The F-89H is the latest production version of the Scorpion. In production launched in 1956 year. This modification is close to the F-89D, but differed by more powerful engines. On machines, the F-89H was equipped with end wing containers for 3-3 air-to-air Falcon guided missiles and 21-th NAR, and 6 guided missiles were also suspended under the wing. Built 158 machines. 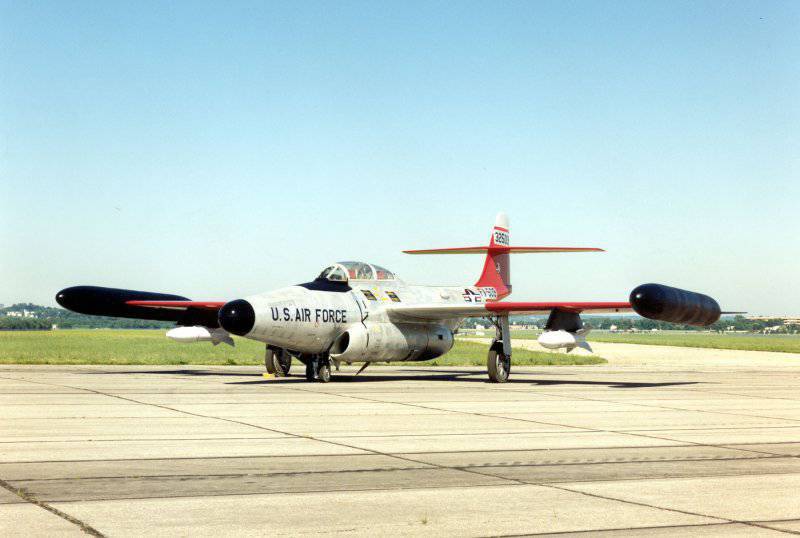