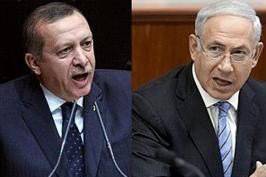 Israel Turkey
The Office of the Israeli Prime Minister Benjamin Netanyahu announced the normalization of relations between Israel and Turkey has begun. According to Netanyahu, he had a telephone conversation with Turkish Prime Minister Erdogan and expressed regret over the deaths of nine pro-Palestinian activists-Turks on ships flotilla freedoms that were aimed at breaking through the blockade of the Gaza Strip.


Israeli Prime Minister also agreed to pay compensation to the families of the victims.
It should be noted that this conversation took place in the presence of US President Barack Obama (according to Davutoglu). The normalization of relations also includes the return of ambassadors and the recall of citizens against lawsuits by the Israeli military.

Turkish Foreign Minister A. Davutoglu in an interview with TRT channel told additional details of the reconciliation of Israel and Turkey. The minister told about the calls of Erdogan to the head of the State of Palestine Abu Mazen (Mahmoud Abbas) and the head of the Hamas government in Gaza Ismail Haniyeh, in which he asked for permission to accept the apology of Israel. It was after these calls that a telephone conversation took place between Netanyahu and Erdogan, after which Netanyahu handed the phone to B. Obama.

According to Davutoglu, the apology became possible due to the three-year diplomatic process and thanks to the new US Secretary of State John Kerry, who actively contributed to the reconciliation of both parties. The Americans made an agreement on ending the crisis in relations between Turkey and Israel.

Turkish Foreign Minister Ahmed Davutoglu said that Turkey is completely satisfied with the apology from Israel. The head of the Israeli government, Benjamin Netanyahu, found it necessary to explain to his people the reason for the apology, which he wrote on his Facebook page.

He explained his decision by the aggravating situation with every day in Syria, with the presence in Syria of various groups with huge reserves of modern weapons and, most importantly, concern that the available chemical weapons could fall into the hands of terrorist groups, which is a threat to the security of Israel itself.

Israel’s apology to Turkey was sharply criticized by the former Israeli Foreign Minister Avigdor Lieberman, who is the chairman of the foreign affairs and defense commission.

“Israel’s apology for the actions of the IDF soldiers against a terrorist organization is a gross mistake,” said Lieberman. He noted that the IDF soldiers acted within the framework of self-defense against provocateurs, as can be seen in images from Marmara (Turkish ship Mavi Marmara).

Lieberman also added that this apology is a blow to the motivation of the IDF soldiers to perform similar tasks in the future and will contribute to the strengthening of extremism in the region. "It is the current Turkish authorities that are responsible for the deterioration of relations between our countries," he said.

Lieberman accused Erdogan of using any opportunity to criticize Israel, equating Zionism with racism and did not blame it. Therefore, this apology deals a blow to Israel’s national dignity and its status in the region and throughout the world.

However, it should be noted that the Minister of Foreign Affairs of Turkey, Davutoglu, cursed his heart, saying that the Turkish government is completely satisfied with the Israeli apology because the very next day after Israel’s apology, Erdogan said that he would not close the lawsuit against the Israeli military and would not hurry with sending the Turkish ambassador to Tel Aviv.

This may mean that the apologies are not accepted and that Turkey has its plans from which it does not intend to refuse. It is difficult to understand what exactly hurt the Erdogan government so much and get on my nerves. Maybe Erdogan does not like the fact that Israel has climbed into the territory of Azerbaijan, in the region where Turkey traditionally considers itself the favorite.

And because of this, there are constant conflicts between the Israeli army and the terrorist military forces in Syria, which, as we know, are under the patronage of Turkey.

It should also be noted that after Ocalan’s call for disarming the Kurds, according to the Turkish press, in particular, the Milliet edition, the Turkish government began a discussion of the geographical map of the region, which was reproduced in the same edition as below. And the presence of Israel in the region somehow does not fit into the ambitious plans of Turkey. 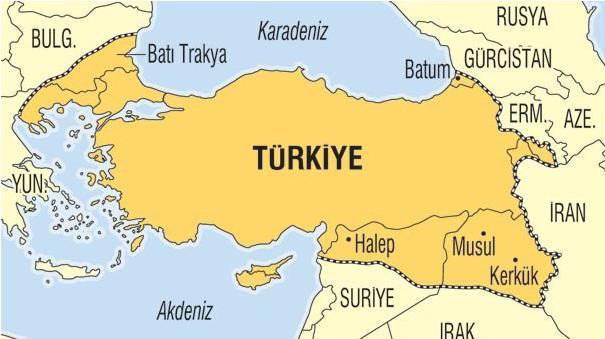 In any case, the possible normalization of relations will in no way affect the situation in the region, as Russian political scientist Yevgeny Satanovsky, the director of the Institute of the Middle East, does not unreasonably believe.