Sociologist Mikhail Gorshkov - about people's aspirations and growing up of society 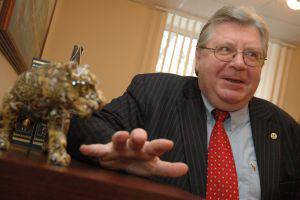 According to the polls of the beginning of 2013, 51% of Russians are in favor of a planned economy of the Soviet type, while not wanting to part with capitalism. How to understand them?


What do people really dream about? Have the “Russian dream” and the consumer basket of happiness changed? Who is interested in the opinion of the people today? These and other questions of AiF were answered by Mikhail Gorshkov, Academician, Director of the Institute of Sociology of the Russian Academy of Sciences.

AiF: - Mikhail Konstantinovich, you recently conducted a study on the theme “Russian Dream”: what kind of it can be realized? ”. So how? Are our dreams the same?

MG: - And you yourself can name the three main dreams of the Russian people today? [Articles: 48578]

"AIF": - Obviously, its real estate - the house, apartment. Well paid work. And a cool car is better than that of a neighbor ...

MG: - Then I will surprise you. The current priorities are to live in prosperity, not counting a penny, health for yourself and loved ones. And - you will never guess! - life in a fair and reasonably organized society. This is the desire of the majority.

Imagine? It is up to which pen it was necessary to bring people to put the public ideal of justice on a par with the dreams of personal and vital!

"AIF": - Maybe we were hoping for justice in the beginning of 90-x?

Dossier
Mikhail Gorshkov was born in 1950 in Moscow. Leading Russian sociologist, Ph.D., laureate of the State Prize of the Russian Federation (2002). Author of more than 200 scientific papers. One of the founders of the sociology of mass consciousness.

MG: - In those years, we wanted something else — changes in order, closer relations with the West, and rapid enrichment. In the wake of idealism and unconscious liberalism, democracy was perceived as synonymous with well-being. It was believed that the liberation of life will solve all the problems: give freedom - and dreams will come true. Freedom was personified with happiness. So they liberated themselves utterly ... Now we realized that the new does not necessarily bring with it a plus. More often at first a minus.

But the dream of a consumer society is still rooted. For example, many firmly sat on the needle of a cheap consumer loan. And, judging by the polls, they do not realize that this trick is akin to a drug. You can understand them: we were too long deprived of much. And here they offer everything - from the kettle to the refrigerator. It is impossible to condemn. But it is terrifying what the faces of buyers making out loans during sales are turning into ...

MG: - Fierce excitement. Especially strong against the background of a heightened sense of inequality that has reached glaring sizes. What scares - began to grow a sense of aggression. In the children's colony, we asked 14-year-olds who committed brutal murders: “Why did you do that? Did you think that the person was in pain, would he lose his life? ”60% replied:“ No, I did not think. I enjoyed the fact that he (or she) becomes ill ... ”Imagine, the children confessed that they receive pleasure from the death of another! In another study, we asked the question: “Are you ready to step over moral and legal norms to achieve a personal goal?” 40% of young people answered: “Ready.”

AiF: Do you associate this with the stratification of society?

MG: - Of course! [articles: 60307] According to Rosstat, today the income gap between the 10% of the most affluent and the 10% of the most vulnerable citizens is almost 17 times. According to our data - in 30! In St. Petersburg - already 80 times, and in Moscow - all 100. Do you think the poor child does not see how his peer is carried in a limousine, and he himself has a bun in his pocket at best?

Similarly, in adults. As a result, the social perturbation hierarchy has changed. In 90, people were indignant because of a lack of money, impoverishment. Today, due to the violation of the principle of social justice (80% of respondents), inequality of property distribution (also 80%), inequality before the law (82%). The material aspects of anger have been replaced by moral ones. Do you know what is most interesting? Not only the poorest and middle peasants adhere to this position, but also more than half of those who live well.

What are we building?

MG: - “Above,” in the government, in my opinion, to no one. Over the past 10 years there has been only one case when, according to our research, the findings were made. Usually, even thanks do not say. Not so long ago, we conducted a survey "20 years of reform through the eyes of Russians." There was no newspaper that would not use it on its pages, including AiF. And from the corridors of power - not a sound. Recently, in the Council of Federation, I spoke to the second persons of all regions - the chairmen of the Legislative Assembly. Our data requested almost everything! Here you have a reaction in the field. In the government they kept silence again. The principle is simple: if the numbers and findings of the polls do not coincide with the opinion of the official in the ministry, then he “knows nothing”, “did not hear” about them, etc. I find it very inconvenient when serious authorities do not order us polls, but foreign ones funds They are regularly interested in the “springs” and “gears” of our society. For some reason, the Russian authorities do not. But without sounding society, it will have fog ahead - without landmarks. [Articles: 49116]

"AIF": - What do the polls promise us? Where are we going?

MG: - I will answer by contradiction. What will not be? Revolutions and other social explosions of the federal scale. The opposition has nothing to captivate the masses. And most importantly, a layer appeared that would not allow this to be done - the middle class. These are 30% of the population and 10-15% "sympathizers" who will behave the same way. These people have property, material support for children and grandchildren. They really do not want to lose it. Almost 40% of them are ready to solve their problems without state assistance. The main thing is that the power does not interfere, but it is desirable that it helps ... They play the role of a buffer, balancing the extreme forces that are trying to rock the boat, to "push" the middle ground. Now you will not “collide” it without explaining why it is needed. There is no idea for which people will refuse the benefits obtained by their efforts. Never in my life!

MG: - The power is now occupied by itself. Really relaxed. And in vain. The middle class asks itself: “What is in the future? Will they come to me with pitchforks? ”Remember the English principle“ my home is my fortress ”? It is today and their dream. But Russia can no longer live only at the expense of the resource of stability. The state provided it. So what is next?

The government has repeatedly stated: "We will not build state capitalism." And what will we do? This question is not answered. But sooner or later the authorities will have to answer it. And what would the people want to build? Mass consciousness is no longer thinking in categories, but in the desired images. Most want to combine all the good from the Soviet experience and market economy. Persecuted academician Sakharov called this convergence - convergence of systems. But the people, on the title, the shop window, the ideological framing, do not pay any fundamental attention. It would be a good judge.

Ctrl Enter
Noticed a mistake Highlight text and press. Ctrl + Enter
We are
About Stalin and KhrushchevWhat you didn't want to know about England
26 comments
Information
Dear reader, to leave comments on the publication, you must to register.