102 was the oldest veteran of the Airborne Forces 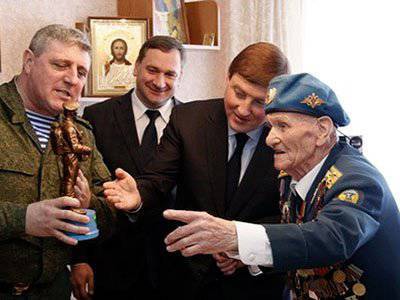 March 19 was a veteran of three wars, an honorary citizen of the city of Pskov, a veteran of the 76 Guards Air Assault Division, the oldest veteran of the Airborne Forces, retired colonel Alexei Alekseevich Sokolov, turned 102 of the year.

The commander of the 76 Guards Air Assault Division, Alexey Naumets, presented Alexey Alekseevich with gifts from the commander of the Airborne Forces: an engraved board and a parachutist figurine. “There are only two of them: one is with the President of Russia, Vladimir Putin, the second is with you,” he specified.

At the festive table, the veteran showed memorable photographs for him, and also sang the song “We were able to stand up in Stalingrad”.

For more than 30 years he was the chairman of the veterans' council of the 104 Guards Parachute Regiment of the 76 Guards Airborne Division, in which he served in the military.