Belarusian military-industrial complex - the pride of the country 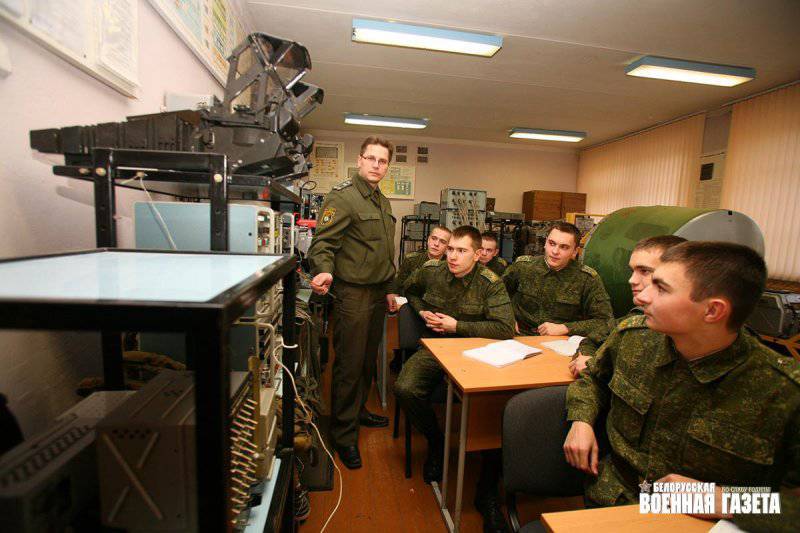 The situation in which the Belarusian defense-industrial complex was located after the collapse of the USSR can be called very contradictory. Despite the fact that the state had a significant share of military production in the total Soviet economy (there were about one hundred and twenty defense organizations and enterprises, including the 15 research institutes and design bureaus), in Belarus, due to its border location, after the war production of the main types of weapons systems and the final defense products.

Probably the only exception was the automobile plant in Minsk, specializing in the production of wheeled tractor for rocket complexes, but these machines were not in themselves weapons. In general, the enterprises of Belarus acted as subcontractors, and were engaged in the manufacture of subsystems and components.

As of today, about five dozen organizations and enterprises are represented in the Belarusian military-industrial complex. It is important to note that, despite the processes of restructuring the defense industry and conversion, the leadership of the country managed to maintain the core of the military specialized enterprises, including all design bureaus and research institutes. In addition, a certain domestic cooperation was formed between these enterprises and the sources of renewal of the defense sector of the economy were preserved. To a large extent, this is due to the attention paid to the problems of the military defense complex by the A. Lukashenko administration.

After 1991, a very purposeful and qualified government policy was carried out in the country, which made it possible to transform the Soviet defense industry into a fully connected and capable complex that focused on the development of promising defense technologies. Among them, first of all, it is necessary to mention telecommunications, information technologies, optical-electronic systems and automated control systems, instrument-making. In addition, the country is still developing and supplying wheeled and tracked chassis for the Russian military-industrial complex.

The close political ties between Russia and Belarus allowed not only to maintain cooperation between the defense-industrial complexes of the two states, but also opened for Minsk the opportunity to act as a completely legal re-exporter and provider of Russian weapons systems in foreign markets, and in addition to modernize the Soviet platforms. and Russian production with developers on legal grounds.

We should not forget that with the beginning of the new century, the Belarusian government was able to support its own defense industry, albeit with a limited, but very tangible, internal defense order.

In addition, in the sphere of high defense technologies and military production in Belarus there are also private enterprises, in particular, Minotor-Service, Tetrahedron, STC DELS. For the most part, these enterprises are organized by immigrants from the state MIC who continue to use their old personal connections in industrial and military circles.

The Belarusian government is well aware that due to the subcontracting position of the majority of military enterprises, Russia remains the main market. Therefore, it is extremely interested in cooperation with Russian defense enterprises. So, back in 1994, the two countries signed a cooperation agreement between the two MIC, which is still in force. At this point in time, more than 4, hundreds of Russian defense enterprises, are partners of the defense-industrial complex of Belarus. For example, Belarusian enterprises supplied sighting systems for armored vehicles, navigation and pilotage systems for Su-33, Su-27UB, Su-30, high-precision measuring complexes and aerial photographic equipment, monitors for computing electronic systems. However, the greatest interest for Russia is the products of the wheel tractor plant located in Minsk. This company is the main developer and manufacturer of so-called machine centipedes for rocket and other systems of the Russian armed forces. At the moment, the plant works almost exclusively for Russian customers, supplying the MZKT-79221 chassis, which are the platform for the Yars and Topol-M missile systems, the MZKT-7930 - Iskander operational tactical missile systems, and for anti-ship missile coastal complexes "Ball" and "Bastion-P". In addition, the company supplies MZKT-79111 four-axle chassis for use in S-300P anti-aircraft missile systems and Smerch multiple rocket launchers. In addition, specially commissioned by the Russian concern Almaz-Antey, the plant developed the three-axle MZKT-6922 chassis for use in the Top-2МE, Buk-M2E, Osa-AKM anti-aircraft missile systems, as well as the five-axis MZKT-79292 platform for the C-400 anti-aircraft missile radar system.

Specialized production at the Minsk Tractor Plant was engaged in the production of tracked chassis for missile anti-aircraft systems. Thus, the GM-355 series was used for combat vehicles of the Thor anti-aircraft missile system, while the Tunguska series for the 2C6 complexes was the GM-352 series. At one time, Russia was looking for an opportunity to replace the Belarusian chassis with Russian ones, but to no avail, therefore, to date, the Russian side has been purchasing these series from Belarusian manufacturers. By the way, Minsk Tractor Works is improving these series. So, in particular, the company has proposed a modified GM-1М352 chassis for the Tuneska-М1 complex, and a GM-1М352Е series for the Pantsir-S-1.

In 1991, a private enterprise Minotor-Service was established in Minsk, which repairs the MTZ chassis and mainly works for the Russian military. In addition, this company is engaged in the development of upgraded packages for samples of light armored vehicles, but with little success. The company also sought to act as an independent designer, providing the 2000 “Stalker” combat reconnaissance vehicle based on the GM-2 / 352 chassis, as well as the 355T Mosquito track carrier in 3. True, they remained prototypes.

As for the development and production of air defense, then this area with Belarus is developing quite well. So, for example, the 256 th station for the repair of electronic weapons is located in Borisov. Since the existence of the Soviet Union, there have been engaged in the repair of certain types of radar stations and C-125 and C-75 complexes. In addition, this company owned the prerogative to repair anti-aircraft missile systems C-200В. Over time, the company mastered the specifics of repairing Buk, C-300PT / PS, Osa-AKM anti-aircraft missile systems, as well as Tunguska complexes, a large number of radar stations, control complexes and ground equipment. It should also be noted that this plant is one of the leading participants in the modernization of the C-125М anti-aircraft missile systems at Pechora-2М for export supplies, as well as in the modernization of air defense systems.

In 2001, the Tetrahedr private enterprise was organized, the main activity of which was the modernization of the C-125 anti-aircraft missile systems in Pechora-2T and Pechora-2МТ. At the moment, the company is also engaged in the modernization of radar stations, anti-aircraft missile systems Osa, Strela-10, as well as the creation of new simple А3 and Т38 Stilet systems.

In the sphere of air defense systems, the Research Institute of Automation Works also works. In the Soviet period, the institute held leading positions in the creation of integrated mobile troop control systems. A large number of integrated systems were designed here, in particular, Panorama (command center of the air force and air defense force), Neman (command center of the air force), Prostor, Poliana and Ranzhir. (command posts for air defense forces), Bor and Sprut (guidance points), Sozh and Bug (flight control points), Helmet (Igla complex fire control center). The institute is also the lead developer of a modernized Belarusian version of the Buk anti-aircraft missile system in Buk-MB, which was first demonstrated in 2005 year.

In the field of optics and electronics, one of the most successful enterprises in Belarus is the Minsk joint-stock company Peleng, which, even during the USSR, was among the leading developers of military optical and electronic products. The enterprise is mainly engaged in the production of sighting systems and sights for armored vehicles. So, the Peleng products include such sighting systems as the panoramic command complex (for the T-90 and new BMPTs), Rubezh-M (for the modernized MBP-2), and the Booklet thermal imaging multichannel sights (for the BMP- 3M), gunner’s sight “Pine-U” and “Pine” (for tanks T-72), thermal imaging single-channel gunner’s sights “Tisas” (for T-72), “Essa-72” (for T-72), “Spring-K” (for BMP-3), “Essa” (for T- 90), “Plis” (for T-90S and T-80U), PL-1 laser infrared spotlight, Sozh-M sight (for BMP-3). All these developments are successfully used not only in the Russian armed forces, but are also exported by Russia.

In the city of Vitebsk there is a design bureau “Display”, which in many respects remains the only enterprise that supplies monitors and displays designed to work in conditions of tough use. The lion's share of products goes to the Russian market.

It is also necessary to note the fact that in Belarus there have recently appeared quite a few state and private enterprises that are engaged in the development of unmanned aerial vehicles. Despite the fact that from a practical point of view, the results of these developments are not impressive, because most of the projects are semi-handicraft, in itself the desire to create something similar is commendable. For example, the military academy of the armed forces, the Minsk association Sistemtroniks, the design bureau INDELA, the joint-stock company MTK, and the design bureau Mir, are engaged in the development of the drones.

There are also enterprises in Belarus that are focused on carrying out repairs, these are the so-called repair factories, thanks to which the country has an independent platform for repairing and modernizing military equipment of the Soviet period.

One of these repair plants is the 140-th armored repair plant, located in Borisov. He has been repairing tanks and armored vehicles (T-55, T-80, T-72, BTR-80, BTR-70, BTR-60, BMP-1 / 2, BRDM-2). The plant receives the main income from the overhaul of the above equipment, which comes here not only on the orders of the Belarusian army, but is also exported abroad from the arsenals of Russia and Belarus.

As for the repair of aircraft, the 558 th aircraft repair plant, which is located in Baranavichy, deals with this. His interests include the repair of Su-22, Su-17, Tu-16, Su-27 aircraft. In addition, already in the years of independence, the plant specialists mastered the repair of Mi-24 and Mi-8 helicopters, as well as the An-2, MiG-29 and Su-25 aircraft.

It should be noted that this plant, in fact, is the main center for the repair of Soviet aircraft for foreign customers in the entire post-Soviet space. Since 1996, the plant underwent a major overhaul of more than four hundred units of aircraft.

Another aircraft repair plant, the 571 plant in Balbasov near Orsha, which was previously engaged in repairing the Tu-22М3 and Tu-16, was later renamed Orshansky aircraft repair plant. Currently, it is fully focused on the repair of Mi-24, Mi-8, Mi-26 helicopters, both for the needs of the Belarusian army and for foreign customers.

Thus, it is quite obvious that the specialization of the military-industrial complex, which was characteristic of the Soviet period, remained in Belarus. The government is trying to use the features of its own defense industry to develop new technologies of both military and civilian nature in the field of telecommunications, information, electronics and optics. In addition, it is very reasonable, given the availability of material and technical resources, the Belarusian authorities are not trying to provide themselves with the main types of ammunition and weapons themselves, but to meet military needs by importing supplies from Russia on preferential terms.

Ctrl Enter
Noticed a mistake Highlight text and press. Ctrl + Enter
We are
Defense industry in the post-Soviet space. Part IThe defense industry of Russia and Belarus are inextricably linked
34 comments
Information
Dear reader, to leave comments on the publication, you must to register.