Army of the Visegrad Group 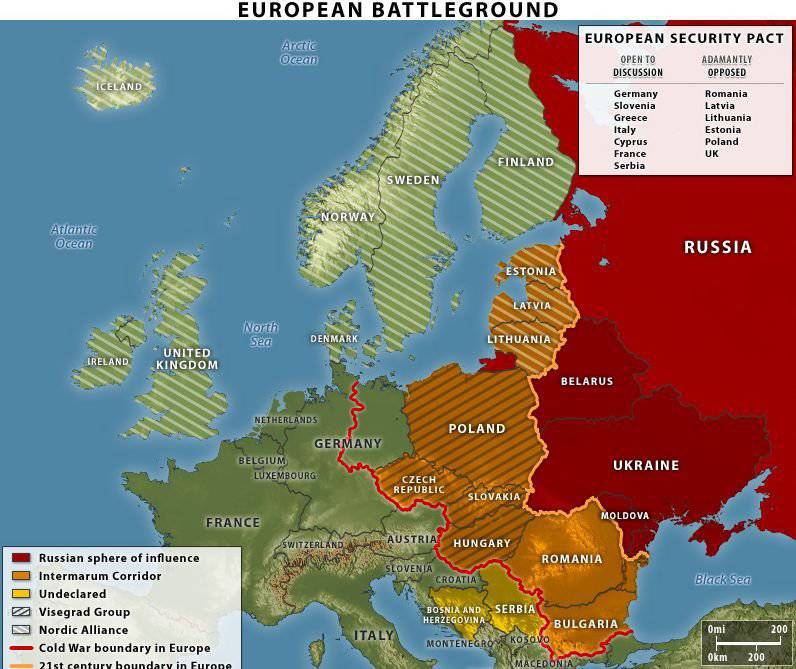 In February 1991 of the year in the Hungarian city of Vyshegrad, representatives of the Czech Republic, Hungary, Slovakia and Poland signed a declaration of intent to create the Visegrad Group (V4). The goal of this joint project is to accelerate the integration of these states into European structures. Their efforts did not go unnoticed - in 2004, they all became members of the European Union.

But things are not so smooth between the members of the Visegrad Group. 22 of the year has already passed, but this union still has no management structure and all decisions are made only after mutual consultations.

At the suggestion of the Polish Foreign Minister Sikorski, which sounded in the spring of 2012, the countries of the Visegrad Group had to express their opinion in a united front when discussing the new EU budget. But the created front immediately cracked at the seams, when in distributing money the Czech Republic and Hungary received much less funding from the cohesion fund than Poland.

I must say that the Visegrad Four is divided into main points: Poland is trying to strengthen its participation in the European Union, Slovakia has become a member of the Eurozone, open Euroskepticism has established itself in the Czech Republic, Old Europe has practically isolated Hungary from itself. In this regard, the Hungarian leader Orban urged the countries of Eastern Europe to unite and conduct their policies, independent of Brussels. But this proposal does not suit Poland, which is counting on a direct dialogue with the leaders of Old Europe, for which it is ready to betray the interests of such “small fry” - the allies in the Visegrad group.

In addition, the second president of the Czech Republic, V. Klaus, believes that cooperation within this group further reinforces the backwardness of the entire region. Partners within the Visegrad Group are also very concerned about the dominance of Poland in the alliance of the Four. Hungary and Slovakia also have many unresolved problems at the government level of these countries.

In March, the 2013 of the year in Poland hosted the V4 group summit. The summit was attended by Czech Prime Minister P. Nechas, Hungarian Prime Minister V. Orban, Polish Prime Minister D. Tusk, and Slovak Prime Minister R. Fico. Chancellor of Germany A. Merkel and French President F. Hollande became honorary guests-participants. Later they were joined by Polish President B. Komorowski. The participation in the summit of representatives of the key powers of Europe served as the basis for uniting the Vischegrad Group with the Vemara Triangle Group (France, Poland, Germany). The leaders of France and Germany once again confirmed the primacy of Poland among the states of Central Europe. Also, the leaders of Germany and France made it clear to the members of the new union that they are full participants in the process of European economic integration. In turn, Polish politicians reminded their European partners that Europe should not remain closed to Eastern European countries when discussing any issues related to the future of the European Union. Moreover, as the Polish Prime Minister believes, the strengthening of the European Union should be carried out in three areas: monetary and economic union, improving the competitiveness of the economies of EU members, and strengthening defense capability. The countries of the V4 group believe that they cope better with the effects of the global economic crisis than many countries of Old Europe. For example, Hungary managed to achieve its own balanced budget, which served as the basis for improving the main economic indicators.

And although the summit addressed economic issues, the main goal was to discuss problems of defense policy and the formation of a common security strategy. The V4 summit can rightly be considered the preparatory stage for the European summit on security issues, which is scheduled to be held in December 2013 of the year in Warsaw. At the March summit they also discussed the general policy in the field of creating a unified industrial, technological and defense base. Merkel noted that the formation of a joint defense potential will bring all European countries to a new level of security. Hollande stressed that this issue requires further elaboration of the EU common defense policy strategy.

Note that the summit was preceded by a working meeting of defense ministers of the participating countries. At this meeting, a document of intent was created to create a common military group - a rapid reaction brigade. The proposal to establish such a military unit was made 2 a year ago, but now this idea has been translated into a concrete decision. It was decided that Poland would take over the formation of the headquarters and command. Also, the Polish side will introduce soldiers into the 1600 grouping, the Czech Republic - 800, Slovakia - 400, Hungary - 350. The Czech Republic will transfer military equipment to the formed general military group and provide logistics. Hungarian military engineers and Slovak specialists will work in the battle group, provided with the necessary equipment to carry out protection against weapons mass destruction. It is planned that the deployment time of the combat group will be no more than 15 days. It is planned to complete the final formation of the Visegrad Battle Group by the beginning of 2016.

The plan to create such a joint militant group is fully consistent with the regional policy and is inextricably linked with the course of NATO and the EU to implement the pan-European security system. It is only natural that the strengthening of cooperation between countries in the field of defense is happening right now. After all, each of the countries participating in the summit is interested in modernizing its armed forces, but none of them has sufficient financial resources to carry out these plans alone. Therefore, for countries such as Poland, Hungary, Slovakia and the Czech Republic, participation in the creation of European armed forces makes it possible to increase the combat readiness of their armies. The biggest defense spending in the V4 group is in Poland. The remaining members of this group relied more on the cooperation and support of the countries of the North Atlantic bloc in modernizing their armed forces. Members of the V4 group have repeatedly held talks and consultations on the purchase of new weapons and equipment, as well as cooperation in the field of defense complexes and improvements related to these plans, national legislation. The result of these efforts are only preliminary declarations of intent. The countries of the V4 group failed to implement a single joint research project. Neither the modernization nor the purchase of new weapons.

The confusion in the implementation of plans to strengthen the military-technical base of the armies of the V4 countries is confirmed by the current situation in the air forces of these states. Czech Republic and Hungary signed a lease agreement for the Swedish JAS-39 Gripen. Warsaw preferred the American F-16. The Slovaks retained their Soviet MiG-29. Now the Czechs have offered their allies in the group to buy a batch of modern fighters from the United States, but Prague has not yet responded to this initiative.

Poland spends about 1,9% of GDP on military spending, while its allies in the V4 group only 1,1% of GDP. As the analysis of the situation showed, not only the economic crisis caused a reduction in defense spending in Hungary, Slovakia and the Czech Republic. The reduction in the financing of military spending is related to the position of these countries, the essence of which is that the local governing and political elite do not see a threat to the security of their states.

Since Poland’s defense investments in 5 exceed the defense costs of the other countries of the Visegrad Group, it’s likely that the Polish leadership will aim at strengthening military cooperation with the Nordic countries and Germany. And these plans are much more real than seeking mutual understanding of the Visegrad partners. In this regard, it is unlikely that the implementation of joint defense projects planned at the March summit will be implemented in the near future.

Ctrl Enter
Noticed a mistake Highlight text and press. Ctrl + Enter
We are
Polish claims to Ukraine. Will Warsaw decide to “bite off” Galicia?In Hungary, the wall, in Italy - the protests. How Europe solves the problems of illegal migration
20 comments
Information
Dear reader, to leave comments on the publication, you must to register.