PSCs can be granted the right to detain citizens. 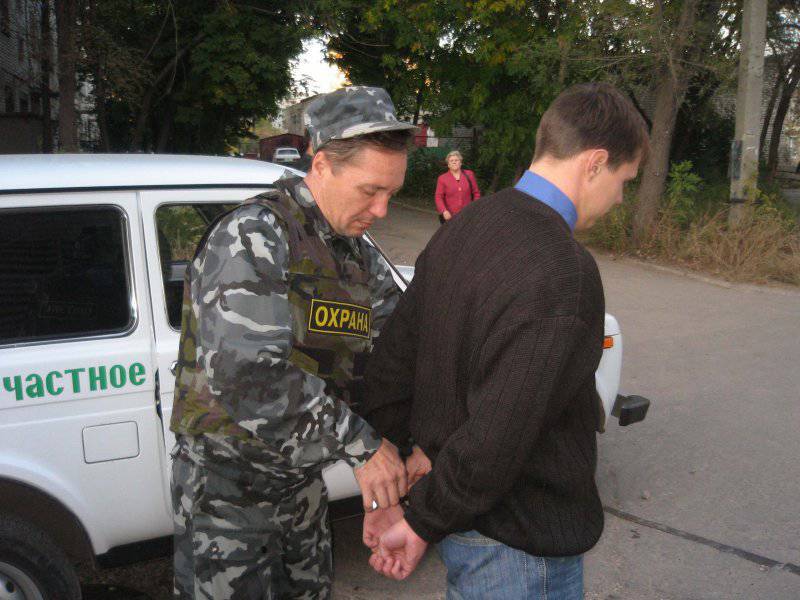 After the reform of the Ministry of Internal Affairs, it turned out that the reduction of personnel by 20% led to the hardest situation in the implementation of measures for the disclosure and prevention of crime, prevention of crime in the streets of Russian cities and towns.

Government policies aimed at further additional reductions in the number of police will, in the future, lead to a situation in the expanses of the Russian hinterland, when there will be only one district police officer on the 200 km.

To remedy the situation, State Duma deputies came up with a proposal to involve numerous private security companies in the fight against terrorism and to restore order in public places. "Private traders" do not object to join in the fight against offenses, but subject to the legislative assignment to them of additional rights. According to the Ministry of Internal Affairs in Russia, more than 20 thousand security organizations are registered, with a total staff of about 1 million employees. Of these, approximately 100 thousand are former employees of the Ministry of Internal Affairs. Private security organizations, as a rule, have the best equipment, both in armament and special equipment.

At various levels, meetings were held on the issue of attracting private organizations to partially fulfill the functions of state law enforcement agencies. And these discussions were more like trading than an attempt to constructively solve the most complicated problem concerning the security of the citizens of the country. Private security companies are ready with all their human and technical resources to assist government agencies to restore order and control the situation in all places of mass gathering of people from the western to eastern borders of Russia. But, in response, they are required to legally secure for them a part of the powers that state paramilitary structures possess. While we are talking about the right to check the cars and the inspection of citizens in case of a threat of terrorist attack. But no one can vouch for the fact that soon “volunteers” will not demand that they be given the right to conduct operational investigative work, etc.

At a time when there is practically no public control over the activities of state law enforcement agencies, the granting of such rights to private security companies can lead to an uncontrolled infringement of the rights of citizens.

According to a number of analysts, it is also possible that local authorities will create lawlessness by the hands of PSC employees.

Currently, security guards at retail outlets are not allowed to inspect visitor bags, but often, taking advantage of legal illiteracy of citizens, violate the law. Employees of private security companies have enough technical means and capabilities to control visitors and detain a suspect of theft before the arrival of a police officer without inspecting his belongings. And, nevertheless, the management of the PSC insists on granting them the right to inspect. And if the inspection, being a procedural act, takes place with witnesses, then when inspecting the visitor’s things the guards are not sure that they observe the rights of a citizen in the amount guaranteed by the Constitution of the Russian Federation. And most importantly, the entire evidence base on the conduct of the inspection in the form of video camera records can be destroyed by employees of private security firms. Indeed, the guards can detain the alleged offender no more than three hours. There were cases when the police squad did not arrive on time, but this circumstance does not entitle the employees of a private security company to violate the law - in this case they have the opportunity to take the detainee to the nearest police station within the period established by law.

Every citizen is obliged to obey the authorities, but the private security guard is not one. Therefore, in carrying out their duties, the guard may well be repulsed by a citizen, whose actions may be recognized by the court as a measure to protect his honor and dignity.

And how to find this fragile distinction between the protection of the property of a legal entity and an insult or an attack on a person’s life. Many lawyers believe that changing the law, in the direction of granting large rights to private security firms, can lead to a situation where the guards turn into thugs in the service of their masters.

This concern also applies to such structures that are planned to be involved in law enforcement in public places, such as warriors and Cossacks. Since, in this case as well, the rights and obligations of these public structures are not legally regulated, abuses and all kinds of complex collisions are not excluded.

It must be said that in Soviet times, warriors had no right to independently detain citizens. Their duty was only to help the law enforcement officer to stop the crime.

Analysts say that if you now go to the creation of legitimate armed formations from private security services or Cossacks, then well-armed and organized groups will appear in the country, whose actions will not be located in a system of legal regulation similar to the Ministry of Internal Affairs. In this regard, it is dangerous to transfer the rights of the authorities into private hands, especially those related to the power functions of the state.

Ctrl Enter
Noticed a mistake Highlight text and press. Ctrl + Enter
We are
ZRK C-200 rust in the woods near Moscow
87 comments
Information
Dear reader, to leave comments on the publication, you must to register.