American patriotism through the eyes of a Russian person, or is it necessary to prohibit foreign cinema?

March 23 2013
251
This article is a response to the article. "Russia really became a colony of the United States"


Scrolling Once Again news information of "Military Review" for a cup of coffee, I came across this article.

Do coincidences happen in life? I happened to them, because literally half a day before that I decided to visit the cinema and, for lack of a better one, I took a ticket to the film “Elusive”. He was the main character of the article. 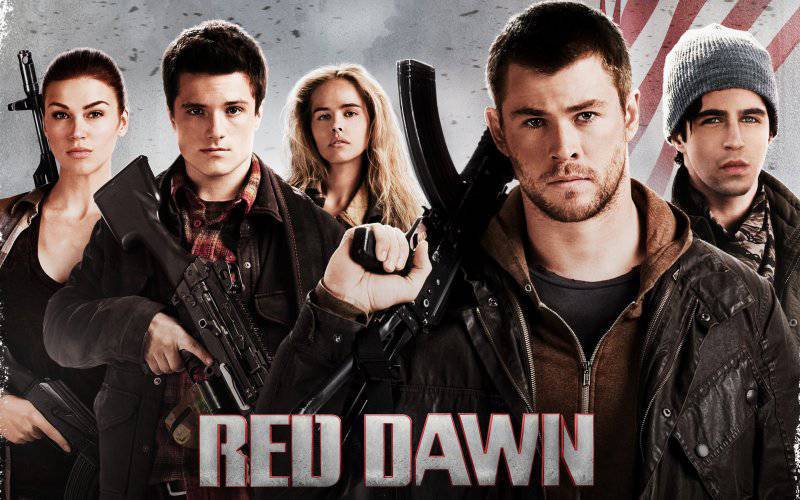 So, what, in fact, speech. The author of the article, Alexander Plekhanov, actively probing all the novelties of film distribution, found in his opinion “non-patriotic Western films” and wondered: why do we let them on the screens? Wouldn't it be better to ban the display of these pictures? The aforementioned film seemed particularly antipatriotic to him.

The film is like a film. Actually, the template Hollywood style: action, shooting, snot, bad acting, a lot of stupidity and pseudo-documentary events. However, with all this, the film seemed to me more than patriotic, and in a good sense of the word ...

Yes, it happens when the author of the picture seems to be trying to convey one idea - wild American patriotism, and the result is a chaotic mixture of stupidity and parodies. In general - a funny movie. 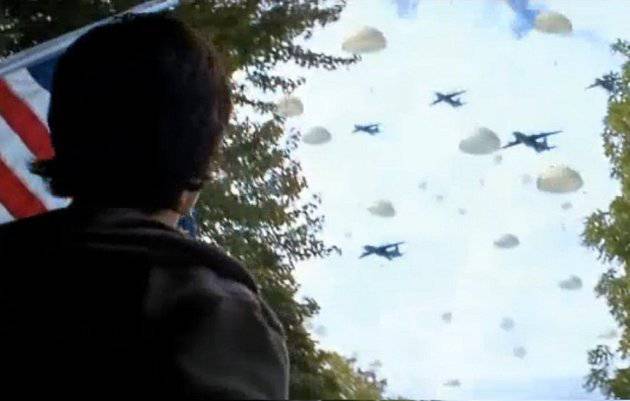 The first ridiculous scene is a mass landing of the enemy on the peacefully sleeping United States. Broken stamp, frightening everyone already a century.
In 40's, a massive Japanese landing was not expected. During the Cold War, the landing of the Soviets was not expected. Now here's a new attack. Long thought who: Russian again, or is it Chinese? It turned out the North Koreans ... But how, albeit numerous, but technically backward army, which does not have superiority even over its southern neighbor, and with the BTA fleet in the whole 3 of the Il-76 and a couple of dozen old An-2 and An-24 suddenly treacherously attacked a peaceful America? By the middle of the film they will give us a hint - they say, not without the help of the Russians. But all the same, there could not be many attackers, since there could not have been many planes.

In Russian in this stories By the way, too, has its place - they captured the entire west coast of the United States and part of the central states. Apparently, like the North Koreans, exclusively by the forces of the Airborne Forces. True, given that some of the aircraft had to be sacrificed to the "allies," the number of troops was interested. Hardly more than two divisions. Against the entire American army ... And Japan, the Republic of Korea and all NATO seems to have surrendered even earlier. Get away ...

And 10 or 20 thousands of harsh Russian paratroopers, along with the same number of paratroopers from North Korea, were able to crush more than half a million groups of US Ground Forces and as many national guardsmen ... During the day ... Taking all American equipment into trophies ... Not is there really something to be proud of?

Further we learn the details: What are American soldiers? Where are these fighters for democracy and universal happiness? It turns out they dropped an electromagnetic bomb and, of course, everything Tanks, the strikers and hammers immediately died out, the machines broke down, the grenades stopped exploding, the knives went dull, the hamburgers in the fridges went bad. In general, as always, with such a story - the Yankees do not fight ice. But the invaders immediately received trophy vehicles.

By the way, the North Koreans were surprisingly not made idiots - quite sane soldiers. And not even a single Russian was killed. Yes, and from the Russians there they showed only one paratrooper, which the "partisans" immediately ranked as the Airborne Forces Special Forces (from the 45 Guards. Special Forces regiment, perhaps?). But he turned out to be so harsh that he didn’t even participate in any shootout, but only watched and advised ... It was clear from his cold-blooded, murderous gaze that he had captured all of Washington with his own hands and burned it to the ground. Clinton era brothel - White House.

And I have only one question: why wasn’t this film made by us ???

A joke, of course, but in every joke there is some truth.

Why, instead of such films, we shoot all sorts of “Penalties” and “Burnt by the Sun”, showing our ancestors exclusively in the form of dull cannon fodder?

But we knew how to shoot. Let us recall the Soviet school of cinema: “The battalions are asking for fire” by Chebotarev, “Liberation” by Ozerov, “Some old men are going to battle”, Bykov and others. Beautiful films, classics of the genre, so to speak.

In 90, we were not in the mood for high art - everyone enthusiastically watched movies about gangsters.

True, then rather strange pictures began to appear again:

"Bastards" - a strange film about child criminals, which "bloody regime" sent to the last battle. The author clearly does not know that all the numerous sabotage groups, and there were many of them formed during the war, as a rule, were formed from party, ideological communists and "trustworthy" athletes.

“Shtrafbat” is a mockery of history on the part of Volodarsky and Dostal.
"Burnt by the Sun. Standing on" and "Burnt by the Sun-2. Citadel" is the most expensive and most disastrous film in the history of Russian cinema, a video collection of myths invented in the inflamed brain of Nikita Mikhalkov.

"4 of May Day" is a film about the war of "good Russians" with "good Germans" against "bad Russians" ...
These films were not created in Hollywood, they were created in Russia, with Russian actors, and were financed by our Ministry of Culture ... Maybe it's time to think about our films?

And as for Hollywood - do not bother to fill your head. He makes pictures for himself. Promotes ideas of his country. It would be strange if it were different.

And the youth? - Young people are not as stupid as some think to orient their value system for cheap foreign films.

I specifically watched the movie "5 Days in August." Pretty laughed at the director's stupidity. And I was not offended for my national dignity, because the opinion of foreigners can in no way relate to it. And can not hurt.
Then he watched the video review of Evgeny Bazhenov about this film.

Yet the Americans are funny. Stupid, but funny ...

Patriotism does not bring up on prohibitions alone. Need to do it yourself. In family. What is the use of propaganda, when each of us sees what is happening around: bribes, betrayals, conflicts, troubles, crime.

The future of our children depends only on ourselves and on our upbringing, and this cannot be transferred to anyone else ...

Ctrl Enter
Noticed a mistake Highlight text and press. Ctrl + Enter
We are
Dmitry Puchkov: You can’t defeat someone’s propaganda - organize and lead your own.What you didn't want to know about England
251 comment
Information
Dear reader, to leave comments on the publication, you must to register.