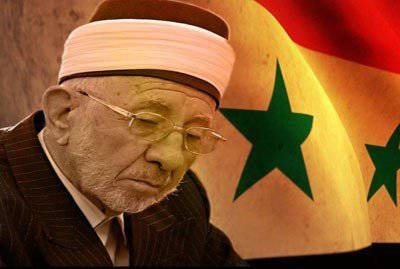 21 March in Syria - a triple holiday. First is Mother's Day. Secondly - Teacher's Day. Thirdly, Syrian Kurds celebrate Nowruz on this day - the coming of spring and the new year. Militants of the so-called “Syrian opposition” also decided to “celebrate” the holiday in their own way.


In the center of Damascus in the mosque of Al-Iman, a well-known Syrian and Arab theologian Muhammad Saeed Ramadan Al-Buti lectured to students. He is a very authoritative religious figure in the Middle East. All his life he led the fight against extremist Islamist movements and preached moderate Islam, for which he was repeatedly threatened by the bearers of misanthropic ideas, who have only one goal - to kill the "infidels."

A suicide bomber entered the mosque and set off a "shahid belt." 84-year-old scientist-theologian died, dozens of students died, who listened to his lecture, people died who just came to pray ... By now, the number of the fallen has reached 42 people, among them the grandson of a murdered scientist. There are about a hundred injured, many of them in critical condition, and therefore the list of sorrows is growing.

Why was Ramadan al-Buti hated by terrorists, that for the sake of killing these criminals hiding behind Islam did not stop to blow up the mosque along with the people praying? Yes, if only for the fact that he consistently spoke out against terrorism. He supported the idea of ​​inter-ethnic dialogue, supported the political program for resolving the crisis put forward by President Bashar Al-Assad. He called for peace and love, called for preserving the traditional values ​​of Syria, such as tolerance, the coexistence of representatives of different faiths, respect for people of all nationalities. He repeatedly said: "Our Islam is the one described in the Quran, and not the one dictated by the West and the United States."

For those who split the Syrian society along religious lines, it was also a bone in the throat that the late sheikh was a Sunni. They are trying to create a false picture of what is happening, as if the Sunni majority opposes the Alawi minority, diverting attention from the true causes of what is happening, from the external forces fueling the conflict, from the colonialist plans of the United States, France, Great Britain, which for decades tried to bring Syria to its knees .

Every Friday, Al-Buti delivered a sermon at the Umayyad Grand Mosque in Damascus. These sermons were broadcast by Syrian television. He called for national reconciliation, for the unity and solidarity of the people in the face of foreign aggression.

In one of these sermons, he said that the harbingers of victory are already appearing in Syria. God does not forgive the oppressors, and therefore the victory of Syria over them is already near.

He welcomed the efforts of the Syrian army, which protects the Motherland and its citizens from terrorism. He condemned the actions of the militants of the so-called "opposition" - such as acts of terrorism, destruction, killing of innocent people. According to him, this was all done under the cover of the “law of hatred”, which was used by the enemies to destroy the Syrian state, which has always been a source of peace and security.

Ramadan al-Buti stressed that the haters of Syria want to fight against Islam by the hands of Muslims themselves, and therefore they cover up their crimes with the concept of "jihad". However, this concept does not give the right to commit crimes, rob, deprive the hungry of the last piece of bread.
According to him, every sane person knows that the path to Islam does not pass through the American White House or Tel Aviv.

The late scientist believed that the ordeals that befell Syria would soon pass away, remaining only in human memory in order to learn from them.

The ideologues of the so-called "Arab spring" call for the opposite. In particular, Saudi Sheikh Yousef Al-Qaradawi, who said that it is necessary to kill every Russian and every Chinese in Syrian territory in retaliation for the veto imposed by these countries on the anti-Syrian resolution in the UN Security Council. The same sheikh issued a fatwa about the need to kill any supporter of the current government in Syria, regardless of whether it is a man or a woman, a child or an old man, a soldier or a civilian, a secular or spiritual person. It is clear that Sheikh Ramadan Al-Buti, who calls for love and harmony, was an ardent enemy for such perverters of Islam.

These are precisely these thoughts, these sermons that were hated by those who distort Islam, who are covering for them the atrocious atrocities, in particular, such as this terrorist act committed on a festive day in the sacred building of an old mosque.

It is characteristic that exactly a month ago, on February 21, in the same area - Al-Mazraah, not far from the Russian Embassy, ​​a bloody act of terrorism was carried out, killing about 100 people and causing great damage to residential buildings. In that incredible power of the explosion, the mosque, standing nearby, survived. A month later, the bloody paws of terrorism reached out to her.

Nevertheless, Syria met Mother's Day ... Met with tears in her eyes. Because many mothers have lost their beloved sons and daughters in two years. Because Syria is the mother of tens of thousands of dead sons killed by someone else’s hands, mother blasphemously accused by the murderers themselves of committing this crime.

In Aleppo and Tartus, ceremonies were held in honor of the mothers of the dead soldiers and civilians who honestly fulfilled their duty. Women were presented with flowers, gifts. They were given the floor, and they told about their children, who gave their lives for their Motherland, saying that, despite the pain and sorrow, they have something to be proud of. Aliya Hitlani, the head of the Syrian Women's Union branch in Aleppo, said: “The mother is the progenitor of future generations and the teacher of heroes who triumph over the enemies of Syria.” Families of heroes condemned the hated fatwas of some pseudo-religious figures and the supply weapons fighters, as a result of which mournful lists are constantly replenished. Despite the suffering, everyone said that they believed in victory, that their children had not given their lives on this path for good reason.

In addition, Syria is celebrating on these days another holiday of peace and creation - Teacher's Day. On this occasion, President Bashar Al-Assad took part in awarding mothers of schoolchildren who died because of the terrorist attacks. The ceremony took place at the School of Fine Arts in the center of Damascus. He came to morally support those who, despite all the terrorist threats, continue to give children knowledge.
Bashar al-Asad said: “Today teachers celebrate their holiday. But the teacher and the student are integral to each other in the service of science. Therefore, this holiday is common for both teachers and students. ”

“Today, all of Syria has been injured,” said the head of state, “no one left who was not touched by the bereavement of close people — brother, father, mother. But the most tragic is the loss of children. But despite all the suffering, the Syrians do not become weak. There is a battle of will and endurance. We are strong and therefore we can protect our sons and keep the memory of the fallen. ”

The president listened attentively to the people who shared their pain with him. He received the relatives of the deceased teachers, who were killed by terrorists for doing their duty. “When terrorists attack teachers, this once again confirms that our battle is a battle of all Syrians and is directed against ignorance,” he said.

The Syrian leader called the lost teachers heroes who gave their lives for giving knowledge, and recalled that without their efforts in Syria there would be no universities or scientists. "Our duty to Syria is to continue the path of these heroes, to implement their just cause, so that Syria is strong and resilient," he added.

According to Bashar al-Assad, the Syrians are getting stronger. The people never capitulate, and the country remains steadfast, as its sons stand in one row, fighting for victory.

Ctrl Enter
Noticed a mistake Highlight text and press. Ctrl + Enter
We are
Syrian Kurdistan: Will there be peace and freedom?Syria: Americans scare themselves, and Asma Asad buys chairs
36 comments
Information
Dear reader, to leave comments on the publication, you must to register.