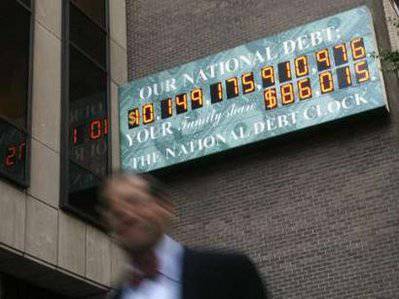 The US government has stolen $ 15.876.457.645.132,66 from future generations of Americans, and we add to this more than a hundred million dollars daily. This 15 trillionth pawl over the past 30 years has been the cause of the highest standard of living the world has ever known. However, this amazing prosperity we enjoyed was fake. It is not present. We lived beyond our means for so long that we no longer understood what “normal” activity was. But every debt addict once runs into a wall, and the same will happen to us as a state soon. At some point, under the weight of our national debt, our financial system will collapse, and this bankruptcy will hit every American. With the current system, there is no mathematical possibility of paying debt. We are on our way either to default or to hyperinflation. We have accumulated the biggest debt in stories of the world, and if the next generations of Americans appear, they will look back and curse us for what we have done. We like to think of ourselves that we are wiser than previous generations of Americans, but in fact we were so stupid as to be beyond words.

Both sides are guilty. Both receive an unsatisfactory rating.

If the Republicans really wanted to prevent the federal government from accumulating this debt, they would have done so.

If the Democrats really wanted to prevent the federal government from accumulating this debt, they would have done so.

Therefore, we will not pretend that the “hero” of this drama is one of the political parties.

For the damage caused, both sides will go down in history as having allowed the greatest carelessness in financial matters during this period of American history.

Unfortunately, neither side shows any signs of change in its line.

I did not intend to make this article completely political, but the truth is that the national debt threatens to destroy everything created by previous generations, and our politicians still offer nothing but justifications.

Next up are the 27 things that every American should know about government debt ...

#2 If the average interest rate on US government debt rises to just 7 percent, then the US government will spend over a trillion a year just to pay interest on the national debt.

#3 If you start spending one dollar every second right now, in order to spend one trillion dollars, you need 31 for a thousand years.

#4 Since Barack Obama joined the White House, the US national debt has increased on average by more than $ 64000 per each taxpayer.

#5 Barack Obama will be the first president with an annual deficit of over a trillion dollars in each year of his first 4-year reign.

#6 If you lived at the time when Jesus Christ was born and spent a million dollars every day from the day he was born, today you would not spend one trillion dollars yet.

#7 Since the Republicans gained control of the House of Representatives, the US national debt has grown by 1,6 trillion dollars. So far, this Congress has added more to the national debt than the first 97 Congresses combined.

#8 During the administration of the Obama administration, the US government has accumulated more new debts than during the time that George Washington began the presidency until the beginning of the Bill Clinton presidency.

#9 If Bill Gates gives all his fortune to the US government, it will close the US budget deficit for just 15 days.

№10 As Bill Whittle showed, if you take every cent that every American earns in excess of $ 250000, this amount will close only 38 percent of the federal budget.

#11 Today the ratio of government debt to GDP in the United States is much higher than 100 percent.

№12 According to the forecast made in the recently revised directive document of the Navy “Analysis of the US financial imbalance with regard to generations. Who will pay and how? ”, By 2050, the US government debt will be 400 percent of GDP.

No.13 The US government debt per capita is already greater than in Greece, Portugal, Italy, Ireland and Spain.

No.14 At the moment, the US government is responsible for more than a third of the government’s debts around the world.

#15 The amount of US debt in the hands of foreigners is about 5 more than a decade ago.

#16 The US national debt is now more than 22 times as large as it was at the time Jimmy Carter took office.

#17 According to forecasts, the US national debt will exceed 23 trillion dollars in 2015 year.

#18 Mandatory government spending exceeded for the first time the total federal income in the 2011 fiscal year. It was assumed that this could not happen earlier than 50 years.

№21 American families now actually receive more money from the US government than they pay the government in taxes.

#22 The US government spends money on the most stupid things imaginable. For example, in 2011, the National Institutes of Health spent $ 592597 on research to find out once and for all why chimpanzees throw poop.

#24 Over the course of 2011, the Federal Reserve acquired about 61 percent of all US government Treasury bills.

№25 At the moment, the US government debt is more than 5000 times more than it was at the time of the creation of the Federal Reserve.

#26 If the federal government starts paying the US state debt at a rate of one dollar per second right now, it will take 480 thousands of years to fully pay off the national debt.

As the US economy continues to collapse, more and more Americans are becoming financially dependent on the federal government.

For example, food stamp spending has doubled since 2008. Millions of Americans who have lost their jobs need government assistance. Since Obama became president, the number of Americans receiving food stamps has grown from 32 million to 46 million.

For Spanish-speaking citizens, radio broadcasts “novelas,” in which the use of food stamps is presented as part of the official task of increasing participation in the Supplemental Nutrition Assistance Program (SNAP).

Each story consists of a series of 10, called "PARQUE ALEGRIA", OR "PARK OF HOPE." In the semi-dramatic scenario, characters act to persuade people to get food stamps or explain how health benefits are for using them.

I’m ready to do anything to help those who can’t feed themselves, but do we really need advertising to encourage people to become more dependent on the government?

Of course, medical care (Obamakhranenie) greatly inflates our debts. Obamakranenie is supposed to add more than 2,6 trillions of dollars to US public debt in just the first decade.

So where do we get all this money?

We cannot spend money that we don’t have. We must prioritize. Each of the items of public spending should be reduced.

But instead, we behave as if we could rip off future generations of Americans, and nothing much will happen.

What we have done for our children and grandchildren is more than criminal.

The truth is that we should have listened to the warnings of our founding fathers about government debt. For example, Thomas Jefferson once said that if he could make another amendment to the constitution of the United States, he would impose a total ban on any borrowing of the federal government ...

Where would we be today if we listened to the advice of Thomas Jefferson?

This is worth thinking about.

Ctrl Enter
Noticed a mistake Highlight text and press. Ctrl + Enter
We are
The tragedy of the American army ("The Atlantic", USA)Who wrote off the debts of Russia?
76 comments
Information
Dear reader, to leave comments on the publication, you must to register.