The fruits of the education reform in Russia: “Maybe something in the conservatory to correct?” 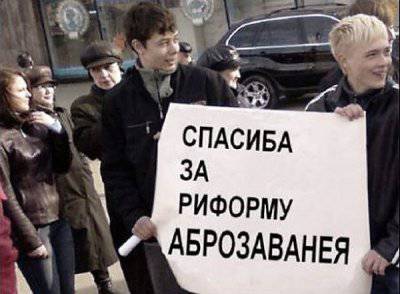 One of the most "moderated" areas of the Russian Federation for all its new historydefinitely an education. When did educational reform start? - today almost no one remembers. At the same time, no one will say for sure when this reformation will end, and, most importantly, with what. We will try to dive into a retrospective of educational perturbations that have occurred in Russia in recent years, and find out how these changes have affected the average graduate.


Diving into educational metamorphosis, the first thing (not even with the naked eye) you notice that significant "shifts" have affected the higher education system in the country. The number of universities in Russia today just can not name even the Ministry of Education of the country. The mass media are offered only approximate data, which indicate that in the Russian Federation at 2012 a year there were about 1100 universities and about 2000 of various branches. In order to compare with something, and, let's say, so that the field for assessing the progress of the reform would show itself, we give data on the number of universities in the USSR in 1985. So, today in Russia - 1100 universities (plus or minus the “error” of the Ministry of Education and Science), and 28 years ago in the USSR, the number of higher professional educational institutions was 502. As they say, the reform has shown itself in all its glory. But you still can not forget that the population of Russia today is 1,8 times less than the population of the Union in the year 1985.

Together with the number of universities, naturally, the number of students enrolled in these universities has increased. So, today almost 7 millions of people of different ages get higher education. Around the fifth of this figure are individuals who receive a second and subsequent higher education. And the profiles of these second and third "towers" often do not overlap with the profile of the "tower" No. XXUMX. Compared to the USSR sample 1, the number of students in Russia is more than 1985 times!

We return to the number of university graduates. They, as already noted, almost seven million. It turns out that the educational system has been reformed in such a way that about 4-5 managers account for every worker ... Even if the number of workers to transfer all graduates of technical schools (and this is about 2,4 million people), it turns out that 1-2 manager. One indicates how to hold the wrench, and the other in circular motions with his hands demonstrates which way to wrap the nut ...

If the Ministry of Education and Science considers such a situation in the country to be a positive achievement of reforming, it is difficult to explain which paradigms are guided there. Perhaps, in the Ministry of Education and Science, a priori, they are sure that two-thirds of those receiving a “crust” about graduation will be replenished by the working strata of the population ... But if so, then forgive me, on what basis do universities and universities like mushrooms grow after the rain? their affiliates are allocated cash. Moreover, these funds are not taken out of the pockets of Dmitry Livanov and his deputies, but from the state budget, that is, from taxpayers' wallets. It turns out that the Russians themselves are sponsoring an army of unemployed university graduates, allocating funds from their income for their new education and retraining ...

The next “achievement” of the Russian educational reform is the widespread introduction of the Unified State Exam for graduates of secondary schools. It would seem that here, too, you need to say thanks to all the ministers of education without exception, starting with Mr. Filippov (now the head of the Higher Attestation Commission), continuing with Mr. Fursenko (now presidential aide) and ending with Mr. Livanov, because theoretically children who studied in distant regions of the federation. Theoretically, everything seems to be the case, but practically ... Educational reform here also presented its surprises.
Firstly, the very schooling itself (especially in the upper grades) has long ago turned from a truly effective educational process into a total training of students for the tests of the unified state examination. And it's silly to blame school teachers for this. They have long been put in the framework when it is the performance of the school in terms of the delivery of graduate classes to the EGE is put at the forefront in evaluating the effectiveness of the educational process. As they say, you can not read Tolstoy, but you must know how many diopters were in Pierre Bezukhov's glasses ...

Secondly, the passing of the USE often turns into nothing more than a profanation. A resident of the Voronezh region Lyudmila N. (the mother of a secondary school graduate) says:

It was in 2010 year. My son did a good job at school, but there were problems with mathematics. They found out which school the city will take the Unified State Exam in mathematics, arrived there and decided to appeal to the teachers for their non-repayable help. They refused, but one of the teachers said that we had better contact the technical staff (cleaner, for example). I didn’t understand how the school cleaner could help us, but then it turned out that my son can take time off to take a toilet twice at the time of the exam. The first time he takes time off is to leave the tasks copied to the sheet in the toilet at the appointed place, from where the cleaner will take them out to the “right people”, and the second time she will go “take out the garbage” again and, taking the tasks decided by the “right people” bring the sheet to the toilet, leave it at the appointed place, whence his son will come and pick it up for cheating. We were surprised that everything was already thought out to the smallest detail ... As a result, we arrived by car with a person who agreed to help us for a reasonable fee. He is right in the machine of the exam in mathematics and we decided. School cleaner also did not disappoint. In general, the son scored a sufficient number of points and entered one of the universities of St. Petersburg.

The undoubted "success" of educational reform can be attributed to the famous Bologna three-stage education system, when after high school professionals can go from bachelor to master. At the same time, it seems, the ideological inspirers of the introduction of this system do not really know why it is needed in Russia. Graduates-bachelors receive a very specific education, which is limited to such a narrow framework that often for the beginning of the direct work of a graduate simply do not have enough knowledge or skills.
Speaking about the classical Bologna system, which aims to cover all the universities of the country, it is necessary to mention more than strange criteria for evaluation. The fact is that to get a credit for a particular discipline, a student needs to gain a certain number of points, and he has the right to choose the section of the discipline himself, the points on which he will accumulate. It turns out that it is simply unprofitable for a student to study discipline in a comprehensive manner, because with this approach, you need to learn more, and it is more difficult to score grades. As a result, for example, in the course “Classical Mechanics”, he chooses the topic “Newton's Laws” and, for a certain number of lectures and seminars, perfectly masters this topic, gaining a sufficient number of points to get a credit. That's just all the other topics of the course pass by him. But for him and for education reformers it does not matter anymore - the main thing in the diploma will be the mark that the graduate passed the credit for the course “Classical Mechanics”. That's just too narrow, he walked along this course ... So narrow that this narrowness obviously will not play for him in the process of real work in the profession.

True, another question arises: how many university graduates work in their specialty today? Even after graduating from famous universities, the number of students employed by the acquired specialty is at best 55-61%. But there are in the country and such universities that graduate students literally to nowhere. The percentage of real (non-fake) employment in the specialties received may tend to zero. This was the educational reform ... If "yes", then it is worth pondering over the adequacy of those individuals who today support both hands with just such an option of educational reform in Russia ...

Ctrl Enter
Noticed a mistake Highlight text and press. Ctrl + Enter
We are
Is the Russian education system reformed blind and deaf?
71 comment
Information
Dear reader, to leave comments on the publication, you must to register.