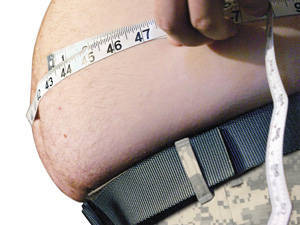 In the 1921 year in Kansas opened the company White Castle, a specialty of which were at that time unknown to anyone burgers. The relatively small price (5 1946 cents up to a year) and unusual dishes attracted buyers, and doubts about the safety of the product have been dispelled as a result of a cunning stroke Billy Ingram company owner (specially hired people in white coats gave the impression that even the doctors are buying hamburgers). Soon the company began to appear competitors, the most famous and successful of which was McDonald's.


In the 1921 far, no one could not have imagined that almost 100 years, "fast food" avenge its creator and will even threaten national security. The fact is that obesity in the United States has long been a scourge of society. According to various data from 60 to 70 percent. The population of the United States in varying degrees, suffer from obesity. The main reason for this situation, experts call the favorite dishes of Americans hamburgers, pizza and potato chips, as well as manufacturers of modified products. Products are made in such a way that consumers turn into food addicts, greedily eating more and more sweet new high-calorie foods.

Today, this problem has reached the US military. In the 2012, a report was published in the US, which found that the number of recruits with obesity is growing rapidly (in contrast to Russia, where for each draft campaign to 45 000 recruits get a reprieve from the service because of a shortage of body weight). According to experts, every fourth American recruit is not suitable for military service because of excess weight. If we take into account the fact that approximately 75 percent. recruits are no longer fit for military service (criminal record, lack of education), in the case of a serious conflict, the Pentagon simply did not have enough resources mobilization.

Moreover, many of those who still held the selection of the military service, forced to take additional courses of fitness before you begin active service. The extra weight of military personnel also leads to an increase in the number of injuries and non-combat losses among personnel. Only on issues related to health care officers and men who are overweight, the US Defense Department spends about 1 billion dollars a year.

According to the health authorities of the US armed forces in the 2010 86, more than thousand. US military suffered diseases, one way or another been associated with excess weight. In connection with the latest cuts in the US budget, it was decided to dismiss soldiers who do not pass a fitness test. According to the New York Post, only in 2012, more than 1600, were soldiers removed from service because of obesity.

An alarming trend has forced management to review the training program. "Healthy and fit soldiers are vital to national security Our army must be physically prepared for any military operations, which can happen at any time and anywhere in the world." - said a Pentagon spokesman Leslie Hull-Ryde.

The servicemen strongly disagree with the arguments of the experts. In their opinion, the fitness test is so exhausting and stressful that even healthy soldiers and officers could hardly cope with it.

Tough measures to combat obesity have caused a huge response in the community of US troops. Desperate people are trying to find support in the media, blogs, social networks. Military personnel and their relatives complain that the authorities view them as a commodity. "My son fought for this country And now his wife and three children have nowhere to live!" - says one of the mothers, whose son suffered a knee injury while serving in Iraq and was later shortened. “The army is full of people who beg to be fired. But instead, they fire someone who really wants to serve!”

This situation forced us to recruit such recruits into the US armed forces, which ten years ago there could not have been, by definition, including people suffering from obesity.

However, the US armed forces are still planning to solve the problem of overweight in a radical way. The Pentagon suggested that scientists develop a technology to transplant brown fat cells, which helps burn excess fat deposits. Brown fat draws energy from normal fat cells, which helps to lose weight, even without exercise. Then this fat will be implanted in the patient and will help you lose weight quickly. True, there is still a lot of uncertainty about the miraculous properties of brown fat. In particular, it is unclear how sustainable the effect of losing weight will be, it is also unknown how brown fat affects metabolism in the long run. An alternative to the military program of brown fat transplantation is now a project of Ember Therapeutics, which is trying to create a drug that turns white fat into brown.

First Lady Michelle Obama also expressed a desire to help the US military cope with a national ailment. She intends to develop a special food program, which, for the first time in 20 years, will change the standards of nutrition for military personnel. In the near future, the US military will get more bran bread, vegetables and fruits.

Thus, obesity, according to experts, directly threatens US national security. If officials in the near future will not be able to change the trend, the new division "physical therapy" may appear in the US Armed Forces, as well as the secret special forces behind enemy lines who will eat all the food reserves, undermining the economy of a hostile state.

Ctrl Enter
Noticed oshЫbku Highlight text and press. Ctrl + Enter
We are
A great interview with Sergey Lavrov: about Ukraine, Obama and IranWhat you didn't want to know about England
Military Reviewin Yandex News
Military Reviewin Google News
298 comments
Information
Dear reader, to leave comments on the publication, you must to register.