Remote from the globe. "Task: to pit Russia with China. Not easy, but let's get started" 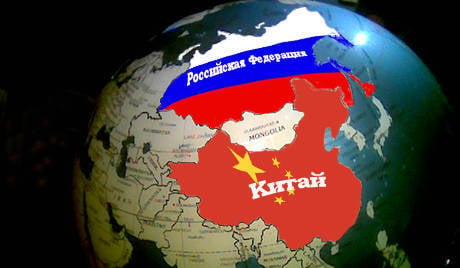 The topic of the “Chinese threat” for Russia and its unexpected popularity in domestic information sources is extremely relevant. The work of the American explorer Shona Mirsky, devoted to the blockade of China, was already mentioned on our website the other day. However, this text is curious enough to make out in more detail. He gives answers to some questions that concern the source of a topic so popular in the media. In particular, it answers the question of who and why will be the main “beneficiary” from the possible cooling of Russian-Chinese relations, which may occur under the influence of intimidation of our fellow citizens by “aggressive China”.


So, the study is interesting by the fact of a serious study of the possibility of the naval blockade of China by the United States. But this, in the end, is predictable - China is growing and stronger than other countries threatens the sole American domination in the world. We have to do something with these Americans. Actually, Sean Mirsky himself says that the sea blockade will allow to destroy the Chinese economic potential, since China is critically dependent on sea transportation in foreign trade, as well as in the supply of raw materials. Much more interesting are some of the findings of the study, which are necessary for a successful blockade of China measures. These measures have something to do with us.

A key factor in the success of such actions, Mirski considers Russia's involvement in the blockade of China: “... in stories China’s blockade has never succeeded without the tacit consent of the Russians. ” He admits that without the participation of Russia, the blockade of the PRC is technically impracticable for objective reasons.

At first, on other routes of movement of raw materials and goods - the US can have an impact. This may be political pressure on transit countries, and military strikes. For example, Mirsky considers attacking the transport infrastructure of those countries that China is currently trying to use as an alternative to maritime transport. It is noted that the PRC understands its vulnerability to the sea blockade and is making major investments in land access routes to the Indian Ocean, bypassing the straits.

Mirskiy considers impossible “military coercion” against Russia because of our defense potential. That is, there would be no potential - they would talk about the bombings not only of Myanmar, but also of us. And so - you need to look for other methods.

Secondly, Russia will be able to compensate for the blockade on other areas for China: “... for example, China may try to shift its entire international trade to the Russian direction, and even if the United States are inclined to support the United States, they will not be able to do it when they face with considerable pressure from their business community. " Read: the benefits of such trade will override any benefits of American support. In addition, Russia and Kazakhstan will be able to cover a significant part of China’s energy needs, which will also deprive the blockade of any meaning: “... Russia, on the one hand, will be China’s hope of overcoming the American blockade, on the other hand, it will also be for the United States the key to closing the transit route through Central Asia and preventing oil supplies to China. "

On this basis, the success of the blockade depends on the creation by the Americans of the anti-Chinese coalition by attracting neighboring countries, primarily Russia, India and Japan. And if it is planned to use Japan as a “cannon fodder” without shame, then from Russia and India direct military participation, thank God, is not yet required: “... Neither Russia nor India will have to participate in the American military operation, but they will have to tacitly support American actions through national embargoes against China. ”

Now the “tacit support” by Russia of such actions by the United States is considered by Mirsky to be an incredible and even fantastic scenario. However, if there is such a need, it means that it is necessary to work on its implementation — Americans are more inclined to work on changing the reality in their own interests than “waiting for mercy from nature”. And Mirski reads quite frankly what can change the situation from fantastic to possible.

He believes that Russia's fears of China may help in this: “The possibility of Russia's consent to US actions against China may seem ephemeral. However, Russian military officials often express concern about the growth of China and its encroachment on the Far East. The pressure of Chinese growth can be an incentive for Russian-American reconciliation in the future, as Russian leaders may decide that growing on the borders of China presents a greater danger than the troubled, but distant United States. ”

The question arises: will the Americans rely on the fact that “the curve itself will take out” and the Russian leaders embrace with military officials will alter the Russian policy in the right direction for the Americans, or are they ready to influence the situation? The answer is easily found in the same text: "The United States must concentrate on winning the battle for perception of China (as an enemy - A.G.) by three neighboring countries - Russia, India and Japan." That is, the work should be conducted with the public opinion of our countries. And something suggests that the "battle for perception" is already underway. There are a lot of “strained on the globe” facts and suspiciously persistent publications.

... Well: growing China is really closer to us than distant Americans. Perhaps that is why we are strengthening military cooperation with China, and not with the United States. Well, really, should we be interested in American domination and the dubious benefits of “friendship” with them? The consequences of American domination still did not benefit anyone, except for the Americans themselves. We should be interested in our own domination and our own growth, and not the attempts of “distant and problematic” Americans to remain the dominant force where nobody needs them.

I would like to add one replica to what my colleague said. Not only our mass consciousness is processed within the framework of the "solution of the Chinese question": the Chinese, too. If someone watched the second film about Kung Fu Pandu, he will remember: there the plot is built around a negative character on the imperial throne of the Middle Kingdom, who wants to interrupt the blessed isolation of the country and go to conquer foreign lands. The positive heroes are actually engaged in the fact that they are smashing the navy (!) Of their homeland. So as not to interrupt silence, smoothness and Taoist grace.

Taking into account the natural inclination of Chinese civilization to stinging in itself - figures from Hollywood know what to put pressure on. By the way, the American big-budget X1980-90-x films about Russia were put on quite organic Russian "only there would be no war." As a result, we got a lot of these wars everywhere.

Ctrl Enter
Noticed a mistake Highlight text and press. Ctrl + Enter
We are
Is China's naval blockade in case of war realistic: opinionsAbout the possibility of China’s naval blockade
105 comments
Information
Dear reader, to leave comments on the publication, you must to register.