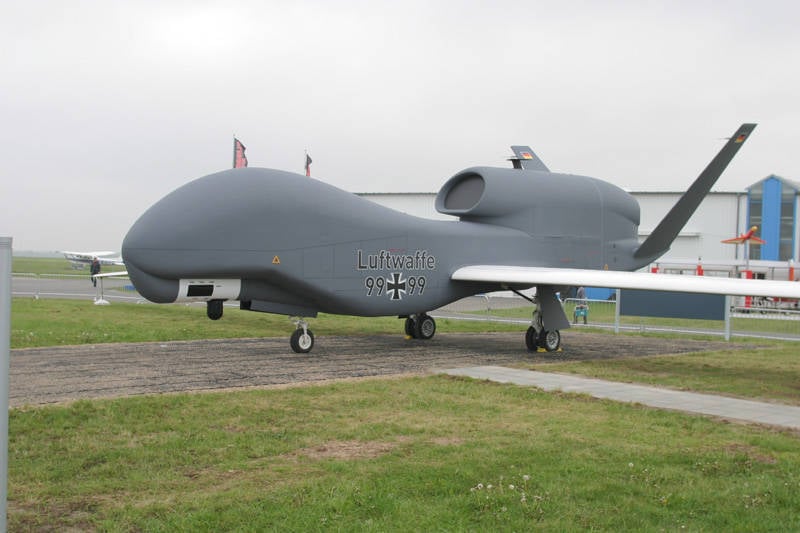 
As stated by Lieutenant Colonel Roland Runge, head of the offensive weapons, tactical aerial reconnaissance and unmanned systems of the German Air Force, at an IQPC conference in London devoted to air reconnaissance and surveillance equipment, high-altitude UAV equipment of long duration (HALE) will be transferred to the German Air Force immediately after the completion of flight tests, providing for a comprehensive inspection of the on-board equipment, reports the International Defense Review.

In addition to the first flight tests that took place in January 2013, the program also includes 13 flights, the number of which, if necessary, can be increased. Simultaneously with the transfer of the Euro Hawk UAV to the German Air Force, the implementation of the 30-month contract for the maintenance of material and technical services, which will include troop tests, during which the German Air Force will gradually assume responsibility for the operation and technical support of the UAV, will begin. According to R.Runge, this stage can be extended (if necessary) by 12 months, however this condition has not yet been taken into account in the contract.

The delay in the implementation of the program was caused by problems with obtaining a certificate of airworthiness. Due to the fact that Germany is the first foreign operator of the Global Hawk UAV, preparations for the vehicles were preceded by measures to bring the infrastructure of the German Air Force into compliance with the requirements of the NATO standard STANAG 4671, which regulates the operation of unmanned systems. Flight tests of reconnaissance equipment were carried out after obtaining a preliminary certificate of airworthiness. As envisaged, pre-certification will be complemented by departures in conditions close to combat, for example, takeoffs and landings with a strong headwind, which is typical of the main operating base of the German Air Force "Schleswig-Yagel" (on the Baltic coast).

The Euro Hawk UAV reconnaissance equipment test program is conducted in two areas in the airspace of the Federal Republic of Germany in the south of the country (length of 274 km from north to south and 48-97 km from east to west) and one in northern Germany, as well as two routes of flight , due to which the possibility of making flights between these zones at heights of 50000 feet (15250 m) and more.

Currently, Germany is working to obtain permits for access of the Euro Hawk UAV into the airspace of other states. It is expected that the discussion process will be easier with the NATO member states of the AGS (Airborne Ground Surveillance) ground-based aerial reconnaissance system. The project also uses the Global Hawk RQ-4 UAV as a platform. Obtaining rights to fly across the continental territory of Europe will significantly increase the efficiency of the use of UAVs in areas of combat use. Otherwise, the apparatus will need to make long flights over the water surface.

Currently, during the flights of the Euro Hawk UAV in the airspace of the Federal Republic of Germany, the ground-based detection and warning system developed by ESG GmbH (Germany) is used. The system allows you to collect data from civilian and military ground radars in order to form a single image of the airspace in the area where the UAV is flying, and transmit information to the ground control station. This system can later be used in areas of combat use of the device outside the Federal Republic of Germany.

R. Runge also announced that at the end of the current decade, the military leadership of Germany plans to purchase four Global Hawk RQ-4 UAVs in an X.NUMX unit in a configuration similar to those purchased under the AGS program. The UAV data will be nationally subordinate, and can also be transferred to NATO as a contribution to the AGS project. The feasibility of this project will depend on the availability of funds, as well as the possibility of obtaining a certificate of airworthiness.

In the future, the command of the German Air Force is also considering the possibility of controlling the Euro Hawk UAV from the Sigonella airbase (Sicily Island, Italy) in order to more effectively accomplish tasks in the Mediterranean. According to R. Runge, it is planned to start negotiations on this issue with the Italian government and the US Air Force command (as the state responsible for organizing the operation of the Global Hawk UAV at this airbase). However, these plans can be implemented only after obtaining permission to fly the UAV through the airspace of other countries.