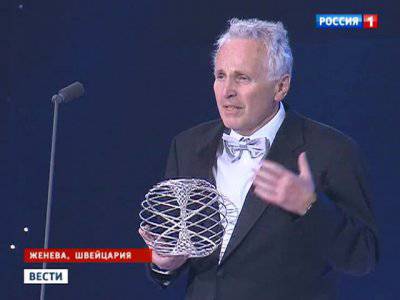 The Russian scientist Alexander Polyakov became the winner of the largest scientific award in the field of fundamental physics. On the eve of Geneva, a solemn presentation of awards took place: metal balls - symbols of the award - and cash rewards. The size of the prize is twice the Nobel - 3 million dollars.


27-kilometer tube collider rests from trying to recreate the moment of the Big Bang. The magnets and detectors of the Large Hadron Collider are disassembled for modernization, and for physicists it is time to change sweaters and jeans for tuxedos and evening dresses.

Dr. Janotti shared with her six colleagues a special prize of three million dollars for the discovery of the Higgs boson. The last detail of the standard model describing the diversity of the particles of which we are composed has fallen into place. But much more physics is left outside the standard model.

"We will focus on the search for dark matter, which is 25% of the mass of the Universe, try to find out what the nature of the imbalance of matter and antimatter is, whether there are any additional interactions and measurements in the Universe," said Atlas experiment leader Fabiola Janotti.

In understanding the forces governing the universe, a man who is chained to a chair and communicating with the world with the help of a voice synthesizer has advanced further than many. Another laureate of the special award is Stephen Hawking, who explained why one should not be afraid of “black holes” either in space or on Earth.

The “black hole evaporation phenomenon” was really predicted by Stephen Hawking for the first time. And it is directly related to the threat of black holes in the collider. , therefore, they will not pose any threat, "explains the founder of the special prize in fundamental physics, co-owner of Mail.Ru Group, Yuri Milner.

But what calms the public, physicists forced to clutch at the head.

If the black hole evaporates, where does the information that it had swallowed go? The paradox that shook the foundations of quantum physics found a solution in the theories that say that particles are actually strings, fluctuating not only in our four-dimensional space-time. Is this true, how many measurements in the Universe are in fact even the laureate of the main prize, Alexander Polyakov, can only assume.

"It always reminded me of the implementation of the idea of ​​Plato, who spoke. That we are like people sitting in a cave. We see a reflection of outdoor shadows on the wall of the cave. And we do not understand that there is a whole world (outside)," Plato explains situation in modern physics, laureate of the prize in fundamental physics, professor, specialist in quantum field theory, Alexander Polyakov.

So the collider will not remain without work. The detectors are more sensitive, the energy increase and then, perhaps, it will be possible to confirm the theory by experiment. And someday, and create a picture of everything, which will explain, not only how the universe works, but also why it is as it is.

For three and a half years of work of the Large Hadron Collider, physics stepped away. And, of course, the prospects for upgrading the collider are charging scientists with optimism. Many believe that the work for which 21 in March 2013 was presented with awards, in general, can be completed in this millennium.

Ctrl Enter
Noticed oshЫbku Highlight text and press. Ctrl + Enter
We are
Ex-Secretary of the Nobel Committee called the award of the peace prize to Barack Obama a mistakeIn search of a national idea: a project for choosing the main symbols of Russia
Military Reviewin Yandex News
Military Reviewin Google News
25 comments
Information
Dear reader, to leave comments on the publication, you must to register.